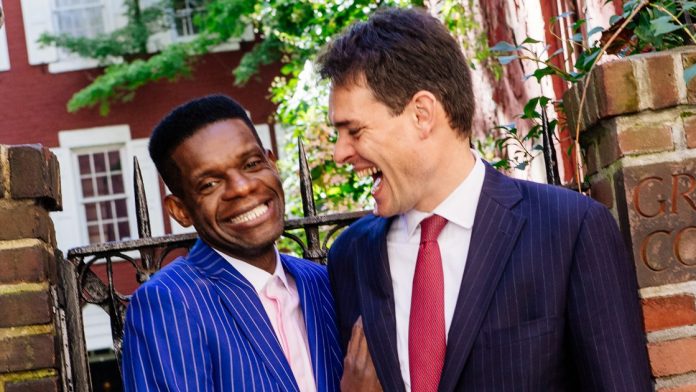 Fashion designer Victor Glemaud, who is known for his bold, colorful knits and unexpected silhouettes, and diplomat Jacques Flies initially made contact with each other on the dating app Grindr. After a few DMs, they decided to meet IRL at Jack’s Wife Freda, a popular downtown New York bistro with tile floors, exposed brick walls, and great coffee. “Four years of dating later, and our relationship grew deeper and deeper. It just seemed natural for us to marry,” Victor remembers. “It was more of an organic process than a formal proposal.”

The wedding date was officially set for October 12, and Victor and Jacques went about planning their city wedding themselves. “We both love the food and decor at the restaurant Palma in the West Village—especially the abundance of fresh flowers,” Victor explains. “It was our only choice, and luckily, we were able to book it far enough in advance.”

The two men approached their wedding day looks very differently. Jacques wore a navy blue pinstriped suit by Paul Stuart with a white shirt and an Hermès tie—all of which he already owned. Victor, on the other hand, put a lot of thought into every aspect of his attire. “I rarely wear suits—but I knew I wanted something colorful,” he says.

In August, he and his best friend, Hanuk, went to all of the designer shops. “Everything felt too fashion-y and very expensive,” he says. “We ended up going to Paul Stuart on a whim, a place I’d been to many times before when suit shopping for Jacques but never for me. I explained to our sales associate Rick what I was after; he sized me up and came back with this royal blue pinstripe suit. I tried it on, had the length and sleeves done, and it was finished. It took less than 30 minutes.” The two friends then celebrated at Hillstone with martinis.

“A few weeks later, I texted Jake Mueser of J. Mueser asking if they would make a shirt for the wedding. They graciously fit me into their schedule, and I chose a bold pink textured shirt with a white collar. They embroidered our wedding date into the shirttail—such a brilliant touch!” Victor completed the outfit with oxblood Hermès shoes.

On the wedding day, Jacques and Victor met their families at City Hall. “It was heartwarming to have folks come from all over the country for it,” Victor says. “I was a little nervous in the beginning [at the start of the ceremony], but overall, it was just so happy. The service was joyous and upbeat throughout, and our officiant, Angel Lopez, gave it such a nice personal touch. His voice is unforgettable and everything ran so smoothly.”

Afterward, everyone gathered at Palma, where they were handed glasses of prosecco upon entry. “We wanted the reception to be casual and fun!” All of the center tables in the garden room had been removed to create a more social atmosphere to the afternoon, and the festivities kicked off with a long cocktail hour, where everyone got to reconnect with friends and family while eating the salumi misti and bruschetta that was served up. “The weather was exceptional,” Victor remembers. “Palma was able to open the solarium ceiling, giving our mid-October reception a breezy alfresco feeling.” For lunch, insalata mista, arancini balls, and provençal tomato tarts were served as appetizers, followed by spinach agnolotti and risotto ai fungi as primi, and finally, branzino and grilled steak tagliata as a secondi, buffet-style. The wedding cake was from Morgenstern’s and was a combination of burnt honey and smooth strawberry ice cream, with coconut cake topped with meringue.

During the sit-down lunch, Vogue’s Fashion Director Virginia Smith toasted her dear friends, followed by Victor’s sister Fabienne Glemaud and Jacques’s brother Tom Flies. “When it was all over, we left for our honeymoon in Buenos Aires the very same evening,” Victor says. “Palma packed us husband-and-husband meals, which we devoured in the lounge!”