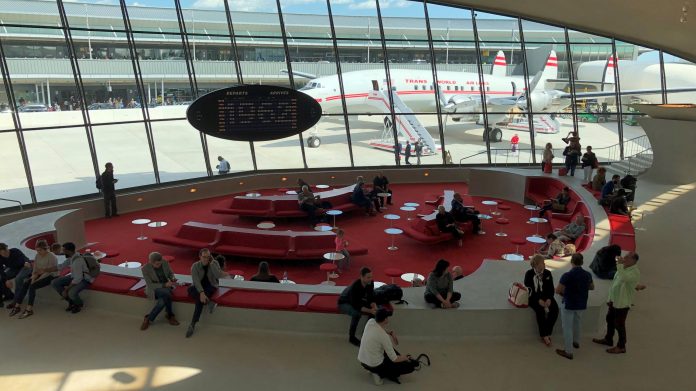 The new TWA Hotel at JFK Airport’s Terminal 5, which officially opened May 15, is one heck of a ride.

Walking in from the front entrance, you almost feel like you’re about to check your luggage and go on a trip (and if you’re staying here, you very well might be).

Inside the Connie at the TWA Hotel: It’s a plane! But it’s also a cocktail bar.
Jeanne Muchnick, The Journal News

What strikes you first: the large Solari Split Flap Sign which announces airline’s arrivals and departures. There are two here, one which overlooks the tarmac in The Sunken Lounge in the lobby and one by the information desk which is visible the minute you walk in the door. And no, your eyes aren’t deceiving you: some of the flights on the board include defunct airlines from the golden jet age of travel like Pan Am, Republic, and, naturally, TWA.

To the left of the board is the check-in area complete with a movable luggage conveyor belt that, though it looks like it will take your luggage to your plane, actually stores it in a lower level room for those who need that service.

Though the check-in desks are not original, they’re inspired by the era and include modern touches such as iPads for touchscreen service.

The same desks are also on the other side of the hallway in what’s called the Departures Hall Dining area where they’re used as food stalls for vendors such as the Halal Guys, Antico Noè, Empanada Republic, Earl of Sandwich, Fresh&Co, and Playa Bowls.

Aluminium tables and chairs meant for grabbing a quick bite are scattered in this area between TWA memorabilia like a sky blue 1966 Chrysler Newport, old TWA uniforms, 1960s era suitcases and luggage carts.

Thank you! You’re almost signed up for Lohud Food

Keep an eye out for an email to confirm your newsletter registration.

Walk up the stairs from the first floor and you’re immediately taken in by The Sunken Lounge, the virtual heart of the hotel, with bright red carpeting, red seating, red-upholstered Saarinen tulip stools, that second Solari Split Flap Sign and wide windows offering views of a decommissioned 1958 Lockheed Constellation airplane, affectionately known as “Connie,” now reconfigured into a 125-seat cocktail bar.

The Sunken Lounge at the TWA Hotel. (Photo: David Mitchell)

While Connie offers prime cocktail seating, The Sunken Lounge (run by the Gerber Group, operators of The Campbell in Grand Central Terminal) is also where folks can order aviation-friendly drinks such as the “Come Fly With Me,” a vodka-based drink with St. Germain liqueur, prosecco, and lime juice.

To the sides of The Sunken Lounge are long, red carpeted tube-like hallways, famous from the Leonardo DiCaprio movie “Catch Me If You Can,” that connect to Jet Blue’s Terminal Five.

Halfway down them, you’ll also find elevators which lead to the rooms; there are 512 total. There’s also a rooftop lounge with an infinity pool (open year-round) complete with a TWA logo on the bottom. The lounge will eventually serve cocktails and light bites (it was not open when I visited).

The lobby also features the terminal’s original white penny tiles, Instagrammable rotary phones advertising that a phone call is 10 cents, a retro-looking newsstand with Life Magazines, a shoeshine stand, and, a TWA shop where you can buy TWA cards, TWA sneakers, toiletries or towels, among other items.

Hop aboard: Steps leading up to the Connie, the refurbished airplane turned cocktail lounge at the TWA Hotel. (Photo: Jeanne Muchnick)

You’ll need reservations for this 125-seat Instagrammable cocktail bar, bookable up to 60 days in advance, where you can enjoy a drink from your plane seat (lots of leg room here!) or from a red stool. Just like the old days: a server will roll carts down the aisle featuring drinks of your choice.

Just as fun: peeking inside the cockpit with the original seats and instruments from 1958. It’s another Instagram moment; you just have to wait your turn.

Fans of “Mad Men” will recognize the rooms, which look like something out of a Hollywood set with the kind of couch that would have easily fit in Don Draper’s office. Upping the charm: each room features black rotary phones (converted for use on a digital system), Life Magazines on every desk and TWA toiletry packs in the bathroom that are a replica of what the airline used to offer.

In keeping to that ’60s theme, there’s a sizable cocktail bar, though, warning: no coffee maker.

The hotel room at the TWA Hotel is fitted with retro furniture and accessories including a Life Magazine on every desk. (Photo: Jeanne Muchnick)

Rooms start at $249 per night and you have our choice of options for either a JFK runway view or one that looks into the hotel itself.

Along with cocktails, The Sunken Lounge serves light bites such as a soft pretzel, hummus, cheese and charcuterie boards and marinated olives. The Paris Cafe, run by famed French chef Jean-Georges Vongerichten, is where breakfast, lunch and dinner are served. (While the decor may be 1962, the food at the Paris Cafe definitely caters to 2019 with items such as salads, tuna tartare, barbecue chicken, and black-truffle pizza.)

Its adjacent Lisbon Lounge also features light snacks and cocktails. It’s also, presumably, where you wait (this is an airport hotel after all) for a spot at the Paris Cafe since you’re no doubt hungry from traveling and need something more than bar food.

In between there’s The Champagne Bar.

Long story short: There’s lot to drink but not quite as much to eat.

There is, however (since you can’t get it in your room), coffee: A host of Intelligentsia carts are placed throughout the hotel featuring pastries from Manhattan’s Supermoon including a matcha white chocolate croissant, salted caramel doughnut, strawberries and cream doughnut and chorizo and sundried tomato brioche.

There’s also the aforementioned Departures Hall Dining area where more vendors are expected to be added.

The Paris Cafe at the TWA Hotel. (Photo: Jeanne Muchnick)

One flight up (no pun intended) on the Mezzanine Level is where you’ll find an area straight out of a fashion catalog devoted to crew uniforms with information about the designers (think Valentino and Ralph Lauren) and the era behind them.

The New-York Historical Society will curate the exhibitions, which will be expanded to include authentic artifacts, interactive displays, in-flight amenities such as gilded playing cards and silver serving ware as well as personal narratives from former TWA employees.

Evolving shows will initially focus on two major themes: Trans World Airlines’ history — including eccentric billionaire Howard Hughes’ tenure as the airline’s owner — and Finnish-American architect Eero Saarinen’s original development of the terminal at JFK. Future exhibits will delve into the dawn of the Jet Age in New York City, as well as the mid-century modern design movement.

TWA Hotel is near JetBlue at Terminal 5 at JFK Airport, www.twahotel.com