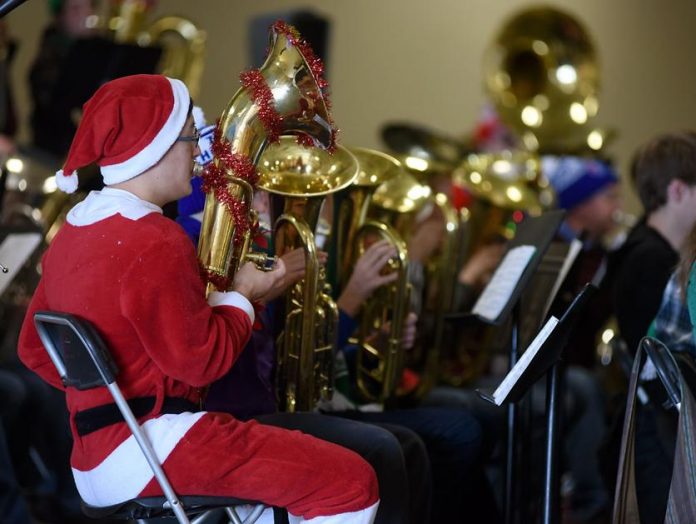 Kristen Nies, wearing a bright green Christmas vest and scarf, paused from practicing her tuba. Her daughter, Nola, wanted to give her a hug for good luck.

On Saturday, Nies sat among about 80 other musicians holding tubas and euphoniums in the Columbia Mall. They were warming up for the annual TubaChristmas concert, which brings together musicians of all skill levels to play a public concert and “improve the literature and public image” of the instruments, according to its website.

“This is my eighth or ninth TubaChristmas,” Nies said. “I used to do it just for the fun back when I started, but now it’s become a reason to come and play music to share with my daughter. It’s joyful, being able to share something I love with her.”

Every musician wore a Christmas sweater or Christmas-themed clothes — some even with Christmas lights strung across their instruments, flashing bright colors to match their sweaters and patterned hats. The Christmas lights outshone the room’s lights.

“All the Christmas sweaters and decorating the instruments wasn’t planned,” said Logan Banker, 16, performing in her third TubaChristmas. “Everyone just kind of wanted to get in the Christmas spirit.”

Family and community was a common theme throughout the large, auditorium-like room where the tuba players were performing. Every seat was filled. The walls were lined with parents, grandparents and spouses taking pictures, waving to family members and watching small children wearing Santa hats chase each other around the room.

The guest conductor, Aaron Wacker from the University of Tulsa, paused between a few songs to ask the parents and music teachers to stand for a round of applause.

“You have been tasked with the important job of teaching young musicians,” he said. “Thank you for all that you do.”

“O Come All Ye Faithful,” “God Rest Ye Merry Gentlemen,” “Jingle Bells” and “O Little Town of Bethlehem” were among the set list. Wacker encouraged the audience to sing along to the music whenever he directed, and the audience joined in with some giggly singing during “Deck the Halls” and “Silent Night.”

Because they were performing in such a large room, the music echoed off the walls and carried outside to the rest of the mall. Even the floor reverberated with the sound, especially during the song “Noel.”

“It wasn’t scary at all,” Banker said after the show. “There’s so many experienced performers blended into the sections that love to help. Besides, the main goal is just to have fun and play some Christmas music.”

Wacker agreed with that sentiment.

“TubaChristmas isn’t about your skill level,” he said. “We have a wide variety of players here, the youngest being 13. It’s about the music and enjoying it together.”

Even with a large age range between the volunteer musicians, they all felt a sense of camaraderie just from playing together.

“Most of them are established musicians, no matter the age,” said Angelo Manzo, the event organizer, and an associate professor for MU’s School of Music. “The older players encouraged the younger ones.”

The concert ended on a high note with “We Wish You a Merry Christmas,” and the performers received a standing ovation with clapping and whistles. Several children jumped up to run to family members to give congratulatory hugs.