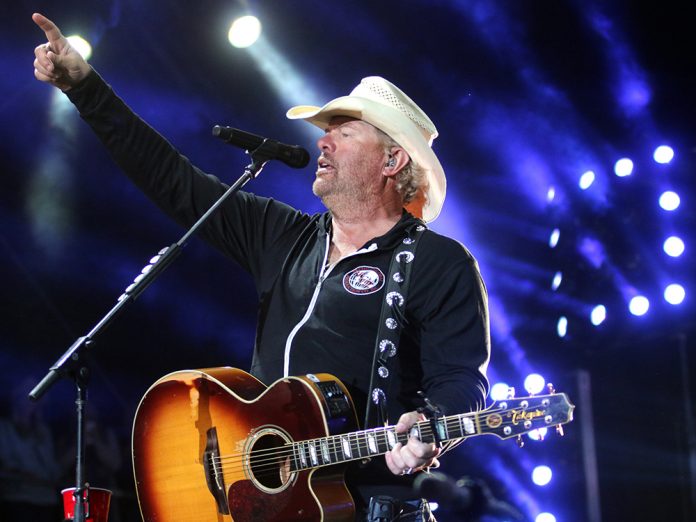 It’s kind of hard to top Beer for My Horses as a Saturday night anthem at an Alberta country music festival.

Once Toby Keith got past the stars-and-stripes forever portion of the opening of his show — a video of American soldiers in action while AC/DC’s War Machine played over the speakers — he brought his whiskey soaked baritone — which admittedly sounded great — back around to a few of the rest of country music’s favourite things, like horses, getting drunk and family.

Then he launched him into Beers Ago, an anthem just about everyone in the slightly chilly, and somewhat sedate Saturday night crowd could probably relate to anyways, even if the seasons appeared to be changing between the opening act and closing time Saturday.

Keith wore his redneck street cred right there on the bent brim of his cowboy hat, and in irresistibly catchy tunes like A Few More Cowboys — but his musical arrangements told a more nuanced story.

For one thing, there was a horn section, that brought a bit of a calypso vibe to Beers Ago, followed by a Hammond organ, which threw in a little Motown sound to Keith’s impressive musical gumbo.

(Later in the set, Keith delivered the tune everyone was there to hear: Red Solo Cup, the ode to every festival goers favourite beverage container.)

But for all the red, white and blue tint of Keith’s set, the tone Saturday was set more by a trio of Canadian country artists who told stories, and showcased another side of country music, maybe because the songs  were created by artists from this one.

Remember eight days ago, when the hottest day in Calgary history happened?

That was long gone in the rearview of a thousand Ford F-150’s Saturday, as the temperatures dropped down in the smoke at Prairie Winds Park, making it feel as if summer was done.

Dean Brody, on the mainstage, felt it too, as he introduced his mariachi-flavoured summer song Good, Goodbye, an ode to tying one on on the final day of your Mexican all-inclusive in order to savour your vacation to the very last drop.

Brody, who has won 16 Canadian Country Music Awards, has a low key friendly charm — all of these Alberta country singers ought to copyright that — that shrinks the festival sized venue down into the feeling of a saloon, in the quiet part of the night.

He was at his melancholy best on Monterey, a tune about the time he spent on the California coast, and on Dirt, a song about his ongoing love affair with the stuff (“Heaven was a shovel and a two foot hole.”)

His laconic charm fit nicely into a day that was driven by Canadian country voices, (even if that included Restless Heart, an American country quintet that’s been together for 35 years).

Sandwiched around Restless Heart though were Brody and earlier in the day, Madeline Merlo, a CCMA Award winner in 2015 for Best New Artist.

Merlo, who opened for Brody on his 2017 Beautiful Freakshow tour, was a combination of a lot of things — a little bit Taylor Swift, with some pop and jazz leanings thrown in for making it completely confusing for radio stations to pigeonhole her.

She was breezy and warm onstage Saturday afternoon, chatting up the front rows of the huge mainstage, while tossing out t-shirts.

On The Drunk Girl, she sang an ode to the instant BFF’s women sometimes become in the women’s bathroom at the club, when they’re loaded and the ladies room becomes an emotional sanctuary.

Neon Love, her summer single, on the other hand, was pure summer country pop.

On the second stage, meanwhile, tucked on the other side of the hill on the Country Thunder site, Ben Chase played a set that started out being listened to by dozens – a lot of them sitting at picnic tables where they chowed down on Dogfather sausages, Pizza 73, Taber corn and cookie dough burritos, just some of the stuff being sold at the street food trucks that turn Country Thunder into a small village.

Calgarian (by way of P.E.I.) Chase — playing a set of largely cover tunes that ranged from Eminem’s One Shot to Springsteen’s Cadillac Ranch to Bryan Adams Summer of 69 — turned the intimacy of the second stage (which also has a dance floor in front of it) into a weapon. By the end of his set, there was 150 people line dancing in unison, and people were whooping and hollering like it was last call, not a 5 p.m. show on the second stage.

Meanwhile, on songs such as Wheels Stare at Me, which told the story of a trucker lost in his thoughts on some endless interstate run, and Basin Street, a ditty about New Orleans, Restless Heart captured that longing for a lost opportunity that a good country tune can capture better than just about any other medium.

And after nearly four decades of playing together, the faces of the band finally matched the weariness of the words, too.