Home Bedroom This Robin in a Sun Hat (and the Government) Want You to... 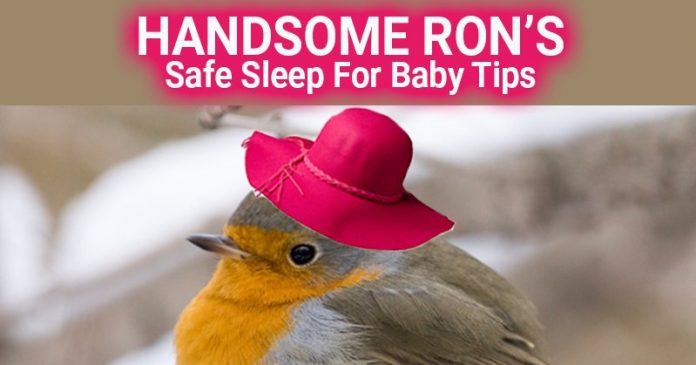 The acting chairman of the United States Consumer Product Safety Commission, Ann Marie Buerkle, wants to keep you safe this holiday season. Handsome Ron would like the same.

Handsome Ron is one of the many characters that Joseph Galbo, the commission’s social media specialist, developed to put a fresh spin on tried and true safety tips. Via the agency’s Twitter, Instagram and Facebook accounts, Mr. Galbo takes the C.P.S.C.’s standard safety messages and, as he thinks of it, puts them “in a fun wrapper.”

To create that fun wrapper, he pairs whimsical graphics featuring recurring characters, like Handsome Ron, a sun hat-sporting robin inspired by Ron Swanson from the television show “Parks and Recreation,” or Forcefield Baby, one of Mr. Galbo’s early creations, with text-based safety messages about topics ranging from Halloween costume dangers to not walking while texting.

“We have a challenge at the C.P.S.C. to get what we consider extremely important information to the consumer. There’s just so much noise out there, and so one of the avenues that we’ve chosen is,” Ms. Buerkle said with a laugh, “I’ll call it nontraditional.”

Mr. Galbo is aware that he needs to walk a fine line with his messaging. “The mission of the agency is to protect consumers, and that’s something we always have to be working toward,” he said. “So even with the crazy names and the zany characters and the pictures of birds, it’s important that people are learning.”

Stand by your pan

According to the commission, cooking is the No. 1 cause of residential fires — and as the holiday season gets underway, that number triples, with some 1,800 kitchen fires occurring on Thanksgiving Day alone.

There are simple steps to take to stay safe while cooking, starting with not leaving food unattended on the stove or in the oven. “Stand by your pan!” one clever C.P.S.C. graphic reminds you — and when it’s put that way, who could forget? While cooking, avoid wearing loose clothing or long sleeves that can catch on fire, and keep flammable items like potholders and paper or plastic bags away from the stove.

Perhaps most critically, check that there are working fire extinguishers and smoke detectors in your home. “Many of these safety tips apply year round,” Ms. Buerkle said, “but certainly during the holiday season, when people are cooking more, we see the number of incidents go up.” As the commission’s Twitter account will remind you, not all heroes are smoke alarms, but all smoke alarms are heroes.

Fire hazards abound during the holiday season, and not just in the kitchen. Holiday décor like Christmas trees, candles and holiday lights can also take a quick turn for the dangerous.

If you have a live Christmas tree in the home, make sure it has plenty of water, because dry trees are a major cause of home fires during the holidays — the commission estimates that there are 100 Christmas tree fires annually — as this video dramatically demonstrates.

Artificial trees, too, can be fire hazards and so, when buying one, the C.P.S.C. advises looking for the “fire resistant” label. Christmas trees, whether real or artificial, should be placed well away from heat sources like fireplaces, vents and radiators.

Keep lit candles away from flammable items, so when setting up a menorah or kinara, take note of its surroundings; all burning candles should be placed on a stable, heat-resistant surface where children and pets cannot reach them or knock them over. Burning candles should be kept within sight and extinguished before leaving the room, and wicks should be trimmed to a quarter of an inch.

Holiday lights with broken or cracked sockets, frayed or bare wires or loose connections can also start fires, and each set of lights, new or old, should be checked before being hung.

The right age for the right toy

When shopping for holiday gifts for children, Ms. Buerkle stressed the importance of heeding age labels to buy age-appropriate toys. “Parents want to think their child is ahead of the curve and they’re really smart,” she said. “But the age determination, or grading, means something.” Ms. Buerkle warns that buying a toy graded for an age older than its recipient could have small parts that make it unsafe.

If you’re looking for categories of toys to avoid entirely, look no more: The majority of toy-related deaths involving children under 15 are caused by riding toys, like nonmotorized scooters and tricycles; toys with small parts — including small balls — which are choking hazards; and perhaps surprisingly, balloons. (Uninflated balloons pose choking or suffocation risks to young children, and their strings are a strangulation risk.) If you do buy a riding toy, be sure also to buy protective gear, like helmets and pads.