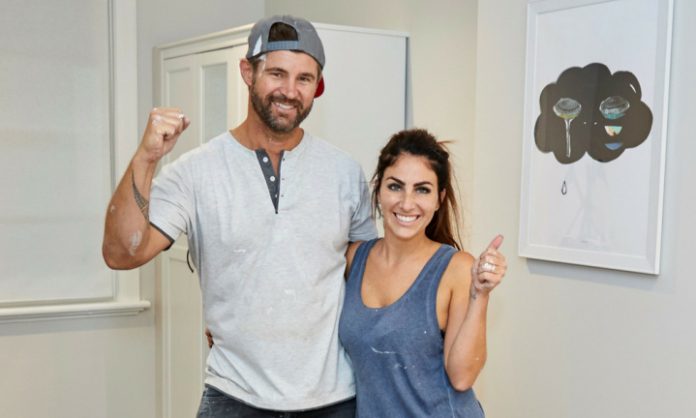 Three of the five couples used the ceilings, in the small rooms, as a feature.

The Block has kicked off a new season, with five new teams tackling a mammoth renovation of the 58-room, 1937 hotel The Gatwick at St. Kilda in Melbourne.

The first look at this year’s teams styling talents came in a 48-hour challenge to complete a children’s bedroom.

While all five couples showed off a different style, three of them used the ceiling as a focal point, almost all of them had animals in the décor, and three of the couples were pulled up for putting furniture under windows – a big no-no in a kids’ space.

See more of the rooms below.

The judges – Darren Palmer, Shaynna Blaze and Neale Whitaker – all loved the bed and separate play space including the little teepee, and “circus tent” bedhead.

Neale said it had a really “lovely feel” and Shayna agreed, “This says ‘kids’ straight away”.

Second place was Kerrie and Spence.

Builder Spence knocked up an elegant coffered ceiling in the short two-day challenge which seriously impressed the judges – they couldn’t stop looking up. It was one of the biggest ‘wow’ moments of all of the rooms.

The couple were looking to create an “elegant and modern” room suitable for a teenage girl.

Shaynna called them a “team to be reckoned with”, but didn’t think the design fit the kids’ room brief.

Kerrie and Spence’s room was designed for a teen girl. Source: Channel Nine.

They wanted to design an elegant and modern room. Source: Channel Nine.

Netballers Bianca and Carla finished third with their girls’ room which had bunk beds and little play area. Their whimsical room was finished off with a striking black ceiling and a pendant light – which was broken – but would have created a starry night effect.

“It’s clear how magical it would have looked with the light,” Shaynna conceded. Neale said it felt like the room “came from the heart”.

Mum and dad team, Norm and Jess, didn’t finish their girls’ room inspired by their daughter Matilda. But the judges could tell they had put a lot of thought and energy into the room with its pretty canopy and bed with storage.

The judges thought the room “felt beautiful” but attention to detail brought their score down.

Storage is always a win with Shaynna. Source: Channel Nine.

The couple thought of their daughter when designing the room. Source: Channel Nine.

The couple with no renovating experience finished last with a room themed on adventure and travel. Courtney and Hans painted the ceiling like a sky full of clouds, and fitted the room with mini flying toys and hanging air balloons – suitable for the couple who work in the airline industry.

The judges liked the cloud design, but the quality of finishes did not impress.

The judges liked part of the room, but not the finishes. Source: Channel Nine.

Courtney and Hans did their best for no renovating experience. Source: Channel Nine.