Home Bedroom Step inside this personality-filled semi in Nottinghamshire 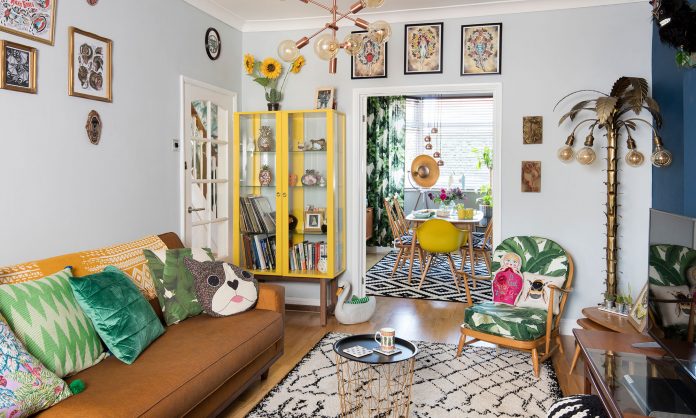 The owner has transformed a bland semi into a home full of vibrancy, and then added a slice of family history for good measure

‘Buying a home with no character turned out to be a good decision,’ says the owner about her three-bedroom semi. ‘The original decor was really boring and not to our taste at all, but it did mean that we wouldn’t have to spend too much time or money getting rid of someone else’s vision of beauty.’

And with no structural work of note to be done, the owner and her partner knew they could concentrate on turning the place into a home to love, rather than worrying about knocking walls down or replacing the kitchen.

The couple were lucky that the structure of the three-bedroom semi, built in 1929, in Mansfield, Nottinghamshire, was sound. They also liked the layout, so they didn’t need to do any building work.

‘We were lucky enough to have a gap between leaving our old place and moving in here so when we got the keys we had a decorating party, and with the help of friends and family we got the majority of the painting done in just one weekend,’ the owner says.

‘I follow a few interiors blogs on Instagram so I had already spent a lot of time discovering which colours I liked,’ she adds. ‘Then I looked on Pinterest to see what they looked like in real rooms, so I had most of my design ideas pretty much in place straightaway.’

The look the couple has created is eclectic because of their love of mixing vintage furniture with modern classics. ‘I also like to keep the look fresh and up-to-date by displaying contemporary art work on the walls and choosing high street accessories to style the rooms. Though I like to ring the changes so am often moving bits of furniture around or changing the cushions,’ the owner says.

‘I spent a lot of time with my Grandma when I was young and she had lots of Mid-century furniture,’ the owner says. ‘So I grew to love this style even before it became cool. I like the gentle curves and simple beauty of the designs, and they were built to last so original pieces are as good as they ever were.’

Since then she’s hunted down sideboards, tables and an Ercol Windsor armchair that she had re-upholstered in palm print fabric.

The owner found out that G-plan had re-released the same style sofas that they sold in the 1960s so she bought the Fifty Nine corner sofa from Atomic Interiors for when they moved in. ‘However, because the downstairs is mainly open plan, I forgot to factor in the living room door, so when the sofa arrived I had to reconfigure the layout of the room, but now I think the sofa works well as a room divider between the kitchen and lounge area,’ she says.

Choosing the blue for the living room kept the owner up at night because it wasn’t as popular then as it is now, so she couldn’t find many pictures for inspiration. ‘I finally found this Midnight Blue Sonata from the Valspar range at B&Q which was perfect, and we initially decided to paint the whole living area this colour.’

‘However, being in the middle of the house with no direct natural light meant the room was very gloomy in the day, so we quickly decided to keep it to one wall and chose a light grey for the rest of the walls to brighten the space,’ she says.

Looking to redecorate? See all of our dining room ideas!

The owner has an eclectic style rooted in a love of original mid-century modern furniture, though due to it’s current popularity, it’s easy to find modern high street versions, like the Hartwell dining table that the couple sourced new.

About four years ago, her Gran passed down her Ercol Goldsmith dining chairs, which the owner had painted mint green. ‘Sacrilege, I know, though I’ve since had them stripped back and have learnt from my mistake,’ she admits.

‘I like to mix and match my vintage crockery with modern buys,’ the owner says.

‘We haven’t done anything to the kitchen apart from changing the walls from a dark grey, which made the room feel small and pokey, to this gorgeous mint green,’ the owner says.

She’s made the kitchen her own by filling the surfaces with her quirky collection of flamingos, pineapples and cactus storage pots. The simple white units and black worktops were in good enough condition, as was the flooring, for this room not to take a priority. ‘Eventually we’d like to re-do it with black units and wood worktops,’ says the owner.

The flamingo wallpaper in the downstairs bathroom feels luxurious with its slight sheen and raised texture, and is in keeping with the owner’s flamboyant, bold decorating style.

Get the look
Buy now: Flamingos by Albany, £18.98 per roll, Wallpaper Direct

The owner is really pleased with the colour scheme in her bedroom. ‘I think the green walls in our bedroom against the mustard yellow of the headboard,  was the best style choice I made,’ she says. ‘The colour combination makes me so happy and I find it incredibly calming.’

‘I’m always hunting for colourful, interesting bedding, which can turn a functional room into something special,’ says the owner.

‘I love the way my home makes me feel, I think it calms me down,’ the owner says. ‘As soon as we saw it, it felt right and after decorating it in our style it’s immediately felt like home, which I’ve never really felt like that about anywhere I’ve lived before.’