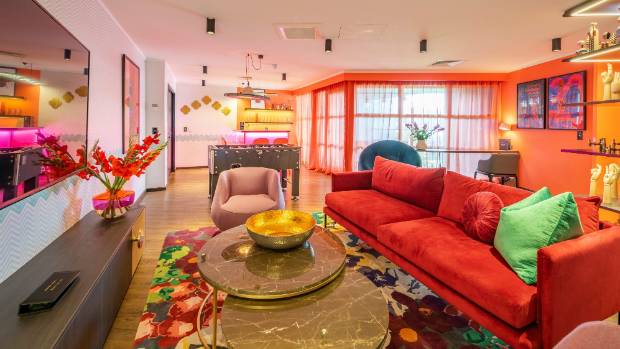 A homage to day-glo and hedonistic fun, the Ziggy suite has a neon-lit bar and foosball table.

There’s no beige on beige in this unexpectedly decadent suite at Auckland’s newest airport hotel.

This outpost was the first international opening for the Singapore-based hotel group. There are plans for more hotels throughout Australasia. There are no beige walls or bland drapes to be found at this hotel, which has statement-making decor at every turn.

Inspired by the colour and texture of the plumage of a tui, Auckland-based interior design studio Material Creative have created a welcoming vibe in the lobby with jewel tones and gold accents, sheepskin-strewn chairs, cosy nooks and original art work.

It sets the tone for a lobby that you actually want to hang out and have a drink in. That’s rare for an airport hotel, or any hotel for that matter. The bedroom furnishings in the Ziggy suite are inspired by Italian fashion house Missoni.

At 65sqm, the Ziggy suite is bigger than many apartments, and has a lounge, bedroom, private bar, deck and spacious bathroom.

The bathroom is enormous too, with a walk-in shower and giant black bath.

While the toilet is tucked away, the rest of it is open plan – excellent for visiting exhibitionists but frankly a bit cold for a suburban mum-of-two trying to enjoy a shower that isn’t filled with plastic toys for once. The bathroom is enormous but open-plan. Good for exhibitionists, a bit chilly for everyone else.

The suite is comfortable for a relaxing night of Netflix and room service but would really come into its own hosting a raucous late night party.

Not that we’re inciting any TV-throwing of course, but it seemed a shame that the only thing served over the bar was a mineral water and a peppermint tea when we stayed. The Ziggy suite has it’s own bar and complimentary snacks.

Kirkbride road isn’t a hot spot for sightseeing, but rather a handy location from which to catch an early flight.

Nearby Ambury Farm Park, Butterfly Creek or Rocket Ropes are good spots for families with kids to kill a few hours. Villa Maria vineyard is also nearby, which hosts regular outdoor concerts.

Travellers wanting to blow off some steam can head off for a run along the scenic Watercare Coastal Walkway – take a GPS tracker from reception so you don’t get lost. There are lots of cozy nooks around the lobby that appeal for a drink or two.

It’s the small touches that set this place apart.

There’s free parking, free mini bar and a free shuttle bus to the airport if you’ve booked directly through the hotel; fresh-baked donuts and a library of design books to peruse if you’ve stumped up for the Ziggy.

If you’re staying in a Habitat or Oasis room you can also bring a small cat or dog. Paksa restaurant was passable for an airport hotel, but didn’t stack up compared to the city’s best.

While not terrible, the service and food at Paksa had an amateurish feel when we visited.

With Auckland’s twinkling lights and amazing restaurant scene just 17km away, it’d be a shame for this to be someone’s sole experience of the city’s cuisine.

If you’re going to endure the frustration of a cancelled flight, like the 100 poor souls who trooped in halfway through our dinner, a night at Naumi is going to be miles better than dossing on the floor of the airport or being bussed to a grim motel.

It’s also a good option if you’ve got a tricky connection, an event with lots of out-of-towners or if you’re attending a concert at Villa Maria and need a bed to crash in close by.

But if you’ve got a couple of nights to spare and want a taste of Auckland’s best, suck up the taxi fare and head 25 minutes into the city.

The Ziggy is an impressive room but at almost $2000 a night, it should be.

Naumi has several types of rooms, ranging from the Habitat with twin queen beds, $199, to the women-focussed Blush rooms with GHDs and yoga mats, $235.

Suites are significantly more with the 55sqm Dottie $1499, and the Ziggy, which we stayed in, $1999. Don’t expect your airline to fork out for either of those if they’re putting you up.

Naumi is 3km from the terminal and 17km from the CBD. There’s a free shuttle bus to the airport if you book in advance, otherwise it’s on The Yellow Bus route which costs $6 per person each way.

The writer was a guest of Naumi hotels.