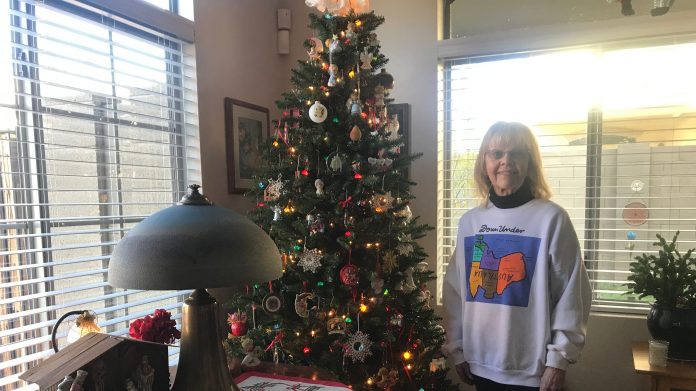 Cathy Matlock, a homeowner in The Pinnacle at Desert Peak condominium complex, poses with her Christmas tree on Dec. 22, 2018.(Photo: Bayan Wang/The Republic)

‘Twas the night before Christmas, when all through the neighborhood, not a single light was shining, not even a twinkle.

Residents of a north Phoenix condominium complex are crying “Humbug!” after the homeowner association banned outside holiday decorations, including lights, and threatened to fine violators.

The Pinnacle at Desert Peak Condominium Association notified homeowners months ago that they would not be allowed to decorate the exterior of their homes this year because of construction.

That has left a patch of holiday darkness at the complex north of Loop 101 near Cave Creek Road.

Some homeowners on Saturday called the decision stupid and said the HOA could have done better planning.

“It’s Christmas and we have children … they were upset about it,” Sandy Francis said. “It’s something they look forward to every year and something that is a tradition in our life.”

Francis, who is visiting her family at The Pinnacle, said the children have been asking why they aren’t allowed to put up Christmas lights like families in other neighborhoods.

“Maybe they (HOA) should have delayed this till after the holidays so everyone can celebrate,” Francis said.

The HOA sent notices out in October advising that decorations would not be allowed for up to a year while crews apply new stucco and paint to all 128 buildings. That means the residents might not be allowed to decorate until Halloween.

Those who scoffed at the rule and insisted on erecting yuletide displays faced $100 fines for starters. The penalties would increase every 10 days until the decorations come down, according to the notice.

The association’s board of directors could not be reached for comment on Saturday. Construction crews, however, were working on several buildings throughout the community.

The notice, which residents shared with The Arizona Republic, said the association considered several alternatives, but none that could ensure construction would not be impeded.

“Priority must be on completing the project and making the community look as good as it can be,” the notice stated.

The notice ends with a salutation wishing residents a happy holiday season: “We wish you all a happy Halloween, Thanksgiving, Christmas, Hanukkah and New Year.”

Residents of The Pinnacle at Desert Peak condominium complex were told by the HOA not to put up Christmas decorations while the property has ongoing construction projects. (Photo: Bayan Wang/The Republic)

State Rep. Kelly Townsend, R-Mesa, said in a Friday Facebook post that she was sad and disappointed by the association’s decision.

“I have grown tired of hearing so many stories of over-reaching and overzealous neighbors in planned communities,” Townsend said in the post. “There are definite advantages to living in an HOA, but this example is the reason I have a hard time supporting these types of practices.”

Townsend said the association declined to accept easily removable tape and light strips. She said the HOA “elected to prevent homeowners from expressing their faith and tradition at Christmas time this year.”

Resident Cathy Matlock said she won’t let the HOA limit her Christmas festivities — at least not inside.

“I have candles in the windows, I have a tree,” she said. “We still have wreaths.”

In Matlock’s living room, a Christmas tree topped with a glowing angel nearly met the ceiling. Displayed on a table next to the tree was a decorated Nativity scene.

Some residents said the work on their homes was finished, but the association would still not let them decorate.

Others appeared determined to make a small holiday stand by hanging wreaths from their front doors and decorating their balconies with red ribbon and giant bows.

One even had jingling bells.