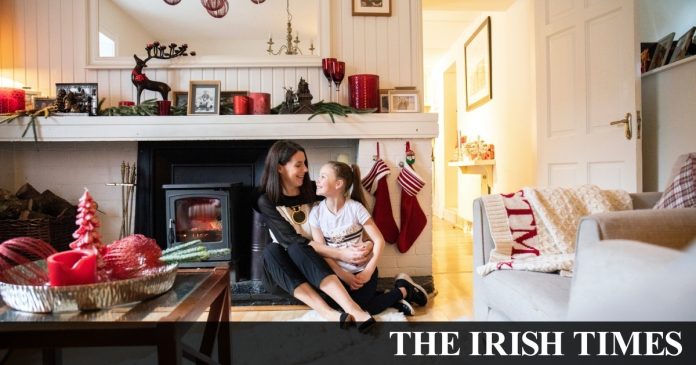 “I honestly think Christmas was invented to get us through the awful winters,” says Helen Coughlan, retail director of Irish homeware chain Meadows & Byrne, who, despite spending 11 months of the year working with a focus on Christmas, still pulls out all the stops for the festive season in her own home.

Coughlan, who hails from Blarney in Co Cork, has been with Meadows & Byrne (M&B) since its inception in 1994 and, under the wing of CEO, Freda Hayes, worked her way up from shelf-stacker to area manager, then head buyer, and retail director. Hayes describes her as the “head and the tail of daily operations of the 13 stores”.

When not running the show, Coughlan is mum to Louis (9) and Ava May (4) and she and her husband, Trevor, are celebrating their first Christmas in a 150-year-old, sprawling cottage they bought in January in Glanmire, Co Cork. The festive decorating began on December 1st, and Coughlan, a veritable Mrs Claus, has not held back.

Each room has a distinctly different theme. The sage green dining room is the backdrop for a symphony of champagne hues, mistletoe branches and seasonal greenery running along the table and tumbling off shelves. Although the leafy arrangements look freshly foraged, Coughlan is quick to point out, “it’s all faux, sure otherwise they would never last the month”. She’s also added lots of festive table accessories – a long, slim centrepiece is a must and Christmas cushions adorn the banquette bench the carpenter has just installed, which she adds was the best design decision she made. “That room is small and narrow and having bench seating allows loads of people to squash in around the table, and the lids lift to provide loads of hidden storage, too.”

The family room, Coughlan says, looks like “Santa’s grotto without the Santa, ” but, she adds, is “hopefully a sophisticated grotto”. The tree is brimming with toy soldiers, nutcracker-esque decorations and electric-green baubles. The traditional red and green Christmas decoration colours, Coughlan says are out of fashion, “as everyone is buying creams, greys and neutral festive accessories now, which coincides with the current interiors trends for a more muted palette. Some customers go the other way and do pops of hot pink and turquoise to lift the greys but I still love the classic combination of red and green and toy-like ornaments.

“The kids love it most of all, and isn’t that what it’s all about? I distinctly remember as a child, this shiny cone, which had a Santa’s head stuck to it. He had long white scraggly hair that was well-past its L’Oréal days, but he was the king of the tree and the epitome of Christmas in our house,” says Coughlan.

The living room, nicknamed the Brandy room – “brandy by colour, rather than by supply” quips Coughlan – gives a more subdued nod to Christmas. “I’ve gone for really rich shades of gold, copper and pearl tree decorations and added lots of trimmings in the same tones, which all tie in with my favourite decoration of all – a dark bronze reindeer ornament that takes pride of place on the mantelpiece. He was the first decoration I ever purchased, for my first house, which I bought at 26. I bought him in M&B of course, and as you can see, I’ve been building on the collection ever since. I always add in a few new bits that I buy for the store every year and edit out some of the old. Trevor thinks I’m nuts bringing home more Christmas stuff, but there’s always room for one more decoration.”

While the entrance way is scented with cinnamon candles, festooned with fairy lights, garlands and a traditional crib setting, the kitchen is the least embellished room of the house, by Coughlan’s standards at least. “The’s too much cooking going on in there and it’s too small for much decoration, but I make sure there’s a pot of mulled wine brewing on the stove from the 23rd to the 26th, mostly for the magic aroma it creates as opposed to drinking it. Then, of course, I’ve all the festive tea towels, oven gloves and aprons out for action. If you’re going to play the part you may as well look the part,” says Coughlan, who is only having her immediate family for Christmas dinner this year. “But I’ll be besieged by family and friends knocking over during the week for drinks, mince pies and the usual catch ups,” says Coughlan.

Although sales of Christmas stock now account for over 30 per cent of M&B’s annual turnover, Coughlan is insistent the Irish are not simply following in the footsteps of the Americans, buying copious amounts of Christmas decorations and creating ever-more exuberant schemes.

“I think it’s two-fold: decorations are way more accessible now – when we were kids all you could buy was tinsel and a string or two of lights, anything else was out of reach or only available if a relative brought them home from the US, so our parents’ options were limited. Now there are so much decorating possibilities for sale and we’re just getting more creative. Instagram and Pinterest are upping the bar too and providing lots of inspiration and showing us fun ways to tablescape and ideas for dressing the house too, so that’s definitely feeding our appetite.

“But ultimately, I think we’re just trying to make magical memories for our families that will last a lifetime. When I think of my childhood Christmases, which were wonderful times, it’s the little things that stand out – the good, cork-based table mats, that only saw the light of day once a year, with their red robin motif. Chains of handmade snowflakes draped all around the house, the smell of cloves and turf, the crib and of course our dishevelled Santa on top of the tree. I’m just trying to recreate a new version of that magic for my family, and if people think that’s over the top or too American, so be it.”

All decorations photographed are from Meadows & Byrne stock, both current and past accumulated between 1996 and 2018