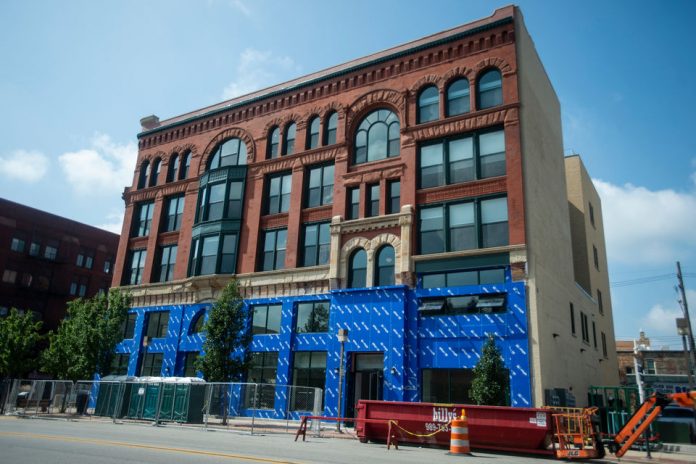 BAY CITY, MI — The doors to a historic building in downtown Bay City are open again after a nearly three year redevelopment project transformed the building into a multi-use structure with restaurant, commercial and residential space.

The 128-year-old building, formerly known as the Crapo building and now called The Legacy, has a new purpose and new look. But remnants of the former bank building remain, giving the structure character and preserving its history.

Anchored at the northwest corner of Center and Washington avenues, the building now houses couples and singles who have signed lease agreements that fill up 20 of the 26 units. The residential space offers 17 one-bedroom units and nine two-bedroom units on the second through fifth floors. Two of the units are ADA accessible. The rental units are priced between $1,000-$1,750 per month.

Black and white historic photos of Bay City’s past decorate the walls that encompass the residential space. The metal prints produced by Avram Golden Photography in Bay City showcase old landmarks and businesses such as the Orpehum, Johnston’s Restaurant and the Third Street Bridge.

Some renters have moved into their new homes that feature hardwood floors, open-concepts, modern amenities and large windows — some as tall as 9-feet — that allow for natural light to flood through.

A two-bedroom unit staged by happy. pretty. – a lifestyle design company based in Midland – gives inspiration to how a renter can make their new place their own, with Parisian decor.

A few highlights of the units include walk-in closets, stainless steel appliances, granite counter tops and a stacked washer and dryer.

Acosta described the theme of the residential space as classic, timeless and versatile enough to bring in any type of furniture or decor.

The main floor will house a restaurant and commercial office space. Acosta will make one of the spaces her office, while the other commercial space, about 3,00-square-feet, is available. The large space was the former home to bank’s commercial loan department.

A restaurant hasn’t been nailed down yet, but Acosta said there are a few prospects that she’s considering.

The main level is still under construction, which is being led by Spence Brothers Construction based in Saginaw.

The redevelopment will feature fixtures from when the building operated as a bank. An old bank vault on the main floor, for instance, will be incorporated somehow into the decor of the new restaurant. A birth certificate for a Cabbage Patch doll was found in one of the safety deposit boxes in the walk-in vault.

Another vault will be restored and used as decor in Acosta’s office.

The plan to revive and redevelop the building started when officials with Chemical Bank were considering demolishing the structure. Chemical Bank employees moved out the location in 2014 and into the Uptown Bay City development after being housed in the Crapo building for 27 years.

“I’m from Bay City. I didn’t want a drive-through bank in this location,” Acosta said.

After taking care of some details like a business plan and getting tax breaks, Acosta moved forward with her vision that would give the Crapo building a new life.

One of her first tasks was the removal of the building’s 1960s-era metal facade that hid its original Romanesque revival style.

Original doors and hardware, such as copper light fixtures, are some of the smaller details that went into highlighting the building’s history.

Several of the doors to units showcase the names of former lawyers, such as James W. Baker and B.J. Tally. Other doors have gold-restored letter deposit slot.