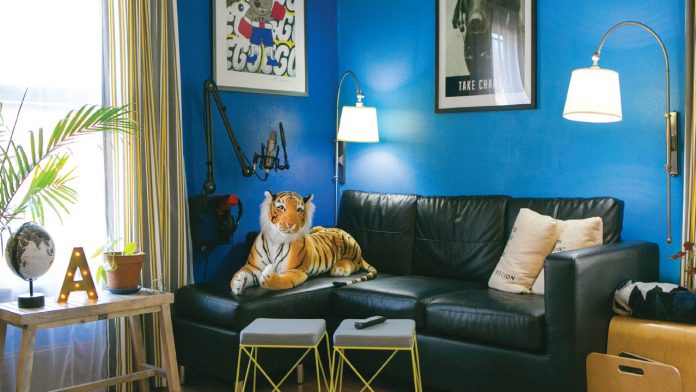 If you’re familiar with the colorful, eclectic style of Art Gecko — a Madison home décor and specialty gift shop with locations on Monroe Street and State Street — you’ll know what to expect upon entering Steven Knurr’s house.

“I basically have just backed a truck up to Art Gecko,” says Knurr, 34, a homeowner since 2008.
But at his East Johnson Street abode, he turns Art Gecko into “Art Techo.” The technology- and gadget-loving Madisonian has interconnected an astounding number of electronics, devices and appliances in his home to make life easier. His house is a well-decorated WiFi palace.

Forty WiFi-connected lightbulbs, all in varying neon colors and many underneath the shades of colorful fabric lamps, can be found on all four levels of the house. He can turn on any of them with a single voice command to Alexa, Amazon’s cloud-based voice service device. Knurr has at least six computers. An iPad mini mounted to the left of the stovetop is an easy way to call up a recipe. Two 3D printers often buzz through the night to complete hours-long printouts. In a greenhouse in the backyard, grow lights and temperature-controlled self-watering planters (which Knurr modified to connect to the internet) help him with his budding green thumb — he grew nearly 500 peppers last year.

And that’s just the tip of the technological iceberg.

“I probably own more extension cords than any other human in the state of Wisconsin,” he says.
One reason Knurr has outfitted his house this way is because he works from home. Knurr, an Epic Systems Corp. ex-pat and current creative and marketing director at Avaap, a global consulting firm, often hosts co-working days and out-of-town clients and co-workers. Multiple wireless access points are scattered throughout the house to ensure all electronics stay connected. It’s on par with the wireless system you’d see in a small business. He has a professional conference room on the second floor, complete with a boardroom table, a speakerphone system attached to his computer, a whiteboard and Google Chromecast so people can share their screens with a group. “This wasn’t a space I realized I needed, but once it was there, it was like, ‘wow.’ This room has been surprisingly useful.”

His personal computer station — which is in his finished attic/bedroom/personal studio for 3D printing, photography and design work — includes four monitors and a laptop. Each screen has a purpose, he says — development, archive, research, communication, execution. “I don’t know how people work with just one screen,” he says.

Technology has helped Knurr navigate the world, “kind of like Google Maps helps you navigate a physical topography,” he says. A constant learner, Knurr uses his devices to better communicate visually as part of his job. “The future is both three dimensions and moving,” he says.

But Knurr’s techie tendencies aren’t just an effort to create a dream at-home office. The technology in his house supplements his varied interests as well as an affinity for building and tinkering.

An avid cyclist, Knurr has a basement workout room that includes a squat rack, a space for yoga, a balance bar and a stationary bike rigged up to an iPhone, a computer monitor and an Apple TV used to connect to an Xbox and Zwift, a stationary bicycle training game. Another virtual training app shows his heart rate, power output and cadence while pedaling. That’s not the best part, though — Knurr has connected a little weather station device (that monitors carbon dioxide levels) to the colored lightbulbs in the room, so when Knurr is pedaling hard and breathing heavily, the lights change from yellow to orange to red. “It’s a fun little motivator,” he says.

Knurr also dabbles in audio recording. The arms of three industry-standard studio microphones reach out from the corners of a second-floor room where Knurr has dabbled in podcasting and held jam sessions with his friends. The mics connect to a MacBook Pro in the room running an audio recording app. If that doesn’t make the room cool enough, helping the case are bright blue walls dressed with framed graphic prints and photographs, as well as a stuffed tiger perched on a black leather couch.

And you can say Knurr is more than an amateur 3D printer as the owner and operator of two printers sitting side-by-side in his attic bedroom. (Knurr even worked with Madison Magazine to create the 2017 M List awards — his first professional 3D printing project.) He says he has more projects in the works, but he also uses the printers to create useful at-home objects and to decorate his house with printed lampshades.

Yet not every aspect of the house is tech-driven. A huge fan of Johnson Public House (right down the road from him), Knurr has a coffee nook in the dining room stocked with JPH’s Kin Kin beans. His mudroom off the kitchen is a mini bike shop, which quickly leads out to a short bike garage Knurr retrofitted with diagonally moving bike racks. Sanskrit-printed drapes that evoke a yoga studio vibe in the living room brush against a leather couch lined with graphic pillows — some cheeky, some Madison-related. Many of the walls in his house are occupied by framed photographs, many of which Knurr took himself.

And — probably the most non-techie thing in Knurr’s house — is Rapha, his energetic flat-coated Aussie shepherd mix rescue dog.

While Knurr has found a way to harness technology to make so many things convenient in his house, he still hasn’t found a way to keep Rapha from hopping over the backyard fence to chase a squirrel.

Not even Alexa can help with that.