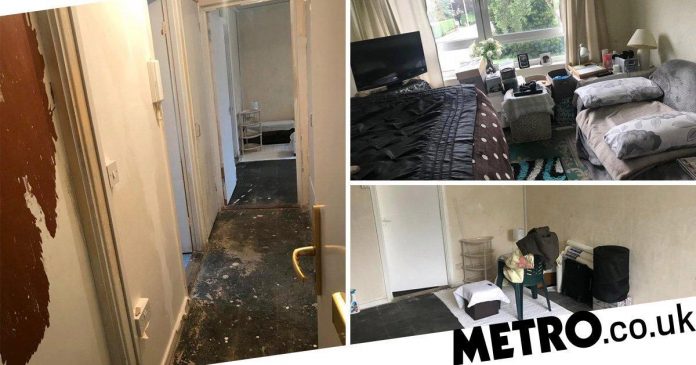 A disabled stroke victim has been forced to sleep on an airbed in his sister’s living room because the flat he pays rent on is ‘unlivable’.

Tony Clarke, 75, moved back to the UK seven years ago from the US after suffering a number of strokes, which caused him partial paralysis and a loss of speech.

He was told he would need to wait at least a year for a flat, but was only offered a suitable property close to where his sister and full time carer Sandra Clarke lives in March.

Despite paying £300 a month on the rent since then, Sandra said he has not been able to move in permanently because the flat is in such poor condition.

Tony signed the tenancy agreement with Leicester City Council for the flat, but Sandra said despite her complaints, nothing has been done.

She said: ‘It’s not the wait that I’m upset about, it’s the state the property has been given to us in.

‘There was a hole in the floor, the windows were and are still leaking and the door handle didn’t work on the bedroom door.

‘It was lucky we noticed it, Tony can’t speak, if he’d have got trapped in there he’d have no way of raising the alarm.

‘When I called the council to tell them they told me to fix it myself. I couldn’t believe it. I’m a pensioner caring for a disabled pensioner, I’m not sure how they expect me to do that.

‘My own house is mouldy and damp ridden but I want to get Tony sorted first.’

Sandra said decorators and carpet fitters won’t work in the flat because they say it is not in a good enough condition.

She added: ‘He’s been sleeping in my front room since he had the strokes. It’s no way for either of us to live. I’ve got boxes stacked up everywhere, piles of clothes.

‘Even council staff can’t believe it when they come here. Some have even taken photos and said they will come back to me and then I never hear anything.

‘I don’t know where to turn, I feel invisible.

‘I’m fed up of being ignored. I’m not asking for anything more than a safe and suitable place to live.’

A city council spokesman said they do not have any evidence the flat needs anything other than decorating and flooring done.

They added the partially adapted property was ‘classed as suitable for him by an occupational therapist.’

The spokesperson then added: ‘However, last week we agreed to carry out a further inspection of the flat and have made an appointment, agreed with Mrs Clarke, to visit on Monday.’