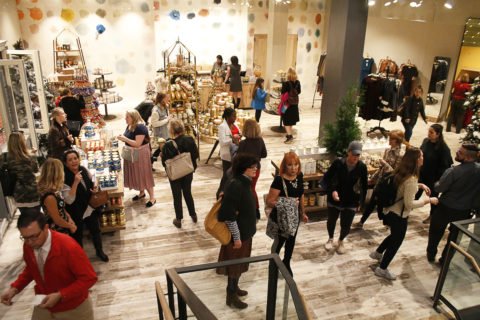 Passersby were entranced as the sun set and the clothing and accessory store’s outdoor lights began to glow, but only those who had been invited and reserved a spot for the celebration were allowed inside the former home of Barnes & Noble at the corner of Woodmont and Bethesda avenues. And those who were allowed in likely weren’t disappointed.

Accentuated with soft colors and contemporary art, Bethesda’s Anthropologie is designed to be one-of-a-kind, inspired by “modern Scandinavian aesthetic.” The mood in the 37,500-square-foot store, decorated for the winter holidays, was cheerful and bright Thursday night, despite dim lighting to invoke a calmer, “airy” feeling, a company spokesperson said.

Just inside the main entrance of the three-level store, attendees were greeted with the store’s apparel selection, spanning much of the first level. Also on the first floor is Terrain, a garden center bursting with small plants and trees, and Terrain Cafe, a full-service restaurant that uses local produce, meat and dairy for its farm-to-table menu.

Singers performed live, serenading the crowd of more than 100 as they browsed, while wine and finger foods prepared by Terrain Cafe staff were served throughout the night.

On the basement level was more apparel and Anthropologie’s accessory selection, ranging from jewelry to bags and shoes. The third floor houses several sections of home goods, including bedroom decor, dining and kitchen sets, rugs, wall art and more.

Barnes & Noble, which occupied the building on Bethesda Row for 21 years, closed in January when the company failed to negotiate a lease agreement with the landlord, Federal Realty Investment Trust.