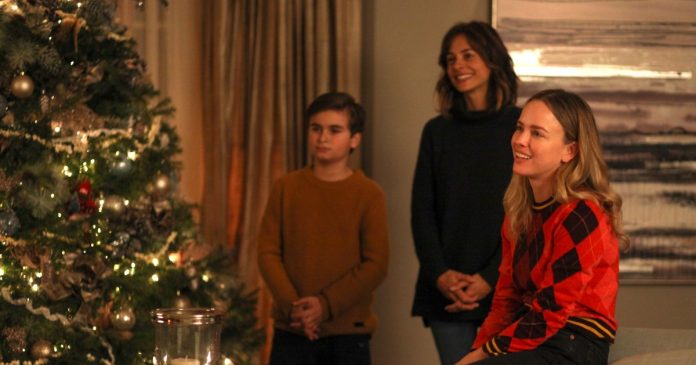 It’s Christmas in the land of A Million Little Things so that means there’s tree shopping, decorating and a million new little (but not really little at all) problems to deal with. Let’s get right into it, shall we?

We open on Rome waking up to find Gina creepily watching him sleep. She had a dream that he was having an affair and is mad but also turned on? She tries to start fooling around with him, but Rome makes excuses and gets out of bed. I’m assuming his anti-depressants are messing with his sex drive. Gina promises to have her way with him later, so we’ll find out soon enough.

Over at Katherine’s place, she and Theo are sewing his Superman costume together. Not sure the relevance of that costume at this time of year, but whatever. Theo accuses Katherine of being Santa Claus and she has half a second to look sad over the loss of her son’s innocence before Eddie shows up early to take Theo tree shopping. Classic, Eddie.

Gary arrives at the Dixons’ house trying really hard to be in a good mood after last week’s outburst. He’s wearing an ugly holiday sweater and Delilah wants to take a pic, but pregnancy brain is making her forgetful and she can’t remember where she left her phone. Gary thinks she needs to tell the kids about the baby soon, but she doesn’t want to do it at Christmas. So they head off and meet up with the rest of the gang to pick out a tree and, of course, D slips on some ice, prompting everyone who’s aware she’s pregnant to freak out while her kids grow confused and curious.

The gang gets to decorating and Sophie finds Jon’s Santa suit because of course, Jon dressed up as Santa every year. Upset, she walks out and Eddie goes after her to try to talk about it. He goes for the “talk about my own sadness about missing Christmas with my son because I’m going on tour” tactic to try and get Soph to open up, but she sees through it and they decide to play some music together instead.

Gary’s trying really hard to enjoy the festivities, but he flashes back to Jon putting the angel on top of the tree a previous year and walks out to go have a sad moment in Jon’s office…where Ashley just happens to be having a hushed convo with someone named Donnie about not “doing this to the Dixons at Christmas.” Gary doesn’t take much notice of her call and instead wants to know why Jon killed himself. Now it’s Ashley’s turn to flashback and we see her witness Jon on a tense call, yelling at someone about “having the votes.” In the present, Ash asks Gary if it would make it easier for him if he knew why Jon killed himself. Gary thinks it would, but instead of sharing any of the many details she seems to know, Ashley just tells him to suck it up and make sure the Dixons have a good Christmas. She then leaves to go talk to that Donnie chap she was on the phone with earlier.

Under the pretense of getting more decorations, Gina lures Rome to the garage and tries to resume their bedroom antics from that morning. Rome pulls away and has to come clean about his lack of sex drive. She’s clearly upset, but he assures her it’s not her. He’s not sure if it’s the pills or because he’s not feeling like himself. You see, he feels emasculated by the fact she’s taking care of him not the other way round. Eye roll.

Back inside, Maggie arrives and after an awkward moment ignoring some mistletoe near Gary, Delilah sends her and her ex off to buy more lights together in Gary’s new car. Let’s rename her Subtle-D. Though she’s had her first round of treatment, Maggie’s not telling anyone about her chemo until she sees how she responds so as not to give anyone false hope. On the way to buy lights, she and Gary ride in strained silence, but once they get there they break the ice with mutual outrage at the couple in front of them in line who employed some sneaky spot-saving tactics. Gary and Maggie drop the cancer bomb when the lady in front of them makes an excuse about feeling under the weather. Unsurprisingly, the cancer card wins and they get to move ahead. After all that cancer bonding, they’re much friendlier in the car on the way back — Maggie even feeds Gary brittle. He then asks her if they can be friends. Maggie thinks they can, but then she finds a woman’s scarf in his car. Gary makes a joke about sleeping with his elderly neighbor and Maggie puts on the scarf so that someone can recognize it as Ashley’s later. (Recap continues on page 2.)