Home Bathroom Woman, 19, describes heartbreaking moment she discovered the man she thought of... 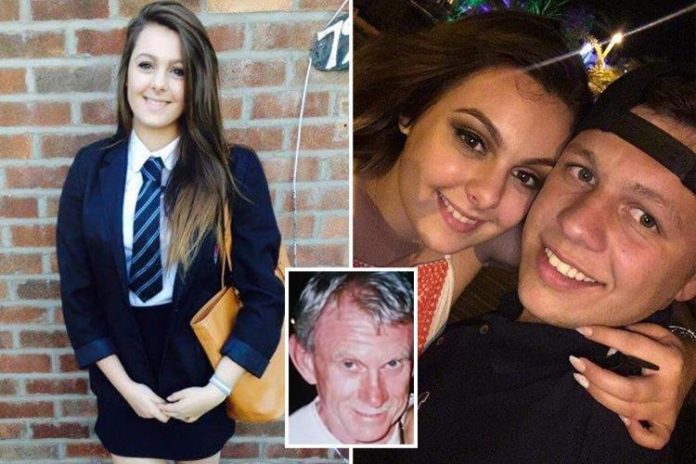 FOR 19-year-old Emily Kempster, pensioner Alan Griffiths was a beloved granddad figure who fixed her bike, bought her Christmas and birthday presents and gave her cuddles on the couch while watching TV.

But one evening, while she was running a bath, she made a sickening discovery.

Griffiths, 71, had taped a secret camera to the base of the toilet in her bathroom using masking tape, so he could spy on her during her most intimate moments.

Emily went to the police, and Griffiths was handed a suspended sentence after admitting voyeurism and possession of indecent photos of children.

She said: “I feel now like I was being groomed for years and years – like our whole relationship with him was a total lie.

“I am anxious and jumpy, even in my own bathroom.

“Alan was like a granddad figure to me. I loved him. He would take us to school, decorate our rooms and do odd jobs around our home.

“He came for Sunday lunch, and we’d exchange Christmas and birthday presents.

“I was so close to him. Our whole family was. We were sick with shock when we found out.”

Emily and her mum, Sarah, and older brother, Alex, 25, met Griffiths nine years ago and they saw him daily.

“His house was at the back of ours so he was literally round the corner,” Emily explained.

“His wife was ill and so we’d go every day to keep her company. When she went into hospital Alan was lonely, so he would have lunch with us. My mum helped look after her and did their shopping and errands.”

She told how Griffiths was a good handyman and was always doing odd jobs for them, fixing their bikes and helping with decorating and plumbing.

“He was a very tactile man,” she added.

“He’d always give me a kiss goodbye and he would have his arm around me or mum when we were watching TV.

“He wasn’t at all affectionate towards my brother but at the time, we didn’t read anything into it.”

When Emily was 13, Alan offered to buy her a One Direction jumper for her birthday.

She recalled: “Alan said he needed to make sure he got the right size, so he asked me my bra size.

“I was really freaked out and I told my mum. She confronted him, but he said his words had come out wrong and he hadn’t meant to offend me.

“Mum said I must have misunderstood him. I didn’t want to think bad of him. He was a lovely, kind bloke and he did so much for us. I forgot about it.”

Griffiths would even drop Emily and her brother at school and at weekends he’d take her to the local garden centre.

“He took me to buy paint for my room and then decorated it for me,” she said.

“Even as I got older, if I missed my bus for college, I knew he’d drop me off. Our toilet broke once and he was round with his plumber’s tools.

“It worked both ways too; we always made such a fuss of him.”

Last year Emily, who works in retail, met a new boyfriend, Daniel Slater-Mairs, 19, and began to see less of Alan. But last October, Alan took her to get her nails done and then treated her to a Costa coffee.

She said: “Afterwards, Alan dropped me off and said, ‘Do you mind if I use your loo?’

“It was such an odd thing for him to say; he had never asked if he could use the loo before. He was being so formal. But I thought nothing of it.”

The following morning, Emily ran herself a bath and Alan called round.

“He dashed up to the bathroom, saying he needed the loo, which again was odd, since he lived just around the corner,” she recalled.

“He offered to take me to work and arranged to call back in an hour.”

After Alan had gone home, Emily went for her bath – and noticed a small camera, taped to the wall, next to the toilet.

“I pulled it off the wall and examined it,” she said.

“It was one of those expensive, high-tech go-pro cameras. There was a faint red light flashing, hidden behind black masking tape. I knew, instantly, it didn’t belong to us.

“As I picked it up, I saw my own legs through the lens. I realised, in horror, that I was being recorded.

“I checked the history, and there was earlier footage of Alan filming his own legs, obviously trying to work out how to use the camera.

“I felt nauseous and light-headed. I could hardly believe what I was seeing.”

“I explained to them what I had found and, as I said the words out loud, it suddenly hit me what was happening,” she said.

“I felt so sick inside. He was supposed to be my granddad.

“Then, I realised Alan was due round any minute – on the pretext of taking me to work but obviously to collect his camera.

“He replied instantly, ‘I am so sorry, I don’t know what I was thinking.’

“I was terrified, I ran around the house, locking all the doors, then I hid behind the curtains.

“A few minutes later I heard the sound of a car on our driveway and it was Alan, parked outside. I was hysterical.”

Colin and Leanne arrived minutes later and managed to block Alan in the driveway before calling the police.

Alan confessed and appeared before Liverpool Crown Court in March this year, where he pleaded guilty to one count of voyeurism and three counts of possessing indecent photographs of children on his laptop.

The pensioner was handed a 15-month suspended sentence in addition to 120 hours unpaid work, and a rehabilitation activity.

A restraining order remains in place and Griffiths will be registered on the sex offenders list for 10 years.

Judge Flewitt QC, said: “She is a young lady who you know, she looked up to you and she trusted you.

“You have shattered that girl’s confidence and set her back for some time. But I can see that you regret your actions.”

Emily said: “I feel very disappointed with the sentence. I have a re-occurring nightmare of Alan sitting in the house and laughing at me. I do not feel safe at home and I feel like I am always being watched.

“I feel really anxious around older men. I think the courts ought to have been harsher with him – at the very least, he ought to have gone to prison.”

ONE FOR THE ROAD

Are you worried you’re an alcoholic? Take this quiz to find out

Pubic hair on or off? Mum sparks furious debate about the ‘right’ style down there

WED YOU BELIEVE IT?

Do you get up to pee in the night? It’s a sign of these killer diseases

August 22: Swapping a no for a yes in romance happens faster than you think

We previously told how a sick grandad insisted he only viewed thousands of child abuse images to cure his erectile dysfunction.

We also reported how a paedo “grandad” who began abusing a girl from the age of 10 tried to buy her off with a fiver when she finally refused to visit him.

Love real life stories? We’re always on the lookout for case studies to feature on Fabulous Online. Join our Facebook group and you could make money by telling your story.