NEW DELHI: The reflection of the moon in the tree-lined canal, built by Mughal emperor Shah Jahan’s daughter Jahanara, is believed to have given Chandni Chowk its name. The evocative 17th century name could, however, puzzle future generations. The latest redevelopment of the area is obliterating all hints of the water body that ran the length of the busy market. In its path will be a wide central verge that will hold utility ducts, transformers, sub-stations, police stands, even toilet blocks. Not surprisingly, historians, conservationists and heritage lovers are up in arms and anxious about what this will do to Chandni Chowk’s historic fabric. 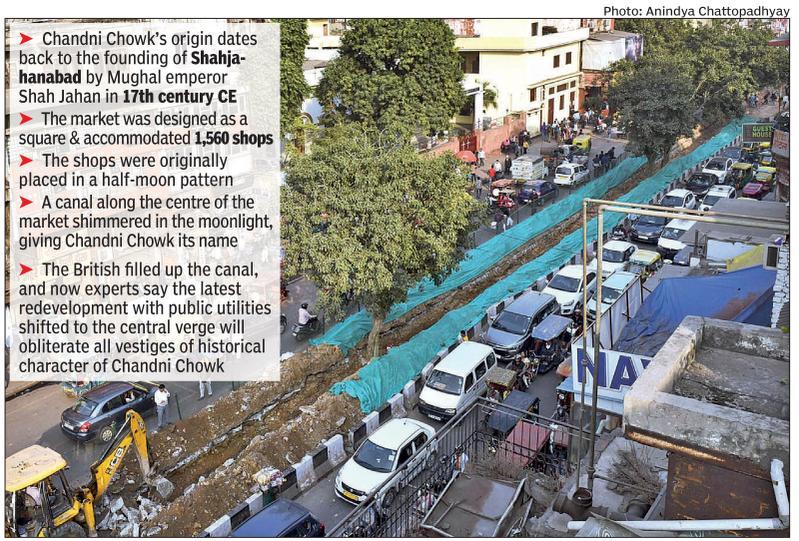 On December 1, bulldozers and excavators moved in to implement the redesign of the esplanade. The plan is to pedestrianise the 1.5-km esplanade from Red Fort to Fatehpuri Masjid and have wide walkways of either side of the central verge. A dismayed Navin Piplani, conservation architect and principal director of Intach Heritage Academy, said, “The existing median is being destroyed to lay underground utility cables. Archival images of Chandni Chowk show a canal running past where the central verge currently lies. This is what Chandni Chowk is. It is a ceremonial path from Red Fort to Fatehpuri Masjid and should not be altered or destroyed.’’

Architect Pradeep Sachdeva, the man behind the redevelopment design, argued that space constraints necessitated the moving of utilities and toilets to the central verge. “We presented a number of alternatives to UTTIPEC. We need to prioritise today’s needs and so the idea is to maximise pedestrian areas. The transformers and toilet blocks would have blocked entries to shops and proved a nuisance to pedestrians.” UTTIPEC clears all projects related to transportation and transport engineering in the city.

If it is any consolation to the historically inclined, Sachdeva said the redevelopment will pay a tribute to the long-gone canal through a symbolic pattern and landscaping. “By not allowing utilities on the footpath, the plan designers have been able to provide two rows of trees along the length of Chandni Chowk,” he added.

Most heritage experts agree that this plan is “destroying” Chandni Chowk. “Why weren’t heritage conservationists and experts involved in planning the revamp?” asked historian Sohail Hashmi. “Inputs from experts were required, not bureaucrats and engineers sitting in a closed meeting.” Urban planner AGK Menon added, “The stream passing through Chandni Chowk cannot be recreated, but it is our job to preserve what is left of the legacy of Chandni Chowk.”

Swapna Liddle, Delhi convenor of INTACH, said that redevelopment plans needed to balance today’s needs while preserving yesterday’s stories. “Though the canal ceased to exist after the 1857 uprising, it still is integral to the history of the stretch,” she reiterated. “Many would want to see the original footprints of Chandni Chowk.”

And while Alka Lamba, MLA of Chandni Chowk and director of Shahjahanabad Redevelopment Corporation, like Sachdeva, argued that the focus should be on what is more importance today, K T Ravindran, urban designer and former chairman of Delhi Urban Arts Commission, countered, “When you think of Chandni Chowk, you think of the visual linkage with Red Fort and that should not be altered. Transformers can be modernised into small boxes so they needn’t be visually unappealing. You have to respect the past and think of modern innovations to meet future needs.”

The traders lining the avenue are themselves in two minds about the changes. Sanjay Bhargava, president of Chandni Chowk Sarvyapar Mandal, wondered at the prudence of having huge power transformers on the central verge. “The first redevelopment plan had earmarked a multi-utility zone for transformers and toilets on the northern carriageway. Such a zone has now been moved to the central verge,” Bhargava said. “But which shop owner will want transformers to be located in front of their shops? A Delhi Metro report had proposed moving the transformers underground, but apparently Delhi government rejected it because it was too costly.”