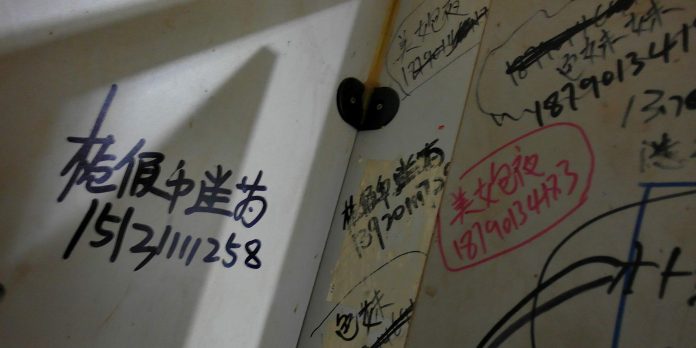 Bathroom graffiti may well be one of a few truly universal phenomena — especially among men — and China is certainly no exception. Yet while many dismiss these scrawls as vulgar and obscene, I believe they merit more serious attention. In particular, the pervasiveness of themes such as sex and male power provides interesting fodder for an analysis of social attitudes toward gender and sexuality.

In May 2012, an undergraduate student and I surveyed men’s and women’s restrooms at a university in the eastern province of Anhui. We found little graffiti in the women’s restrooms — mostly requests for exam stand-ins. In the men’s restrooms, on the other hand, a staggering 54 percent of the graffiti we identified was sexually explicit. 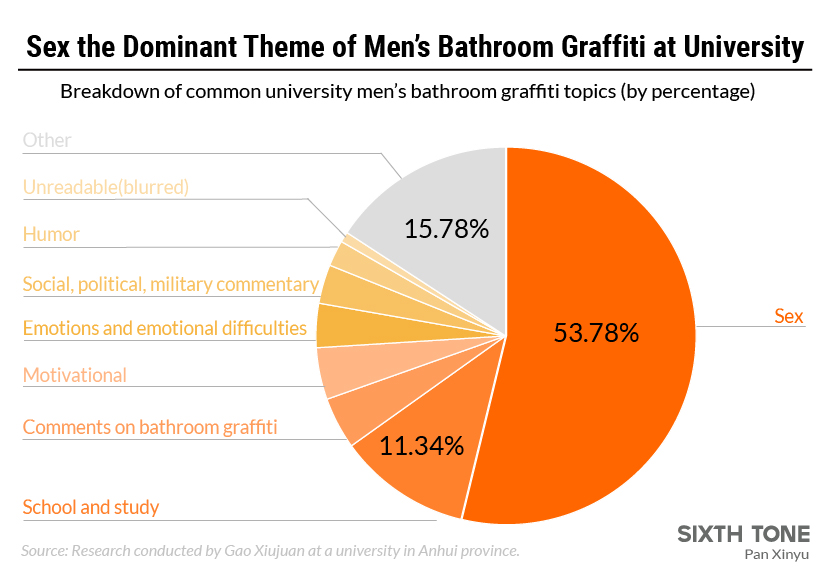 The men’s bathroom offers a unique platform for discussions about sex and sexuality. In much of China, sex remains a taboo subject, especially for students, but shared bathrooms — which straddle the line between private and public space — offer men both the anonymity and a venue for pure expressions of masculinity. The dormitories at the university we studied generally house four students to a room, making the bathroom the only truly private, unsupervised space to which young Chinese university students have access. And as one of the very few venues where such language is tolerated, public bathrooms provide young men a rare outlet for these so-called vulgar or dirty sexual urges and their negative or repressed emotions.

It should come as no surprise that the way gender is portrayed on bathroom stall walls tends toward extreme exaggeration and fantasy. Men are depicted as being driven by a powerful sex drive and as overflowing with sexual prowess, whereas female bodies exist solely for the purposes of conquest and domination.

Of the pieces of graffiti pertaining to female university students, every one — without exception — characterized them in an insulting or derogatory fashion. Women were generally portrayed in one of two ways: either as purely physical objects valued only for their beauty or sex appeal; or as vulgar, even petulant figures, concerned only with money and sex. Such depictions reflect a common archetype found in patriarchal societies — namely the femme fatale. As conceived by patriarchal societies, the femme fatale is simultaneously warm and alluring, as well as evil and lustful. In the Chinese context, one of the most well-known versions of this archetype is the seductive concubine who uses sex to lure men away from their responsibilities.

Traditional, patriarchal stereotypes such as these give young Chinese men the confidence to use the walls of public bathrooms to disparage their female classmates both publicly and anonymously — shaming them for sexual promiscuity or accusing them of moonlighting as prostitutes. Of course, the real issue for men is less that these women are having sex, and more that they aren’t having sex with them. As the Chinese saying goes, men expect “a housewife in the kitchen, a lady in the living room, and a prostitute in the bedroom” — and when women fail to meet that arbitrary standard, they become a target for mockery or slander.

Of course, not every young man is comfortable with such portrayals of women. Some of the works we found critiqued these expressions of masculinity and derided the men responsible for being “low-quality.” One piece read, “I thought college students were sophisticated; I didn’t expect them to be a bunch of sex fiends! What trash!” Others chose to focus their energies in a more positive direction, such as exhorting stall occupants to embrace life’s challenges. Yet even this may well be just another example of performative masculinity — albeit of a different strain.

As for the graffiti related to homosexuality, although it primarily involved a search for sexual partners, even within this subset dominance was prized. According to one piece, “conquering a man is a far greater achievement than conquering a woman.”

The gender politics of men’s restrooms are extreme, obscene, and far removed from the diverse expressions of sexuality that can be found in real life. In any culture, masculinity is multidimensional and multilayered. Yet almost none of this complexity can be found on China’s bathroom walls. Instead, bathroom graffiti depicts a one-dimensional, crude masculinity: It is heterosexual, dominating, ambitious, and aggressive.

The pressure to conform to this standard can be anxiety inducing. And studies have shown that when men feel as if their masculinity is threatened — such as by the rising social status of women — they are more prone to lashing out, whether physically or emotionally. It should therefore be of no surprise, then, that when male college students encounter problems either related to women or to their own gender and sexual identities, they resort to macho fantasies in which they can control and degrade women. Since the audience for their artwork is almost entirely male — and therefore presumably also influenced by this mindset — artists seek approval from other men by valorizing the sexual conquest of women. These graphic portrayals of male dominance create a shared space for men and allow for a collective display of masculinity.

The pressure young men feel is compounded by the fact that the narratives surrounding sexuality in contemporary China are complex and frequently contradictory. Wang Jinling, a researcher at the Zhejiang Academy of Social Sciences in eastern China argues that modern Chinese sexuality consists of four distinct layers: traditional, patriarchal, male-dominant sexuality; imported ideas from the West, including the separation of the public and private spheres and the commodification of women; Chinese Marxist rhetoric, in which sexuality is limited to the needs of revolution and the state; and contemporary sexual trends abroad, including calls for greater sexual diversity and a gentler, more sensitive approach to masculinity.

The rapid pace at which China’s gender dynamics have been transformed over the past few decades means that men are suddenly no longer assured of a dominant social and economic position at work or in the home. Bathroom graffiti is not just reflective of a collective revolt against these changes and an attempt to extend the lifespan of retrograde sexual politics — it is indicative of a crisis of masculinity in the face of broader social trends. It is a way for men to act out their patriarchal fantasies of controlling female bodies and vent their frustrations about their declining status in a male-dominated space.

With that said, many young Chinese men are neither interested in, nor feel capable of, performing masculinity in the way society demands. Anxiety about their ability to fulfill traditional masculine roles is therefore a major source of frustration for many of them — and fuels the behavior and attitudes seen on bathroom walls. If this problem is to be addressed, we must adopt a more open-minded attitude toward masculinity — one better in keeping with how our society has evolved. More and more Chinese have come to accept that there is no one right way to live. Now, young men must also be taught that there is no one right way to be a man.