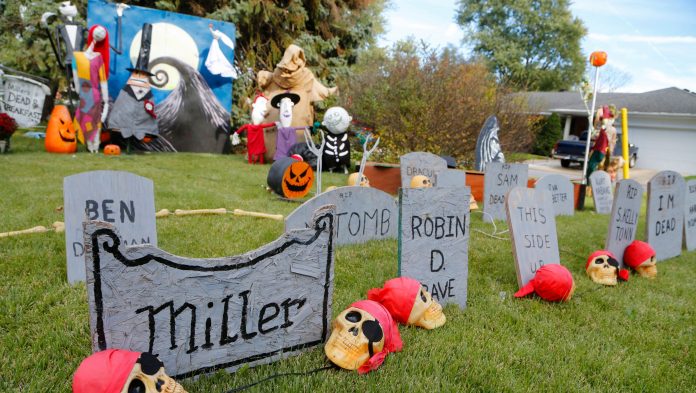 Halloween decorations, including several of the characters from the move “The Nightmare Before Christmas” cover the front yard of Ken and Connie Miller’s home Tuesday, October 16, 2018, in the 2600 block of Main Street in Lafayette. The couple have been decorating their front yard for Halloween for about the past 15 years.(Photo: John Terhune/Journal & Courier)Buy Photo

LAFAYETTE — The teenagers weaved through the cardboard graveyard at the corner of Main and 27th streets.

As they approached the small cement porch they noticed a body in a wooden coffin.

Motivated by candy they inched closer.

She rose slowly up from her homemade coffin and flashed the teenagers a toothy smile, vampire fangs and all.

And of course, the teenagers screamed and laughed and came back for more next year.

Connie and her husband, Ken, have dozens of stories like this of all the hijinks they’ve pulled on Halloween over the last 15 years.

Halloween decorations cover the front yard of Ken and Connie Miller’s home Tuesday, October 16, 2018, in the 2600 block of Main Street in Lafayette. The couple creates and personalizes most of the decorations by hand. The Dead & Breakfast Inn even has the real year the house was built. (Photo: John Terhune/Journal & Courier)

Their house — you probably know the one — has become a local attraction on Main Street. Every year, the Millers put out dozens of headstones, skeletons and ghosts.

The couple crafts nearly all of the decorations by hand, often personalizing what is store bought, and estimates spending at least a few hundred dollars in spray paint alone.

The yard has become a backdrop for an entire scene out of Tim Burton’s “A Nightmare Before Christmas,” featuring the entire cast from Jack Skellington to his love, Sally, to their foe, Oogie Boogie.

“They always make the women look so dumb,” she said. “They’re always running into the locked closet and getting killed.”

But when Burton’s stop-motion animated musical came out in 1993 they both fell in love with the story.

So far they’ve gone through three versions of the leading man, Jack. The first had a head made of foam. He’s still around. Ken has repurposed him to sit on top of a different scary statue.

The second Jack was stolen right off the lawn.

This prompted security cameras and long leashes tying down the characters.

The third and final Jack stands at eight-feet tall. He, like most of his cast mates, is made up of a combination of PVC pipe and chicken wire –with the exception of the Mayor who gets his round body from a hula-hoop and cone head from a lampshade.

Jack has become the most recognizable fixture in the yard. One year, when the Millers both caught a cold right after Halloween and the snow fell early Jack stayed up until November.

At that point, the family received an anonymous letter in the mail asking for the decorations to be taken down.

Their response? Make the Halloween decorations into Christmas decorations.

The pumpkin archway is now a staple in their yard and stays up all year round.

Connie and Ken Miller talk about the people, both children and adults, who have come to their house over the years to see the Halloween decorations that cover the front yard of their home Tuesday, October 16, 2018, in the 2600 block of Main Street in Lafayette. Oftentimes they dress up together in elaborate costumes like the Joker and Harley Quinn or The Adams Family to hand out candy. (Photo: John Terhune/Journal & Courier)

Overall, the response to their yard has been overwhelmingly positive, they said. Whether its coworkers, family members or just strangers, there are constant requests for more Halloween spirit. There’s even the occasional ghost or skeleton that gets dropped off on the porch, hoping to find a new home.

The one year the Millers were slow to start decorating due to a bathroom remodel they got a knock on the door from a concerned fan, Ken said.

After doing this for more than a decade, the Millers have started to recognize the same trick-or-treaters arrive every year to get their annual photo.

“Our son has grown up now so we really just want to make something that’s safe for kids to come and enjoy,” Connie said.