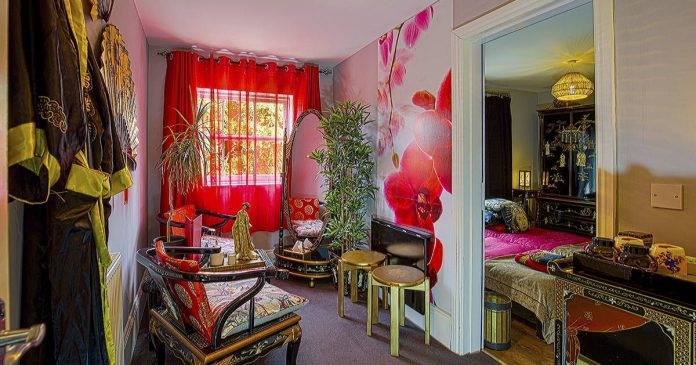 Hidden away behind an anonymous red door on one of Nottingham’s busiest streets is a boutique guest house which transports guests to some of the world’s most popular cities.

From London to New York and Paris to St Petersburg, Mama’s Inn takes visitors on a journey of discovery with romance or adventure in each of the ten themed rooms.

It’s been a real labour of love for Russian interpreter Marina Peshchanitsky and her husband David Sly, a retired IT consultant.

“I said to my husband, I want a hotel and he said ‘do you know how to spell it?’ The villas were under renovation – the first thing I saw was a dead rat. It didn’t put me off. I knew it had been derelict for some time.

“I was mulling over ideas to make it special and originally thought of composer’ names but they would have been too difficult to pronounce.”

Instead the 59-year-old chose cities, decorating each room with murals of iconic scenes – from the Eiffel Tower to Venice’s Rialto Bridge and camels trekking across the Egyptian desert.

There’s a wow factor for travellers as soon as they open the bedroom door. Each cushion, wall clock, duvet cover, rug, chair, and wardrobe has been carefully chosen to recreate an authentic experience. Even the style of tea cups reflects each diverse culture.

It’s not just the bedrooms. The dining room is Versace-inspired and the bar’s backdrop is a mural of the Lords’ library at the House of Parliament.

Since opening in 2014, Mama’s Inn has attracted couples wanting a romantic weekend, parents of students at Nottingham Trent University, theatre-goers and rock fans.

“It’s a quirky hotel with quirky guests,” said Marina. “I just want people to enjoy staying and remember it.”

The very British decor comprises Union Jacks and red telephone boxes. The rug, table and chairs, artwork and cushions are patriotically patterned with red, white and blue. The wardrobe is a lifesize telephone booth and a mural showcases the famous landmark.

A dreamy, romantic room where the four-poster bed, brought over from France, is the focal point. Reflecting one of the world’s most beautiful cities, hand-picked knick-knacks and vintage style furnishings create a Parisian air. The bathroom has a ‘window’ looking out onto the Eiffel Tower.

A magnificent city like St Petersburg demands a lavish room, decked out with turquoise, white and gold and an emperor size four poster bed with satin and stone-washed linen.

Anyone who watched the World Cup games broadcast from the Russian city might recognise the Hermitage Museum on the mural.

Rich red and gold shades and a canopy over the bed turn an ordinary room into one full of Middle Eastern promise. The hand-picked Moroccan furnishings, drapes, jewel lamps and a dome wardrobe transform the room into a lavish desert bedouin tent.

Red drapes and an orchid mural welcome guests to the sitting room of the suite, where silk kimonos and a giant fan hang on the wall. The exotic and elegant oriental room is equipped with low Japanese-style beds and black mother of pearl inlay furniture decorated with orchids and pagodas.

An exotically-styled haven with bold prints and rich colourful decor in gold, black and blue. Guests can gaze at camels trekking across the Egyptian desert, sphinx on top of the wardrobe or striking Tutankhamun artwork.

All the hustle and bustle of NYC has been captured with busy and vibrant decor in the multi-coloured three-bed room. Industrial yellow furniture create the classic city look against a backdrop of skyscrapers, while duvet covers graced by the Statue of Liberty, stars and stripes’ cushions and a Coca Cola fridge complete the all-American design.

One of the most luxurious and romantic rooms full of grandeur with an ornate gold bed and warm red tones, inspired by the fairytale of Venetian canals, breathtaking architecture and gondola rides. A mural of the city’s famous Rialto bridge at night dominates the ostentatious room.

The attic bedroom has six beds, making it popular with hen parties. Rather than taking inspiration from a city, the space has been made to look like a log cabin with wall murals, rustic decor and neutral woodland tones. The inside of a tree trunk rug adds a finishing touch.

One of Marina’s favourite designers Versace was the inspiration for the room where guests have their breakfast. Flamboyantly decked out in black and gold, it’s not your typical guest house dining room.

Guests can have a drink overlooking a striking mural of the Lords’ library in the Houses of Parliament, sitting on chairs with with backs resembling a dinner jacket and bow tie.

THINGS TO DO IN NOTTINGHAMSHIRE

To receive one WhatsApp message a day with the main headlines, as well as breaking news alerts, text NEWS to 07790 586202. Then add the number to your phone contacts book as ‘Nottingham Post’.Your phone number won’t be shared with other members of the group.