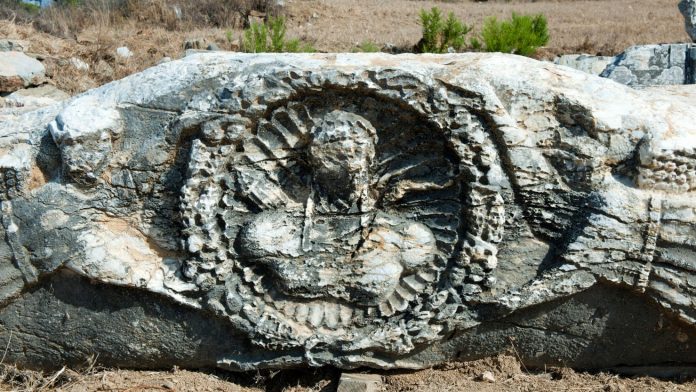 Thanksgiving is a time when people, thrown together into close quarters with their nearest and dearest, need a place to seek relief from the constant haranguing they receive from family members. And there’s no better place for that than the bathroom. Scrolling through one’s newsfeed while lodged between a basin and a wall is the perfect refuge from the chaos and constant togetherness. We’re not the only ones who find light-hearted relief in the latrine: excavations in ancient Turkey recently revealed that dirty jokes were all the rage in the ancient bathroom.

Mosaics on the floor of 1,800-year-old public toilets in Antiochia ad Cragum, a city on the southern coast of Turkey, reveal some amusing sexual puns. The second-century Roman mosaics are based on ancient mythology and show Narcissus (from whom we get the term “narcissist”) preoccupied with his own penis. According to the myth, Narcissus, a beautiful young man, fell in love with his own reflection. In the latrine version Narcissus has a notably long nose (something ancient Romans didn’t consider beautiful), and when he gazes down into the water he is actually admiring his large penis rather than his nose.

In the second scene, Ganymede is having his genitals washed by a bird holding a sponge. According to Homer, Ganymede was the most beautiful mortal in the world. Zeus fell in love with him and kidnapped him to serve as cup-bearer among the immortals. In the mosaic Zeus is shown not as an eagle but a heron. Ganymede (who in ancient art is usually shown holding a stick and hoop) is holding a sponge known as a tersorium. This the same kind of sponge that, ordinarily, would have served, in the words of historian Stephen Nash, as a communal “toilet brush for your butt.” Heron-Zeus grasps a sponge in his beak and dabs at Ganymede’s penis. Michael Hoff, an archaeologist at the University of Nebraska-Lincoln, told Live Science this month, “Instantly, anybody who would have seen that image would have seen the [visual] pun… Is it indicative of cleaning the genitals prior to a sex act or after a sex act? That’s a question I cannot answer, and it might have been ambiguous then.” In either case the combination of sexual and scatological imagery in a bathroom context is highly suggestive.

The scientists who discovered the mosaics last summer told Live Science that they were stunned by the discovery. Hoff added that, while a certain literacy with ancient mythology is a prerequisite for understanding the mosaics, “bathroom humor is kind of universal as it turns out.”

This kind of deeply sexualized artwork was common among ancient Greeks and Romans. Some of the gardens of houses in Pompeii were decorated with bronze tintinnabula (wind chimes) sculpted in the form of the penis. Sexual imagery was so prevalent in Pompeii that sexually explicit art and objects were kept—at the instructions of Francis I, king of Naples—in a special “Secret Cabinet” (Gabinetto Segreto) at the Archeologico Nazionale di Napoli. But it wasn’t just Pompeii (which has a reputation for sexually licentious behaviour because so much of its artwork was preserved). To name just a few examples: wine cups often depict what we might call ‘pornographic scenes’; the deity Priapus is always shown with an oversized penis; and a statue of Pan engaged in sexual congress with a goat (to be fair to Pan he was half-goat himself) was found in the Villa of the Papyri in Herculaneum.

Of course you don’t need mosaics to see a penis in an ancient Roman bathroom. Multi-seat bathrooms (known as foricae) have been found all over the Roman world: there is one in the Circus Maximus; one at Ostia Antica, the ancient port of Rome; another at Ephesus in Turkey; another in Timgad, Algeria; and another at the Emperor Hadrian’s second-century villa in Tivoli, Italy. These bathrooms usually sat between eight and 20 people, so most people (men and women alike) would have been used to emptying their bladders and bowels in group settings, cheek-to-cheek. It was only the very wealthy, as Gemma Jansen has argued, who had enough money to guarantee any kind of expectation of privacy.

Of course, bathroom humor could go much further down market than elegantly crafted mosaics. Scatological and sexual graffiti adorned the walls of public bathrooms (and elsewhere) in the ancient world. One from Pompeii reads “Apollinaris, doctor to the emperor Titus, had a good crap (cacavit) here!” Another example of ancient bathroom grafitto reads “don’t shit here.” And these are the tamer examples (click here for the NSFW stuff).

The intriguing thing about the mosaics from Antioch ad Cragnum is that the sexualized jovial tone is by thoughtful design. Many ancient bathrooms were beautiful; with frescoes on the walls, sculptures in the corners and, sometimes, marble slabs for ‘toilet seats.’ Bathroom humor was a matter of taste and consideration.