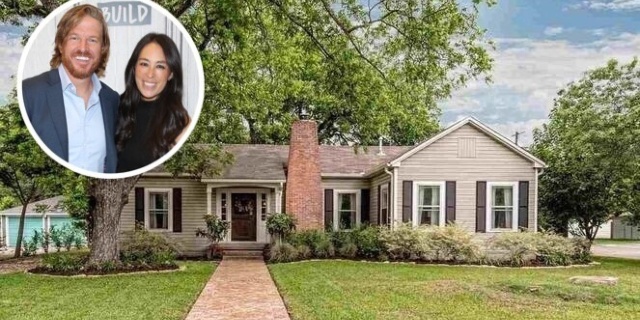 Another Fixer Upper masterpiece is off the market!

After getting a major makeover by HGTV stars Chip and Joanna Gaines, the home coined “The Dutch Door House” on 3201 Windsor Ave. in Waco, Texas’ Highland Park neighborhood was put up for sale earlier this year, but is now officially off the market, according to Realtor.com.

The three-bedroom, two-bathroom single-story ranch house, first built in 1941, appeared on Season 2 of the HGTV show, and after its makeover, was listed at an estimated $308,700 value. An additional guest house provided young couple Kelsey and Trip Purks the opportunity to make some extra money renting it out on Airbnb as they began their family.

Keep scrolling to take a look at the Gaines’ handiwork inside this beautiful, cozy home!

The single-story ranch home got a major facelift courtesy from Chip and Jo, who updated the white paint with a warm gray exterior, accented by white trim and black shutters. Sitting on 0.28 acres, the 2,118-square-foot house is offset by some gorgeous green landscaping and a sizable yard.

The HGTV couple opted to keep the original Dutch doors that gave the home its nickname, painting them to look like dark-stained wood and give it a more modern look. They also added an antique brick-paver walkway to accent the original chimney, according to the network.

The house’s interior is cozy and perfect for family living, including an open-concept living room, kitchen and dining room upon entering. Accented with beautiful wood flooring and rustic decor, the Dutch Door House looks like the perfect place to unwind after a long day.

After taking a load off, the residents can relax by the original fireplace, painted white and accented by a wooden mantle. “Every detail of this home plays back to the original character — the solid wood floors throughout, crown molding, and the wood burning fireplace,” agent Haley Holden said of the home, according to Apartment Therapy.

Chip and Joanna are known for their love of open-concept, and the kitchen/dining room area is a perfect example of their touch. The bench-style dining area sits next to a side door, giving it a perfect amount of natural light in addition to the rustic chandelier. The kitchen, which features subway tile backsplash, has updated appliances and white cabinets to give the room a clean feeling.

The abundance of natural light carries over to the master bedroom, which looks cozy and rustic with four massive windows, wood floor and clean lines. With a simple decorating scheme and bohemian rug, this bedroom is the perfect place to catch some z’s.

The subway tile from the kitchen carries over to the bathroom, which has a light and clean vibe with the cream walls and white tile. Also giving the room character are the his and hers vintage sinks, which rest on a gray antique vanity.

One of the more unique qualities about the Dutch Door property is the guest home in the backyard.

According to Airbnb, the “cozy backyard guest quarters” features one bedroom, one bathroom and its own kitchen for the cost of about $69 a night.