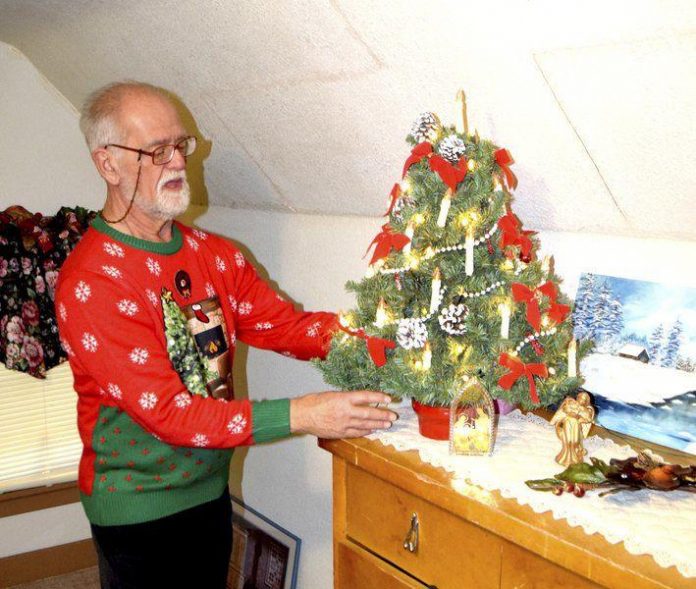 STEWARDSON — While pastors have spread the spirit of Christmas this season, one Stewardson pastor has also shared his spirit of decorating.

The Rev. David Ducommon has decorated the United Methodist Five Point Parish parsonage in Stewardson for the past couple of years and enjoys showcasing his Christmas decorations, especially during the Stewardson Christmas Walk sponsored by the Stewardson Historical Museum. The walk was held earlier this month.

As Ducommon greets each guest into his home, he reminds them of four things to look for in each room of the parsonage.

“Every room has a lighthouse, a Christmas tree, an angel and a Nativity,” David Ducommon said. “Some rooms have many more than one, but every room has at least one.”

Ducommon starts decorating his parsonage a month before the Christmas Walk. Not only does Ducommon decorate the first floor of the parsonage, he also decorates the upstairs.

Stockings for each of his family members hang in the living room that also includes a large decorated Christmas tree.

The living room leads into his nostalgic room with a Christmas tree bearing decorations over 46 years old collected from his families’ past Christmases. Areas of the room also are themed.

One corner of the room is the music corner and features music awards Ducommon has received, along with photos and memorabilia from famous musical artists he has enjoyed and worked with over the years. Ducommon has been singing gospel music for over 55 years. The collection included a handkerchief from Vestal Goodman from the Happy Goodman Family gospel group and photos of Dino Kartsonakis, a gospel pianist who Ducommon jokes accompanied him at a concert in Terre Haute, Indiana, when someone at the last minute developed laryngitis. Among the decorations in the music corner is a white bear with a top hat and bow tie playing the piano.

The nostalgic room has plenty of tables and chairs for entertaining family members during Christmas. Ducommon calls the room Grandpa Duke’s Cafe. He has two children, seven grandchildren and one great-grandchild. It also serves as a church meeting area during the year.

Ducommon’s church history corner includes a photo of the church in Robinson, where he grew up. A family memories corner is populated with photos of seven generations of family members and decorated with a Christmas village.

The dining room is accented with a Christmas-themed table serving given to Ducommon by a female chef from Peoria, who also gave him a century-old sled he displays on the second level of the parsonage. Even the bathroom of the parsonage is decorated with a blue Christmas tree to complement the color theme of the room.

A stuffed white Christmas bear collection started by Ducommon, representing every year since 1993, lines the far left side of each step leading up to the second level of the home.

“The bears are led by a commemorative 1993 150th Anniversary of Charles Dickens ‘A Christmas Carol’ bear,” Ducommon said. “I’ve bought one every year since 1993.”

A total of 28 bears line the steps of the parsonage and extend past the top of the stairs around the second level wall. However, one year in the bear collection has special meaning to Ducommon, who pointed out he has two bears representing 2004.