Home Bathroom Parade of Renovations shows how to fall in love with your house... 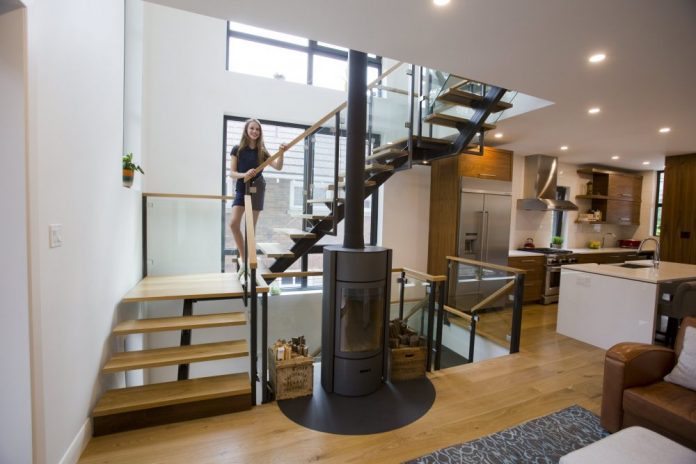 The kitchen is dated. The laundry room is in the basement. Family members trip over each other. But you love where you live.

What: Parade of Renovations

Where: Eight homes throughout London. See map at https://lhba.on.ca/en/renovating/parade-of-renovations.

Tickets: $10 available at any of the homes. Proceeds go to support Youth Opportunities Unlimited programs.

The London Home Builders’ Association had you in mind when they established the Parade of Renovations to provide inspiration and information. The 28th tour, on Sept. 30, shows the idea was bang on.

This week the Homes section gives you a sneak peek at three houses transformed by new renovators on the tour. Next week goes inside four more on parade.

Greg Hassall and his team took a 100-year-old farmhouse with two additions and created a modern home. By flipping spaces and removing walls, they improved the flow. By replacing all the windows, they brought in light and the view. They unified the look inside and out.

“The front looks a lot different,” said Simon McTurk, project and site manager. “We stripped the house down to the framing and rebuilt it.”

Hassall said they removed a chimney, added peaks and a timber structure to update the exterior. The stone added to the front was installed on a back wall. “It was a significant upgrade,” said Hassall.

A cabana by the pool was built in the same style as the house.

The entire back wall is full-length windows with doors to a large deck. “The back was blocked off. There was no view. The deck was a pretty ambitious project,” Hassall said.

The laundry room had been part of the garage. “A big thing for the owner was to have a main floor laundry,” he said.

“We flipped the bathroom and a TV room,” said McTurk. “It was awkward space. We also flipped the stairs.”

Skylights bring light to an office and bathroom. Sliding barn doors provide privacy without taking space. An abundance of storage is provided in the kitchen and a walk-in closet in the master bedroom.

Many walls were removed. Hassall said they added 12 support beams. “It expanded the living space significantly,” he said. “It’s a perfect spot to have a party.”

“We knew exactly how we used the space,” said Dan McCann. “We knew where we wanted light switches.”

What they wanted was modern and light-filled. Who they wanted was Chris Haindl of McKaskell Haindl Design Build (now with Cardinal Kitchens) and Brodie Watson, owner of Brodco Construction.

The house wows from the get-go: glass walls in the entry, LED strip lighting, accent walls in vivid blue and green, a kitchen that looks as good as it works, and a black ceramic fireplace wall.

“What I liked was the process,” said Wendy. An appliance cabinet in the kitchen had always been hard to access. “Brodie suggested a pocket door and Chris made it beautiful. They had great ideas and fun things we would not think of on our own.”

The entry is one of those ideas. Old oak railings, and bannister with a peek-a-boo to the living room were removed. The wall was extended, a glass wall added by the stairs and another in the music room overlooking the stairway.

In the ensuite, the floor, shower wall and vanity top are a thin ceramic product made in larger pieces, requiring less grout. “Basically it looks like stone,” said Watson.

1. “Definitely the foyer,” said Watson. “The entrance with glass walls and the contrast of the glass and blue walls.”

2. The ensuite — “It’s one of my favourite things with a lot of extras.”

3. The kitchen with a lot of contrasts in materials, use of wood.

How do you move from a 100-year-old house to a modern new-build? Ask Heather and Andrew Cammaert. “We always lived in old homes,” said Heather. “We thought we wanted to try something different.”

Their previous house sat on an L-shaped lot. “It was dark and beautiful, full of wood,” said Heather. But after severing the land, they built a new house.

“We had the advantage of living here before the house was built,” said Andrew. Knowing how the sun moved, how busy the street was, and what style they wanted helped them design a house that fits in with the neighbourhood and meet their family’s needs.

“We wanted to focus on a minimalist approach that was energy efficient,” said Andrew. “We wanted building materials that would blend into the Old South. Scale was really important.”

“The staircase is our favourite,” said Heather. “To me, it’s the focal point of the house. The way it’s designed is to allow the natural light in.”

“It does cast some cool shadows,” said Andrew.

“The wood stove is something we splurged on,” he added. “It’s high-impact in the centre of the house.”

The black walnut kitchen cabinets are a nod to trees felled for the build. The wood from those trees will be made into furniture in the future.

The upper level is dedicated to the two children, each with their own bedroom, loft and climbing wall. There is a shared space to hang out with friends. The master bedroom and ensuite are on the walk-out, lower level, as well as an office, gym and laundry.

1. “The use of space,” said Heather. “It’s not a big house,” said Andrew. “People might appreciate what we’ve got in it. It’s 21 feet wide so it was a struggle to get all the amenities.”

2. Use of materials. “Often modern can be cold, that’s why I wanted to introduce a lot of wood,” said Andrew.

3. Heating system and insulated concrete floors. “All the old houses have been a struggle to be comfortable. This is comfortable all seasons.”