Home Bathroom Next Hatebreed Album May Be ‘Dark’ + ‘Morbid’ 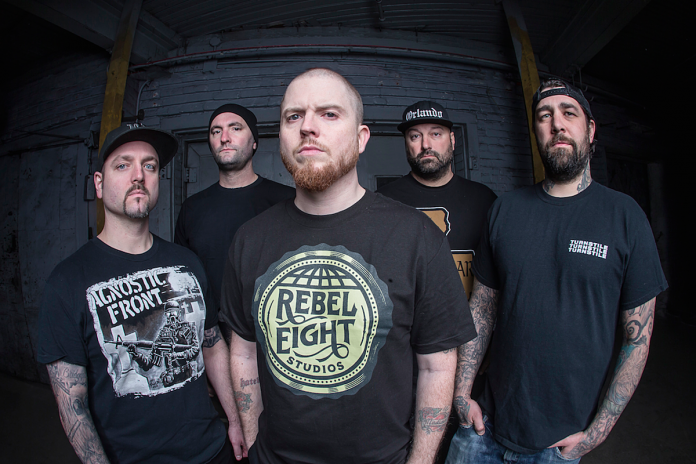 Hatebreed‘s Jamey Jasta was the latest guest on Full Metal Jackie’s weekend radio program. The singer discussed balancing so many different projects and roles, which led to him seeing a sleep therapist due to working long hours.

Jasta also discussed Hatebreed’s ongoing 25th anniversary tour as well as the success of their latest album, The Concrete Confessional. As for what comes next, he’s got ideas floating around for a new Hatebreed record, but he’s at a crossroads lyrically as he’s unsure if he wants to move in a “dark, morbid” direction and away from the usual positive themes.

Read the full interview below.

Obviously so happy on a weekly basis to have “Jasta’s Weekly Pick From The Pit” so thank you for doing that for so many years now.

Thank you for always giving me a place to play some bangers, as I like to call them. Thank you for all that you do and for all the support. We’re very appreciative. I like reading the tweets and the Instagram messages and the Facebook comments.

Hatebreed are celebrating 25 years with an anniversary tour. Congrats, by the way. What does longevity mean to you when you literally and figuratively built a career with your bare hands?

I guess it just means that we’ve got to thank our lucky stars every day because we’re not one of those bands that have this skyrocket to success and then sort of having to come back to reality. It’s always been slow and steady wins the race, and we’ve been able to keep doing it by just sheer work ethic.

Of course, I think it’s safe to say that we’re pretty consistent with our records. Maybe a couple of songs here and there didn’t react as we wanted it to, but off the last record, The Concrete Confessional, we have our biggest song ever — our biggest streaming, biggest download, biggest single sales.

So that is really fun and really cool. It gives us a few bragging rights being one of those bands that can play something off of recent records and not have it be like a beer break or a bathroom break.

Let’s talk about “Metal Dudes Doing Non-Metal Things.” It’s an amusing look at life beyond the stage. What led to developing that type of web-series?

Well, before I tell you that, I first have to apologize because my daughter said, “Well, um, excuse me, like what about Jackie? What about Lizzy Hale? What about Butcher Babies? What about In This Moment? What about Otep?”

I was like, “You know what? We’re gonna have to change it to metal folks doing non-metal things.” She makes a good point.

And then we were at Bloodstock. Vicky, the promoter of Bloodstock, who is a die-hard metal supporter and the awesome person had mentioned it. We were like, Yeah we really need to switch it up.”

I think people have seen enough dudes in metal. Let’s mix it up. But we started it just as a joke because I think anybody that has been in a metal band always comes across that photographer or that art director or that maybe TV personality or radio personality that wants to have fun and the bands are always so serious.

I had to be that guy when I was hosting Headbangers Ball because that was the vibe they were going for and they were like, “No. Look, you’re the singer from Hatebreed and you gotta keep it serious.” Well now that we’ve been all over the world and back and put out all of these albums — we can laugh a little and we can have a good time. It doesn’t have to be all metal all the time. We can do some non-metal things and do a little web show.

Jamey, you’re very involved in multiple sides of metal. Performing, producing, broadcasting. What’s your biggest responsibility being such a vested ambassador of the genre?

I guess just trying to get two episodes of a podcast out this week and last week and every week and then also trying to stay creative and stay inspired to keep writing. I’ll have these little ideas that’ll start off as a verse and then I’ll change and then I’ll write a chorus and then I’ll write the riff and then over time it’ll turn into something that either I would wanna use in one of my projects or maybe I will submit it to another artist.

I think for anybody who’s creative it’s important to stay inspired, stay motivated and keep doing those types of things because you never know what’s going to get used. Dee Snider — I produced his latest album — was in South America and to see videos of those shows of thousands of people singing songs that I wrote and that I co-wrote, singing melodies that I wrote that I could never do on my own because you fans would be like, “Why are you trying to sing all melodic?” It was just amazing to hear Dee and the crowd singing it and that’s what I try to just keep doing because you never know when those opportunities are going to arise.

And luckily I have had a good last couple years where I have been able to not have songs just hid on the hard drive — they actually got released between The Lost Chapters album I did with Jasta. And then the Dee Snider album and of course the Hatebreed’s The Concrete Confessional album.

Do you ever sleep, Jamey?

I do. I have been seeing a sleep specialist. I have been getting seven hours of sleep a night now. I feel so much better and my health is getting so much better. So, that whole — you see big celebrities like The Rock are only sleeping like 4 hours a day. Some people can do that; I don’t think it is super healthy. I heard Prince would only sleep 3 or 4 hours a day. That whole no sleep, no rest, it’s cool for the song, but right now I do need seven hours a night. [laughs]

Yeah. I am happy with it. I have been feeling much better. I notice that I am like popping out of bed instead of getting like three or four hours of sleep and then catching a nap in the middle of the day. I am just liking seven hours.

I was just in the studio now doing a little jingle for a radio show. I would normally be taking a nap right after that, trying to recharge for the night to get my other work done and now I am actually winding down at night too. I know so many people are going to be disappointed by this, but I am not listening to death metal at night. I am winding it down like two hours before, and then I am getting a nice sound seven. But tour starts soon so that is all going to go out the window.

The Hatebreed brand is firmly established. Creatively how are changes that come with growth and development as a person reflected in your music without disrupting that brand?

I just think that the growth is reflective with us kind of sticking to our guns with themes and overall positivity. I think that was a major change for us from the first album to the second album but when you build a following and you have people reading your lyrics. Making an impression on people, I really felt like I can’t just have this be aimless negativity or emotions that people can misconstrue. I need it to have some sort of positive outcome and from that record on we have always had some positive uplifting themes on every record. That creates this power that keeps feeding us because I’ll be out somewhere — I was out in New York City yesterday and someone stopped me and said, “I don’t want to bother you, but your lyrics have been there for me in my darkest times.”

I am was like, “Thank you so much,” and I never tire from hearing stuff like that and that helps me keep writing and keep creating. We have done a lot of big tours like Ozzfest, Mayhem Fest, Warped Tour… We supported Slayer and supported Black Label Society, Slipknot, Five Finger Death Punch…

We have been able to see heavy music fans of all types, of all walks of life, appreciate a band like us. Who they know played in people’s backyards, played at VFW halls and people’s houses. Then to get to share the stage with Five Finger Death Punch and be in an arena, to be there singing a positive message with a heavy groove and a heavy hardcore and metal influenced sound underneath it. People just really connect with it.

With this 25th anniversary tour we have just over 20,000 tickets sold already. It’s really amazing. We’re just trying to stay grateful and have a positive attitude which the music helps us do and the fans help us do.

The Concrete Confessional was a reflection of the stark reality of contemporary society. What do you feel needs to be expressed with the next Hatebreed album?

I almost feel like it needs to be a heel turn of some sort. I keep thinking these real sort of dark, morbid things and I want a way to express them but I’m also torn because we’ve had all these positive and uplifting tracks on the last few albums.

Occasionally I do write some of the stuff down, and I’m like, “I don’t know, do I want to put that stuff out there?” But by putting it out there, it’s so therapeutic and in the past when I’ve done that, even when the song wasn’t necessarily about me in particular, that’s been very liberating.

So as far as themes go it might just end up being much darker and much more angry but as far as music, we just want to play to our strengths every time and bring that intensity. I love riffs and beats and bass lines that give you a charge when you hear it. It makes you feel something.

Concert people are like this unique breed of people. Listening to a record when you’re at the gym or when you’re at work or a hike or walk, or whatever, or at your house at a party, that’s different than when you hear it when you’re at a concert. So I think because we’ve infused new songs into the set a lot, I think I also want to give this a bigger feel a bigger concert feel, not just a recorded feel, but really give it a bigger sound.

We joked around ever since the FFDP tour we did and said, “We’re ‘Arena-Core’ now.” So we want to make those anthems, of course, but we want it to be really heavy and hard. Make your hair stand up or make you get chills down your spine.

Thanks for having us, hopefully — who knows, maybe we’ll get a third leg added to this tour. We’ve talked to some other bands, and we know we’re missing a lot of cities but if anybody wants to check out hatebreedvip.com there’s about 20 left for the whole tour but we’re also taking suggestions.

Shoot an email into my podcast, [email protected] if we miss a city and you want to suggest, and maybe suggest some bands. Thanks again for everything, Jackie.

Thanks to Jamey Jasta for the inerview. Grab your copy of Hatebreed’s ‘The Concrete Confessional’ here and follow the band on Facebook to stay up to date on tours and other info. Find out where you can hear Full Metal Jackie’s weekend show here.