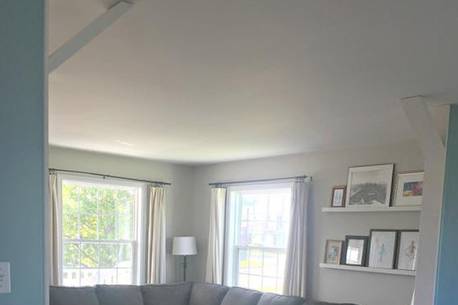 I really wanted an open-concept house. Now I wish I had more walls.

I can’t say I regret buying our house — which doesn’t have a single dividing wall on the entire main level, other than around the bathroom — because it worked well for us when we had babies and toddlers. In those days, I needed to be able to watch the kids closely at all times — even when I was ducking into the kitchen to empty the dishwasher.

Now that they’re six and eight, I feel a longing for one particular house we toured. It was really old and had lots of little rooms, all separated by hallways and doors. I’d scoffed at the closed-off kitchen at the time, but now I think it would be nice to shut myself in there and listen to music quietly while I make dinner … without hearing the TV blasting from 15 feet away.

Anyway, the other issue with an open-concept house is that you can’t easily transition to different paint colours because the whole level is all connected. No walls. No doorways. Just … openness!

After our roof leaked (and we replaced it), we had to repaint the walls around our stairway and into the living room. I still loved the light blue shade we’d chosen for the walls (CIL’s Bear Run) years ago, but felt ready to replace it … at least, I thought I did.

So we repainted the living room in our favourite neutral (Benjamin Moore’s Revere Pewter) and I liked it. But just before my husband started on the kitchen and dining room, I stopped him.

As much as I liked the fresh paint in the living room, I just couldn’t let go of the blue entirely. It still looked so good against the white cabinets, the white frames, the white hutches, the little white desk. Everything popped beautifully against the blue. I worried everything would look too blah and beige without it.

Now I had a dilemma. Our open-concept main level was painted two different colours — half greige, half pale blue — and it looked strange. I don’t like when two different paint colours meet, even if it’s at a corner.

Oh, how I wished for walls to separate the dining room/kitchen from the living room/front hall. If only there was some way we could easily divide those spaces. Hmm …

The solution I came up with was to build simple wooden “archways” — that’s what I call them, despite them not being curved or a real arch at all — to separate the two spaces. My handy husband helped me screw plain 1×6 pine boards into the walls where the dining room meets the living room, and where the kitchen meets the front hall.

Then he cut small angled pieces to make a Y shape up to the ceiling. (Handy husband would like me to tell you this part was frustrating. “I wish I’d paid more attention in math class.”)

Now, I’d wanted to run another board along the ceiling itself to connect them, like beams, but he drew the line at drilling holes in the ceiling. He’s always convinced future homeowners won’t understand my weird ideas, so we compromised — I got the “arches” I wanted, but we left the ceilings untouched. #marriage

The natural pine looked pretty good with our light hardwoods, but I decided they looked too unfinished. So after I’d globbed on some wood filler and sanded off the excess, I brushed on a single coat of white (Casement by Fusion Mineral Paint) to continue our home’s “modern farmhouse” feel.

I still wish I had a few more walls, but this simple project has done a great job of making these two spaces feel more like separate rooms.

And no ceilings were harmed. Ahem.