Home Bathroom Joy all around: Homeowner decks the halls … and every other space... 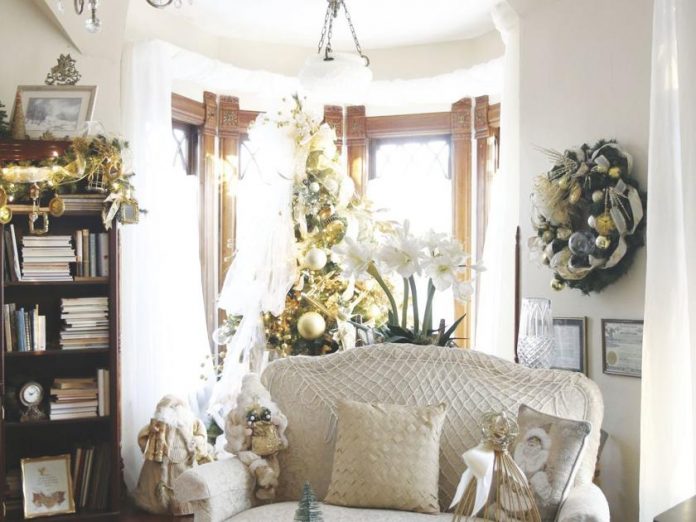 Each November and December, she entertains a steady stream of special requests for a peek inside her 1905 Victorian home in Oakland, Nebraska, about 60 miles north of Omaha.

Every room in the white house with the fairy tale turret is trimmed to the hilt. It’s a passion borne from a lifelong love of floral design, interior decorating, collecting … and Christmas itself. “It’s the love of the Lord first of all,” she says.

If it sparkles, shimmers and shines, Judee will work it into her displays. In 2017, she put on the glitz with gold, silver and white in the dining room, kitchen and master bedroom.

Whimsical and homespun vignettes have a place, too.

In the den and adjoining powder room, a woodland theme reflects husband Bill’s love of the outdoors. Deep hues of green, blue and red and the rugged textures of pine cones, twigs and evergreen boughs make Bill’s space cozy and warm.

Upstairs, a guest bedroom evokes a prairie Christmas theme, complete with antique dolls and toys and furnishings that belonged to Judee’s mother.

An army of nutcrackers commands the enclosed front porch. “Nutcrackers were her Christmas gift for a lot of years,” Bill says. The airy space swirls with playful peppermint accents and a 6-foot tree adorned with delightful wooden soldiers, ornaments and ribbon.

Themed trees are a specialty. Fifteen typically can be found throughout the house.

A 7-foot dried flower tree in the living room draws the most attention. And not just at Christmas. It’s been a work in progress since 2006, with Judee adding stems from her garden season after season. “Everything from the garden comes in for the tree. I just pluck and place.”

Too fragile to move, the tree stays up year-round. “It’s a permanent fixture,” she says.

“Everything has a reason for being in our home,” Judee says. Her room tableaus, the story of her life.

“I’m glad I’m not one of those old people who’s sorry they didn’t try something,” a grinning Judee says of her entrepreneurial spirit.

The Christmas finery stays up until the end of January. Then, in the spring, Judee’s creative energy flows to her gardens, and busloads of visitors arrive again.