Home Bathroom Inside the Altona home inspired by Alice in Wonderland, Harry Potter and... 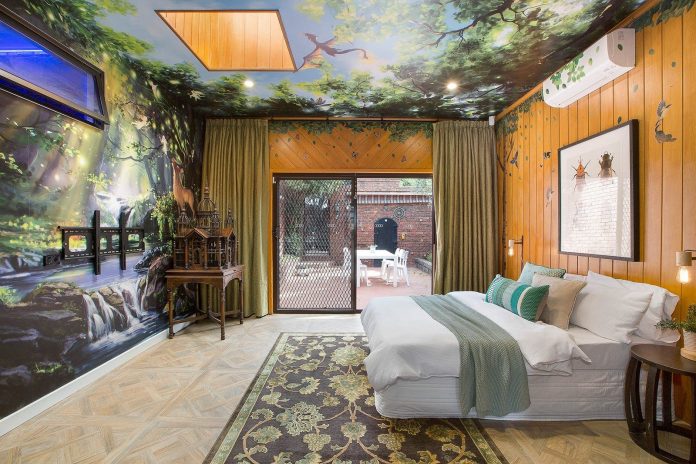 And perhaps that is the most fitting way to describe the weird and wacky Altona home that sci-fi fan Luke and his Disney-loving partner Annabel created.

The interior of their house, recently listed for sale, is an unusual mash-up of favourite themes and styles, inspired by Alice in Wonderland, various Harry Potters,Tales of the Arabian Nights, numerous space landscapes and mystical forests.

“It’s an evocative house,” Luke said. “There’s somewhere in the house for any type of feeling.”

The couple, who both work in forensic mental health, spent a year redesigning and decorating the 1970s brick home they bought for $630,000 five years ago.

From the outside,  it’s a fairly unremarkable brick house with a flat roof and arched windows.

But  it’s inside where things really take an unexpected turn. The arched front door with wrought iron hinges leads into a Medieval grand hall, with an iron chandelier dangling beside exposed black beams on the ceiling.

Beyond the hall are two bedrooms, one of which has wallpaper depicting an enchanted forest , complete with a mystical dragon in flight on the ceiling.

The mural was designed by a Swedish artist Annabel stumbled across when looking for someone to draw portraits of her four cats.

The Moroccan-style master suite, a nod to The Arabian Nights, and its adjoining bathroom are perhaps the most conventional rooms.

The entire house was designed just for Luke and Annabel, exemplified by the different heights of the copper sinks in the luxurious bathroom. “He’s almost two metres tall, and I’m only 157 centimetres,” Annabel says.

And then there is the kitchen, which eclipses everywhere else with its bold design statement. Everything – and they mean every thing – is Alice-inspired. “I’m a huge Disney fan, and a huge pink fan,” explains Annabel quite unnecessarily.

The bright-pink drawers and cabinets, each carved with a heart, were custom-made by a local business.

“It was hilarious because they kept trying to talk us out of the colour,” laughs Annabel. “When people came through their warehouse, they thought it had been designed for a brothel.”

Black and white chequered tiles cover the floor and splash-back, while teapots are fixed to the walls.

The pantry doors are large playing cards – an ace of spades and an ace of diamonds. Even the fridge is painted with a scene from Annabel’s favourite film. Overstimulating? Not for Annabel or Luke.

“I always really enjoyed being in there,” Luke says. “It’s just really nice to have something so spectacular.”

“You get so used to it,” reassures Annabel.

Not far from the kitchen, there’s also a steampunk-themed study, where Luke retreats to play video games. And to top things off, there’s a Tiki bar and spa outside, and a Harry-Potter themed toilet in the garage. It features Potter wallpaper, a 3D Hogwarts crest and a Ministry of Magic sticker.

The couple have listed the property for sale to move closer to the city for work, and already have future renovation plans on their mind. “I don’t think it will be as extensive as this one but I think we’ll always be a bit quirky,” says Annabel.

Agent Theo Panay, of Barlow McEwan Tribe, said the home might not suit everyone, but it had a lot of personality and had captured many people’s imaginations.

“It has its own celebrity status,” he says. “This is not your usual wow factor.”

Mr Panay said those who had expressed interest did not appear to have any desire to knock it down or strip the interiors. “The demand is there,” he says. “I’ve had a lot of calls and people have asked for contracts.”