Home Bathroom How One Kansas City Artist Works At Home But Feels Like He’s... 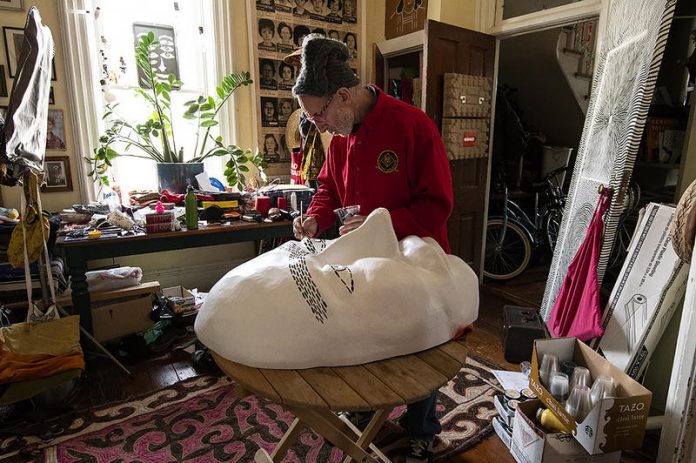 Kansas City artist Allan Winkler’s work is full of whimsy. It’s often found in unexpected places: a mural in a school cafeteria, colorful mosaics in the bathroom of a theater.

Year-round, you can see his folksy metal cutouts on permanent display at the Marlborough Community Center, and The Gathering Place is hosting a show of his work during Open Spaces.

Winkler works out of a home that was built in the 1860s. Visitors to the Westside neighborhood will recognize it from the bottles decorating the fences and kinetic sculptures hanging from trees.

Many of Winkler’s recycled creations are inspired by the outsider art work he’s collected over the past 36 years.

“This house is just full of stuff. Most of it is stuff I’ve collected,” said Winkler. “I just like to be surrounded by really cool stuff.”

Scroll around this 360 video to see the artist at work inside his home studio:

Winkler spends his days frenetically bouncing from project to project. One moment he’s painting an outsized head in his living room, the next he’s upstairs wielding an X-ACTO knife on a paper cutout.

“It’s just so much fun to be making things that I can actually do it anywhere,” Winkler says. “You’re transported. It really doesn’t matter where you are, because you’re somewhere else. It’s so much fun and of course it is nice being home doing it.”

Winkler was just a high school student in Chicago when a teacher noticed his talent and found him his first studio. That led to a scholarship at the Kansas City Art Institute, where he studied ceramics with Ken Ferguson and then spent a year at The Archie Bray Foundation in Montana.

“I made so much stuff that I had to stop,” he says. “Because it piled up so big I couldn’t keep making things. Ceramics really fills your room up.”

A stint at an artful recycling center called Scrap in SanFrancisco ignited an interest in reusing items in his art.

It was at Scrap where Winkler also learned how to make mosaics. This past spring, he decorated the walls of the newly opened SqueezeBox Theatre’s bathrooms with colorful pieces of broken pottery and tile.

These days Winkler mostly creates things that please him.

“Faces are fun,” says Winkler. “I think maybe in some other life I’ve been doing this for maybe 20 different lives now.”

This story is part of a series using 360 video to bring readers into unusual studio spaces of artists in the Kansas City area.