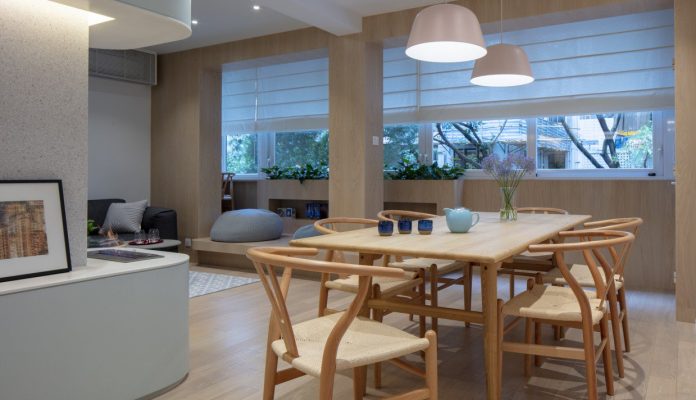 Sometimes, it’s clear when the planets have aligned. That’s how newlyweds Ally Chan and husband Jonas Schmid felt when they chanced on an apartment that shone brighter than anything else in Mid-Levels.

“We’d looked at 20 to 30 apartments and none of them appealed to us,” says Schmid, who is from Switzerland. His Hong Kong-born wife continues: “They were all high-rises and every flat was kind of the same.”

So when the couple saw a “FOR SALE” sign for a tong lau (walk-up building) flat on one of Hong Kong’s most charming, leafy streets, Prince’s Terrace, they called the phone number listed.

Before long the pair would discover they had one up on any other potential buyer: the then owners of the two-bedroom, 900 sq ft flat recognised in the couple a younger version of themselves when they had bought the place in 2001: Hong Kong/Swiss and recently wed.

“They loved the flat so much and wanted to pass it on to people they knew would enjoy it too – not just investors,” Chan says.

And that is what the new owners have been doing, albeit in a space that now bears little resemblance to its previous incarna­tion. Architects Lorène Faure and Kenny Kinugasa-Tsui were behind the 60-year-old apartment’s transformation.

Inside a Hong Kong newlywed couple’s minimal first home together

The founders of Bean Buro concentrated on optimising every square inch, turning an inefficient layout with a core of dead space into a free plan that also subtly references the ideas of two of modern architecture’s greatest names.

Austrian-Czech architect Adolf Loos’ Villa Müller, in Prague, inspired the raised platform along the terrace side of the flat.

“Loos created a pocket on the facade of the Müller house that was an elevated seating space […] situated between inside and outside,” Kinugasa-Tsui says.

Working with the large windows the previous owners had installed along the length of the flat, Bean Buro created an eye-catching corner that is now Swiss chalet, Japanese tea house and tong lau in one. The platform, in engineered oak, doubles as additional seating for the lounge.

The best spot, however, belongs to a desk tucked into a nook at the far end of the platform. From there you can observe people coming and going below, and commune with nature: “If you open that window you feel like you can almost touch the trees,” Chan says.

The interior palette of minty greens and darker hues against light oak creates a dialogue with the greenery outside, Faure says.

The wooden planks also make a feature of a structural column that is part of the platform, turning what would otherwise be seen as an obstacle into a feature. “I fell in love with it,” Kinugasa-Tsui says. “The column made us think of how we could increase the functionality around it.”

Perhaps a more obvious object of beauty is the fireplace, inspired by Frank Lloyd Wright and his belief that “the hearth is the psychological centre of the home”.

Clockwise around the flueless fireplace are a study-cum-guest room, the lounge, dining area and, on the other side of the entrance, an open kitchen. Beside that is a concealed toilet and the main bedroom with en suite bathroom.

Inside a kid-friendly Hong Kong flat, inspired by a nearby waterfall

It is in the couple’s private space that the sole television resides (hidden by curtains if necessary) because, unlike in most Hong Kong homes, the living areas were designed to be free of this distraction.

“We like to invite friends over for dinner and it’s nice to have space only for talking and socialising,” Chan says.

Testament perhaps to the success of the refurbishment is the owners’ new – and “healthy” – way of life. Although the platform was designed also with yoga in mind, it’s not just exercise that has changed their lifestyle.

“I spend a lot more time at home now,” Chan says. “We cook a lot more,” her husband adds. “We do a lot more at home, which is my version of a healthy life.” 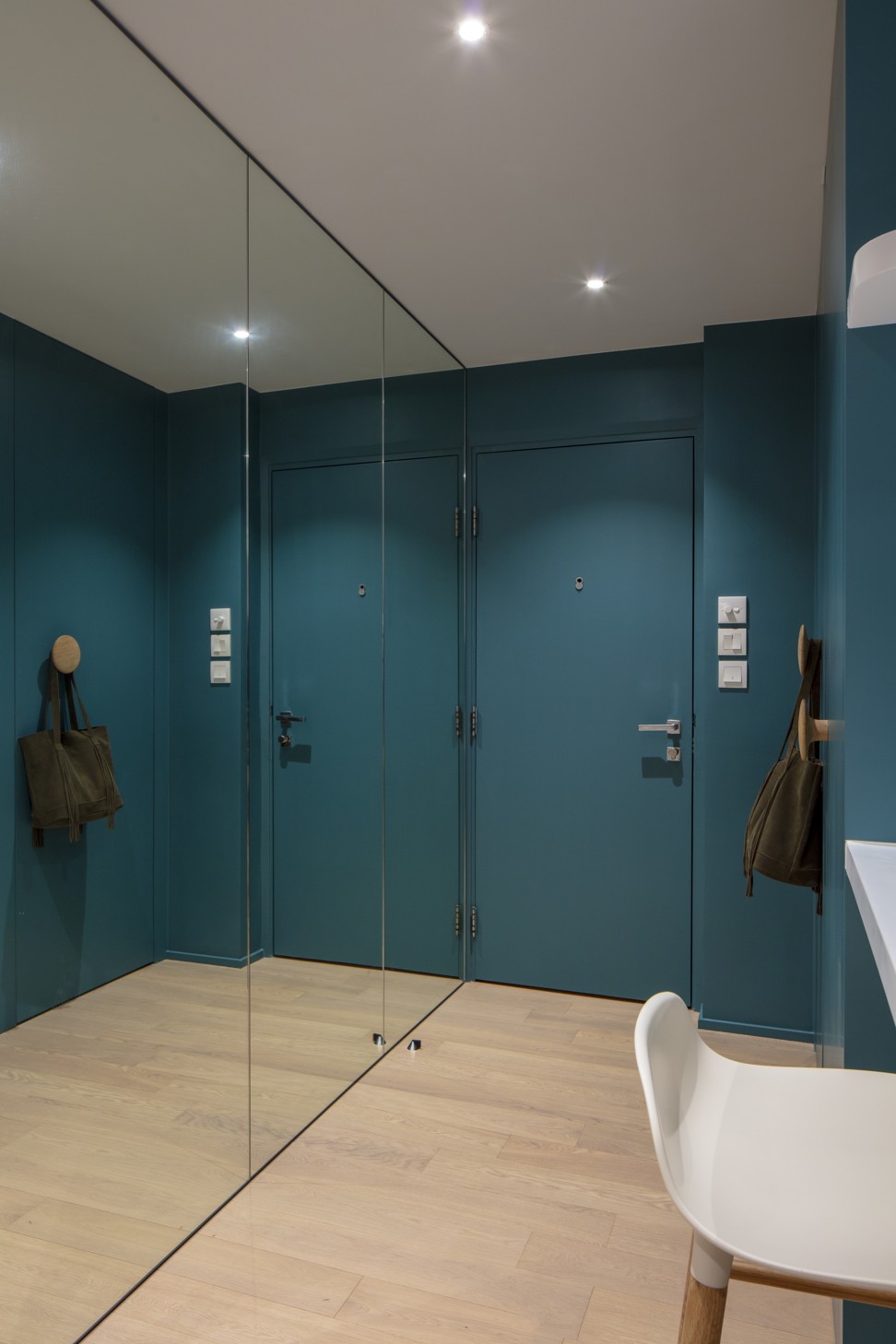 Entrance The simple entrance is painted in Dulux’s “Fall’s River”, available from AkzoNobel. The Normann Copenhagen Form barstool (HK$2,800) and the Dots Muuto wall hooks (about HK$150 each) were from Establo. 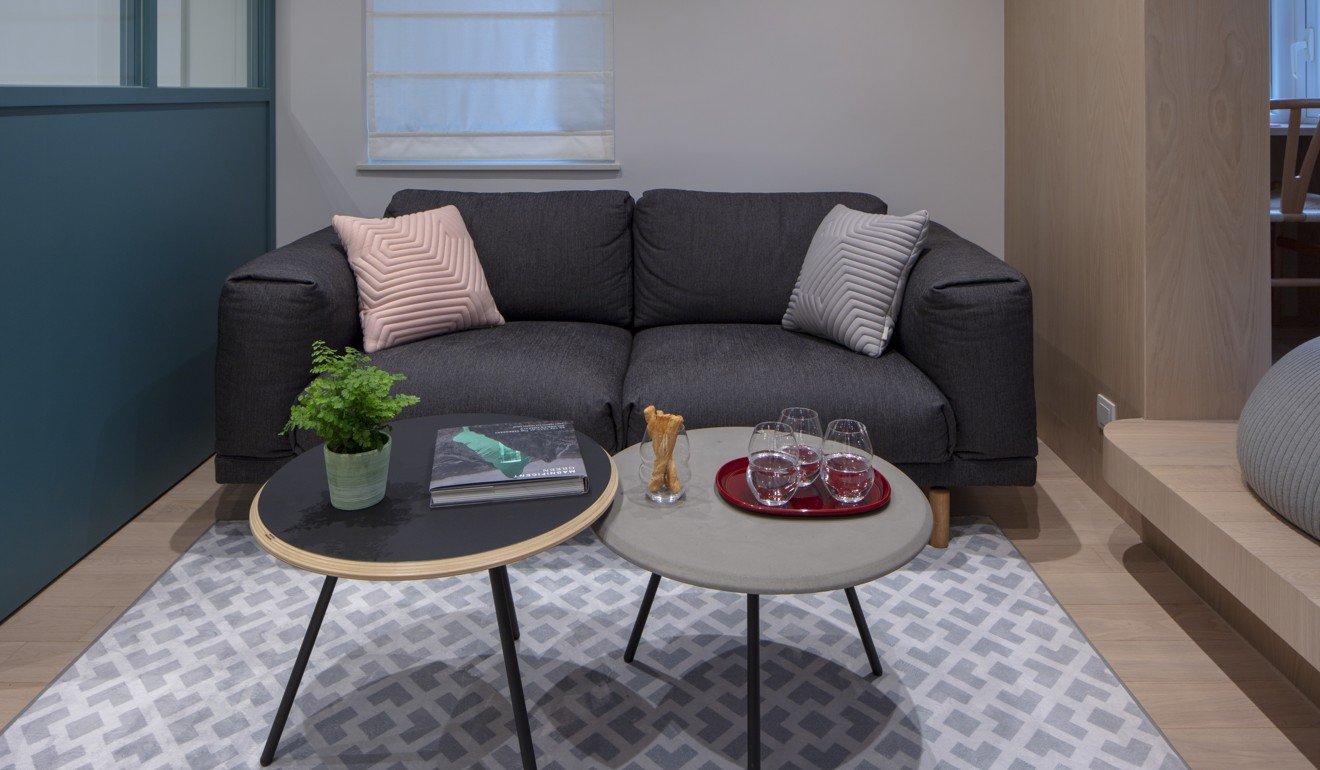 Lounge Between the platform and study/guest room, the lounge is furnished with a Rest sofa by Muuto (HK$31,000), from Manks. The Soround concrete and Fenix coffee tables, by WOUD (HK$7,600 for the pair), came from House for Goodies, as did the Modern Cross carpet by Borny (HK$1,520). On the platform the pouffe (HK$3,000) was from Muji. 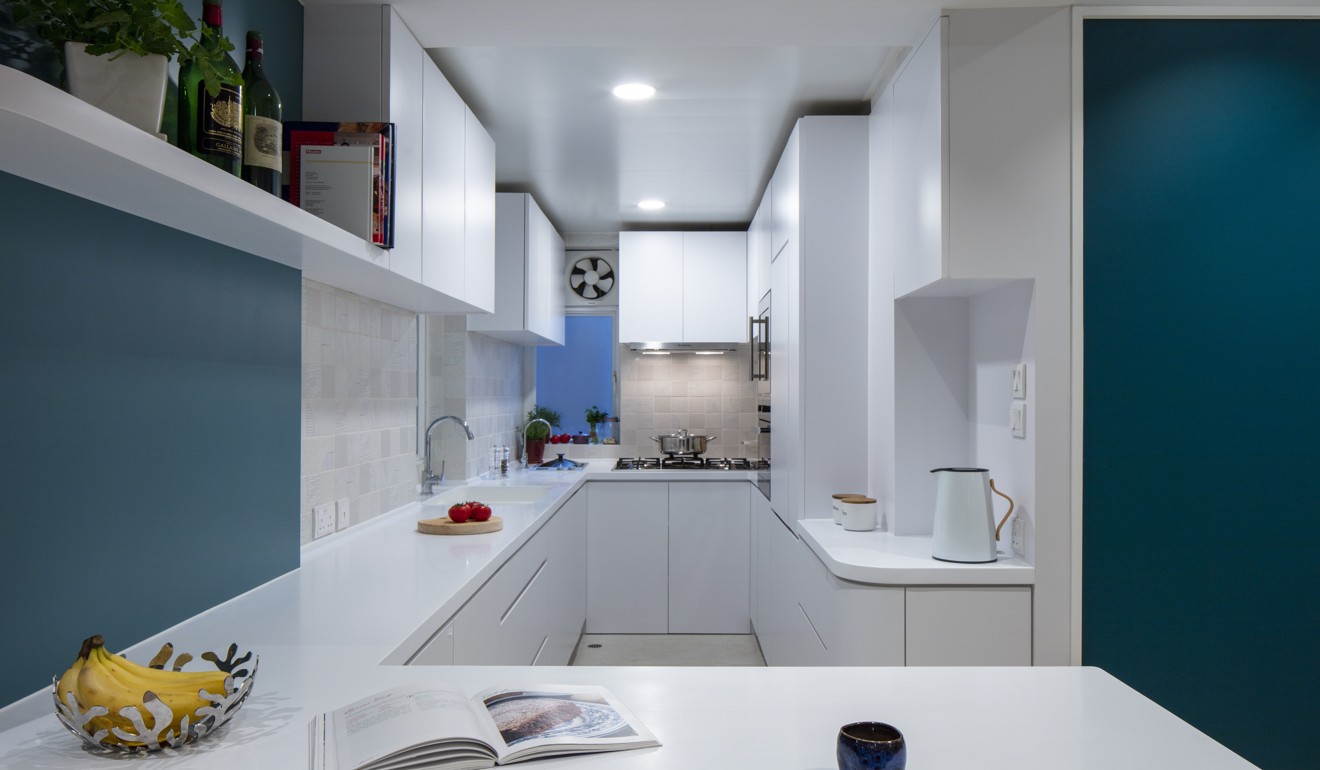 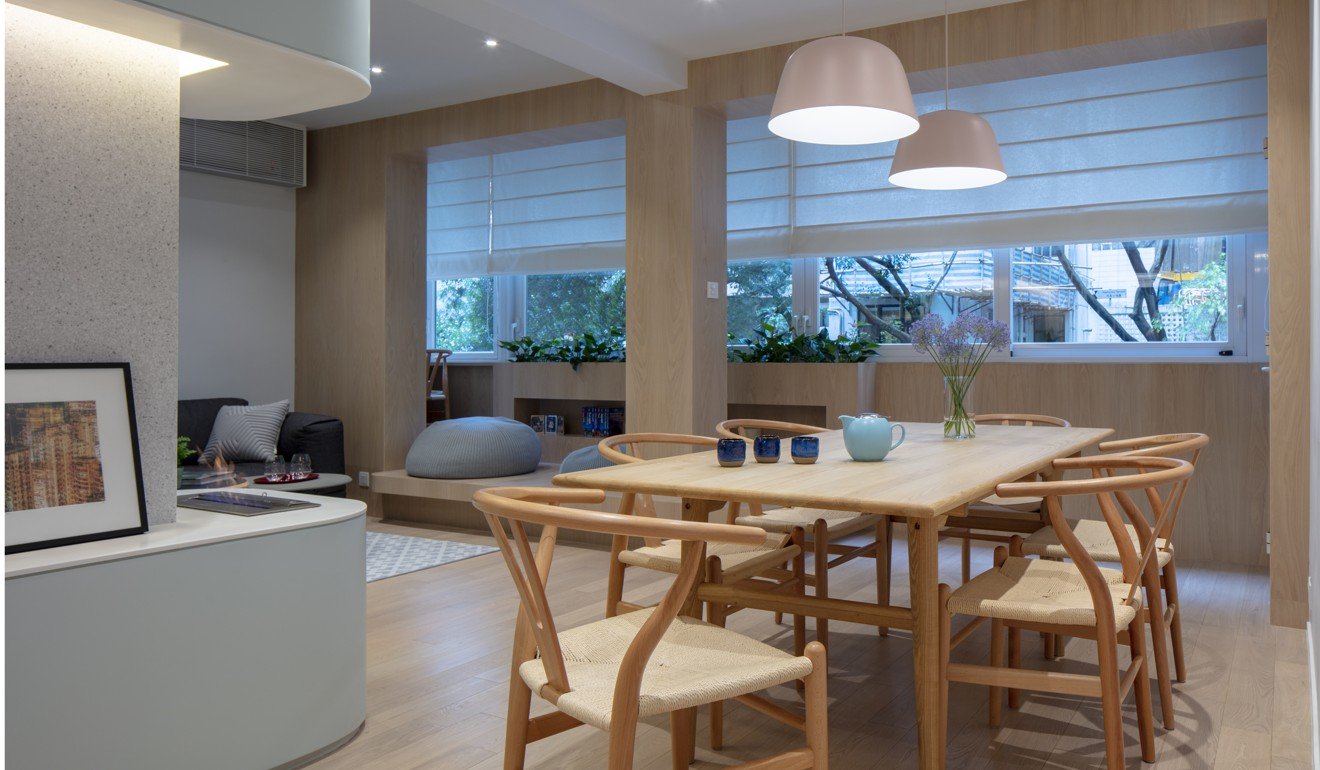 Desk nook Oak was used for the platform, planter and work nook, which overlooks Prince’s Terrace. The Wishbone chair is same as before. The Roman blinds (which cost a total of HK$12,000) were made by New Bedford Interiors (67 Queen’s Road East, Wan Chai, tel: 2520 0330). 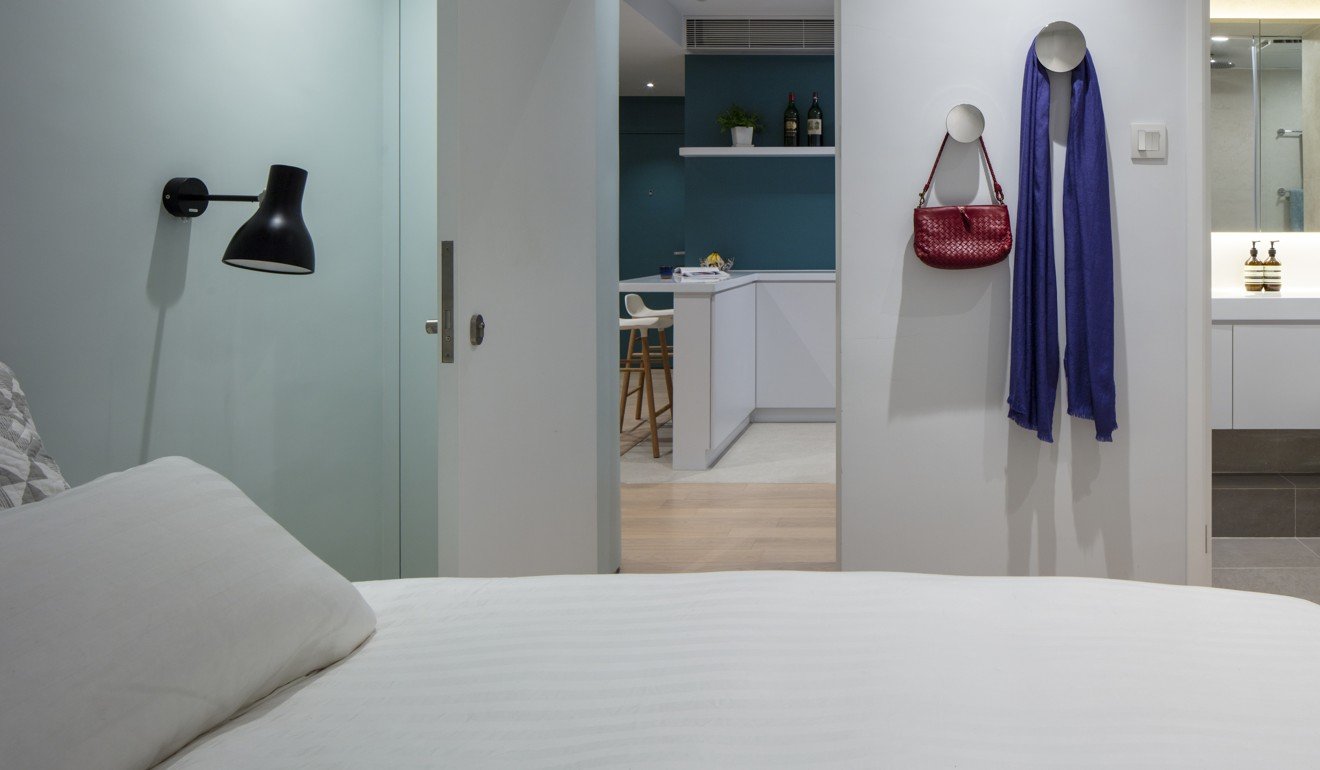 Main bedroom The Aura wall hooks, by New Works (HK$520 for the pair), came from House for Goodies. The Type 75 bedside lamp (HK$500), by Anglepoise, was bought through amazon.com. 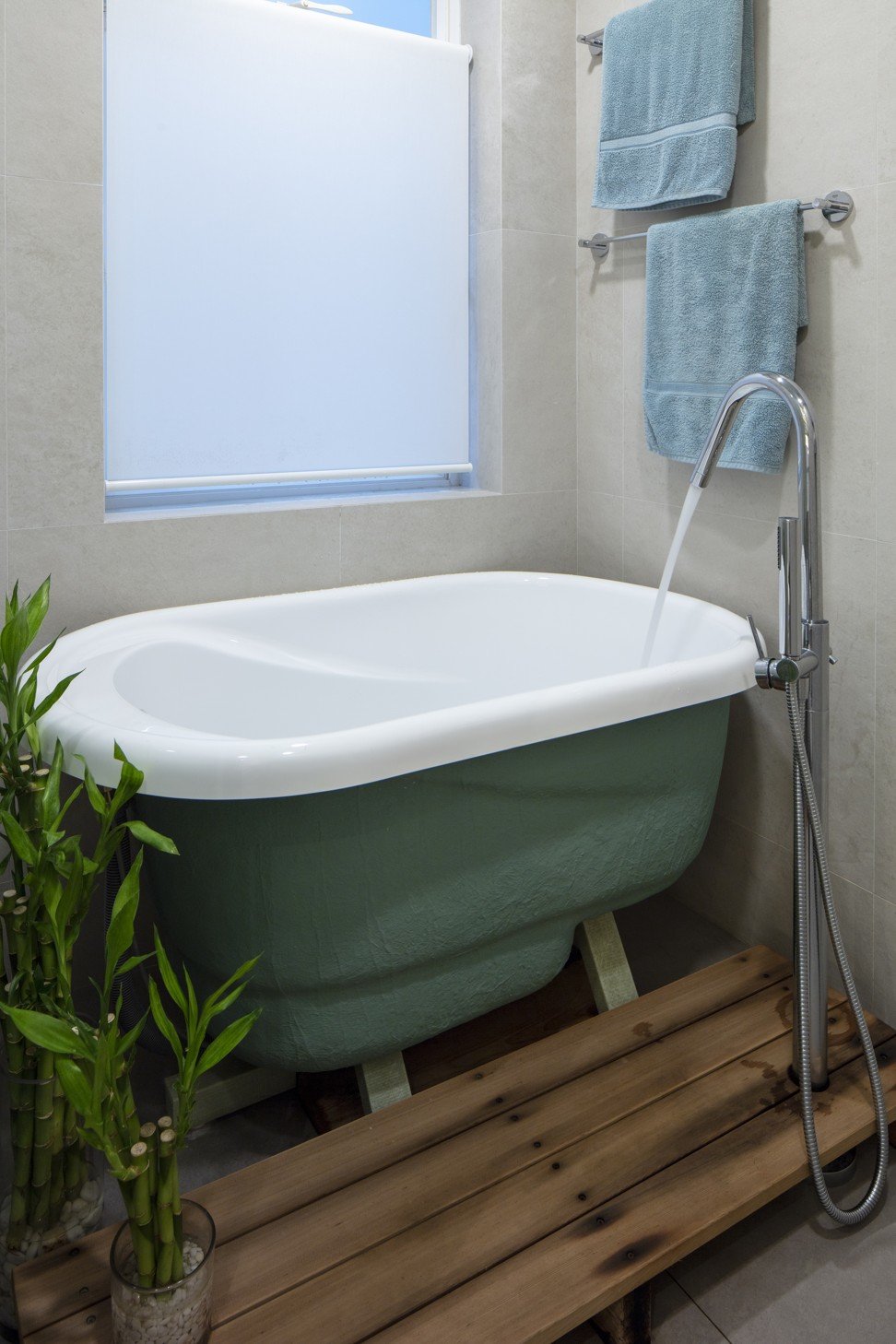 Bathroom The original casing of the tub was removed to allow it to fit into the bathroom. Its underside was than painted to complement the rest of the flat. 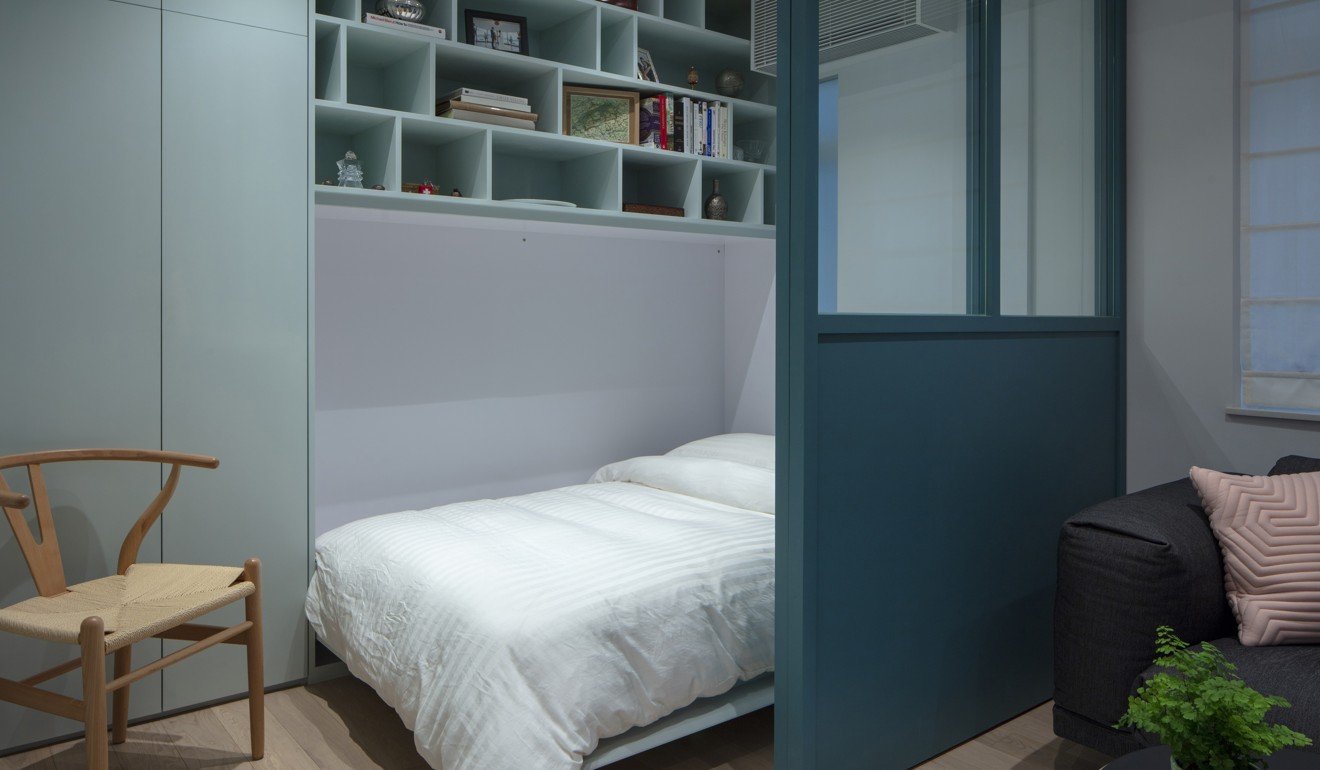 Study-guest room The Murphy bed can be put away to transform the space into a study. Glad Base Group custom made the shelving and storage unit (HK$180,000) in the centre of the flat, plus the Murphy bed (HK$30,000). 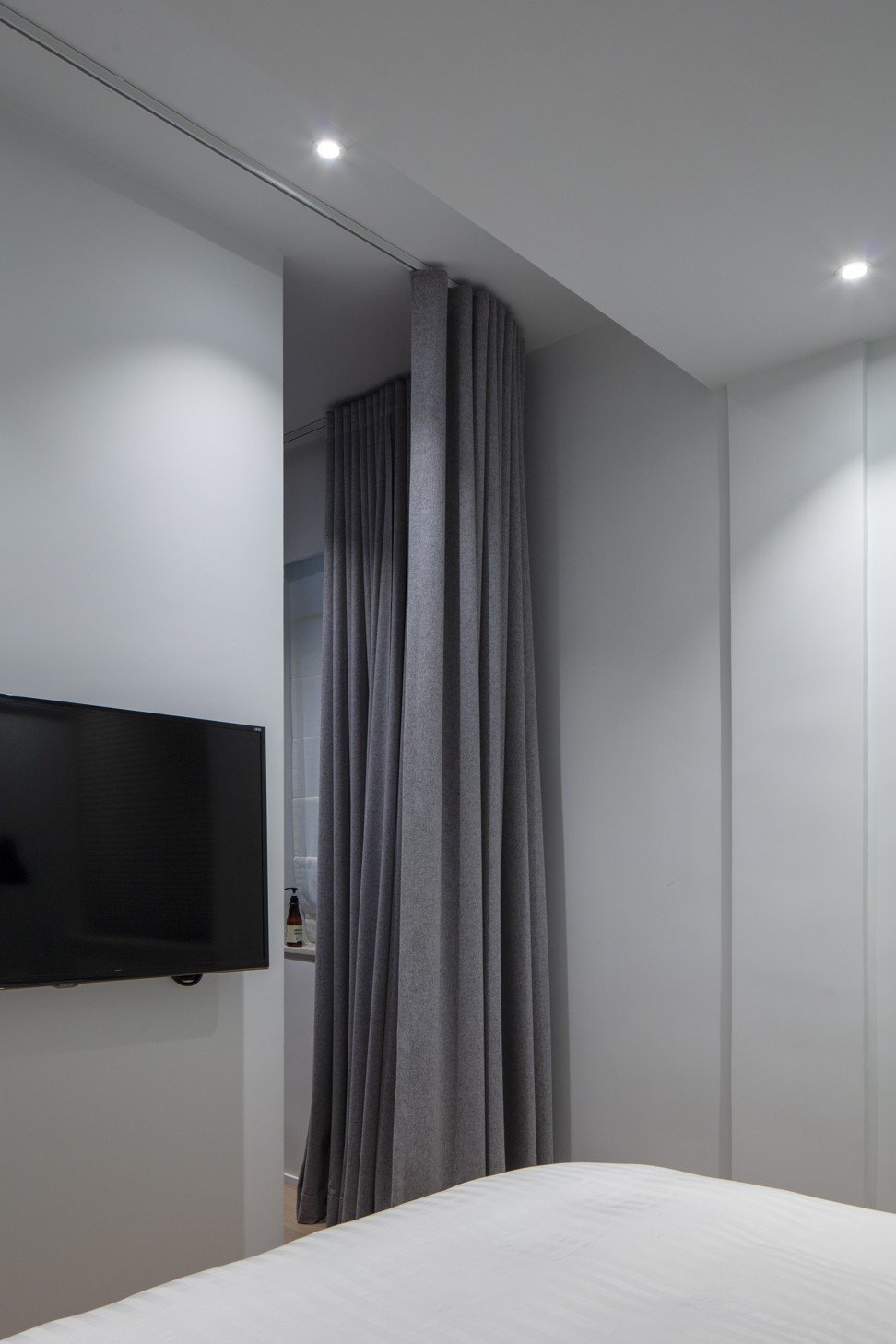 To ensure their clients’ sitting room encouraged conversation, Bean Buro installed the flat’s sole television in the bedroom. A curtain used to conceal a walk-in wardrobe can be pulled across to hide the screen. The curtain (HK$13,000) was made by New Bedford Interiors.