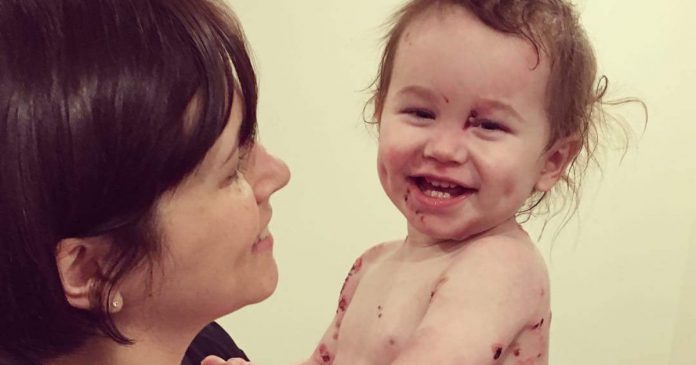 The parents of a child who was born with congenital heart disease and respiratory problems have spoken about how a free home makeover by a group of selfless builders changed their lives.

Nicola Jenkins, 34, and her husband Carl, 33, were sent to Center Parcs for nine days in February along with their daughters Isla, five, and Sadie, two, while a team of tradespeople worked around the clock to completely transform their house – something the family never would have had the time or money to do themselves.

“It gave us a real bit of happiness at a time when things are really tough,” said Nicola, a full-time carer for youngest daughter Sadie, who has multiple illnesses.

At just four weeks old Sadie had to have open heart surgery and at eight weeks she needed a tracheostomy (an opening created in the front of the neck) to help her breathe properly.

She has also been diagnosed with Pierre Robin sequence, a set of abnormalities affecting the head and face, which often includes a small lower jaw and a tongue that is further back than normal, causing eating and breathing difficulties. Doctors have said Sadie’s combination of conditions is so rare, no other child in the UK is thought to live with them.

“She’s fed through a tube in her stomach at the moment,” mum Nicola, from Hoddeston, Hertfordshire, told HuffPost UK.

The group who transformed their home and garden form part of the Band of Builders. Their mission is to help others in the trade who are going through difficult times. Carl, Sadie’s dad, is a plasterer who became the sole provider for the family after the now two-year-old was born.

When the Beast from the East blanketed the UK in a thick sheet of snow, the group of builders were mid-way through their work: installing a downstairs toilet in the family home, replacing their boiler, renovating the garden, fitting new flooring and painting and decorating the whole house. They also crafted handmade bunkbeds for when Isla and Sadie eventually share a bedroom, and transformed the spare room, installing lots of storage for Sadie’s medical equipment.

Some had travelled across the country to help, using their own money to stay in local hotels and pay for food.

Nicola said the downstairs bathroom was the main priority so carers could always be nearby to Sadie, who requires 24/7 care and whose cot is in the dining room. “We didn’t have a downstairs toilet for them, so in the night if they needed to go to the toilet they’d have to leave Sadie [to go upstairs] which is really dangerous,” she explained.

Nicola estimates it would have cost about £50,000 for materials and manpower – maybe even more. “We would never have that amount of money,” she said. “My husband had to have a lot of time off work with Sadie being at Great Ormond Street, so money is tight. They completely transformed the house and our lives.”

Peter Whiter, a plasterer and decorator from Rainham, Essex, was nominated to be the Band of Builders project lead for the renovation. He met with the family to discuss what they needed and then spent six weeks, in the evenings after work, planning the redesign of their house. He then took a week off to carry out the work – sometimes decorating until 3am to make sure the job was done.

Revealing why he did it, he said: “Just to watch the children’s faces come alive and see how it’s changed the Jenkins family’s life – it’s a special thing. You’ll never get a feeling like it, you can’t buy it.”

The Band of Builders are currently helping the family of a toddler born with an incurable skin condition. Pippa Atkinson has epidermolysis bullosa, which means she gets 60-200 blisters a day that need to be lanced. At just two years old she has to take morphine daily and sometimes sedatives to deal with the pain.

The group of tradespeople fitted a state-of-the-art bathroom in the family’s home with a special hydrotherapy bath, which has jets that gently exfoliate Pippa’s skin.

Her dad Damian Atkinson, a carpenter, had already started building an extension at the back of the house in Ponthir, Wales, however the group of builders took over and finished the roof.

Pippa’s mum Rhiannon said the work they’ve done has saved the family £8,000, which they can now spend on other things.

“We’re all so grateful and excited that these guys are travelling from all over the country to help us,” she said. “We feel blessed. Pippa’s oblivious to it all at the moment but one day she’ll be able to look back and see all the people who went out of their way to help her.”

HumanKind is HuffPost’s celebration of kindness, featuring people who do incredible things for others or the planet – transforming lives through small but significant acts. Get involved by joining us on Facebook or telling us about the people who you think deserve recognition for their kind works. You can nominate them here or share your personal story by emailing [email protected]