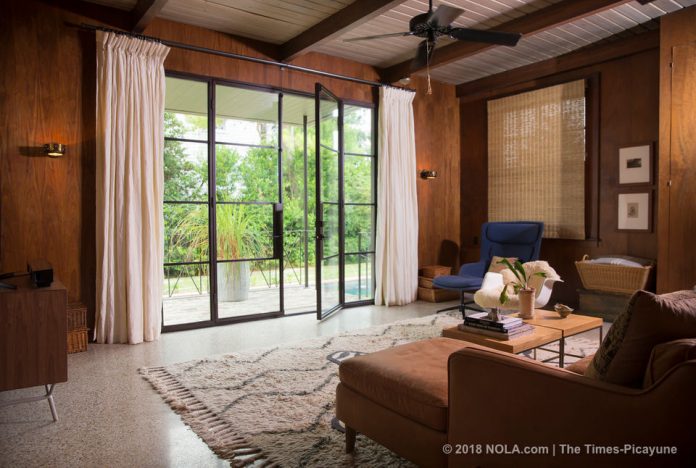 Lee Woolfolk passed down many qualities to her youngest daughter, Lisa Woolfolk — a passion for making art, a creative eye for home renovation and a love for their Lowerline Street home, an 1880s-era four-bay shotgun double that has been in the Woolfolk family for more than 70 years.

“I loved it so much because my mother loved it,” Lisa said. “She had moved around so much as a young girl and to have a home that was so special to her … she never wanted to leave.”

Lee, and her husband, John Woolfolk, would give their three children — John, Julie and Lisa — an idyllic childhood. “It was very ‘Ozzy and Harriet,'” Lisa says.

For Lisa, who was born in 1956, her childhood would all take place in the house on Lowerline Street that her parents purchased in 1947. The listing price at the time was $16,000.

Much has changed in 70 years. Lisa’s parents have both passed away: John in 2000 and Lee in 2014. After her mother’s death, the house was passed down to Lisa, who now lives there with her husband, Martin Butirich, and their two dogs, Juju and Pepe.

“When my mother died, I was like, ‘Well, I want it.’ I just couldn’t imagine somebody else having it,” Lisa said. “I had such good memories.”

Shortly after taking the reins of the home, Lisa and Martin started a major renovation, taking down walls in some places to create a more open flow from living to dining to kitchen, and putting up walls in others to create privacy for a master suite. They’ve created an inviting home where they often host Lisa’s two adult sons and three grandchildren.

While a dramatic undertaking, Lisa’s renovation of her childhood home feels like a gentle and loving nod to the history of the house and to what her parents had started with their own renovation in 1952.

John and Lee Woolfolk purchased the property with Lee’s mother and stepfather, who would live on the other side of the double until 1952. When they moved out, Lee and John started a renovation to turn the shotgun double into a single-family home. At the time, they had two children, John and Julie.

Signs from that first renovation still exist. In the large living room at the front of the house, marks on the wood floor show where pocket doors once opened and closed, separating the now wide-open living space.

“My mother, when they renovated, she took the pocket doors and put them up on the wall, which I always thought was something very creative for somebody in the early ’50s,” Lisa said. “She had some really great ideas.”

The doors act as a focal point between two fireplaces, and bookshelves built around the doors store Lisa’s mother’s collection of vintage books.

Reading was just one of Lee’s many interests; others included playing piano, golfing, writing and painting. “She was a spitfire, too,” Lisa says, “till the day she died.”

A few years after the 1952 renovation, Lee and John added a new addition off of the kitchen, so John and Julie would have a playroom. The new den had wood paneling recouped from the St. Charles Hotel and a terrazzo floor.

Lisa, a decade younger than her siblings, was born shortly after. A ping pong table was moved out, and the new addition became the epicenter of family activity.

Lisa would eat many meals while sitting at a fold-up counter at a pass-through opening between the den and the kitchen. The den was also where the Christmas tree would go, and her mother would line up presents above a window.

Many of Lisa’s earliest memories have faded, but family heirlooms serve as physical reminders of the past — a chifforobe, now in Lisa’s master suite, that once held her father’s Navy gear up in the attic; a Victorian bed her father was born in, that still wears Katrina’s watermarks; a small oil painting of the house Lisa’s mother did, that now sits on the windowsill in the master bath.

Mixed in with the meaningful family treasures and more traditional pieces from her parents’ and grandparents’ eras, are some more modern pieces that Lisa has collected — an Eames plastic rocker, a Maya Lin stool, Thonet dining chairs — and recently purchased pieces, like a white leather sofa from Ikea. It’s a stylish mix that feels easy, with each piece given the room to breathe against the backdrop of Lisa and Martin’s open and airy renovation.

While Lisa and Martin had done renovations before, this time was different. They felt empowered to make things exactly to their liking, while also being influenced by the personal significance of the home.

“I think you respect things a little more. We made sure that we reused everything. If we took out a door, we used it somewhere else. We didn’t change any hardware.” Lisa said.

The centerpiece of their renovation is the kitchen, where Lisa and Martin took extra care to design a space that felt contemporary but also respectful of an 1880s home. Horizontal pine tongue-and-groove boards act as a backdrop for the space, a delicate mix of old and new.

New Shaker-style cabinetry adjoins with newly exposed brick and a worn 15-drawer vintage French cabinet. Above the lower cabinetry is a mix of a few open shelves, a dark gray cabinet with glass front sliding doors that Martin made and an oversized oven hood covered in the horizontal boards.

Carrara marble countertops flank a 1930s Chamber stove and complement the stainless steel countertop on the island, where contemporary lucite bar stools provide seating. There’s an industrial touch as well: A metal duct pipe sweeps down from the ceiling and over to the den to provide air conditioning.

The former kitchen pass-through has been turned into a door frame opening to the den, where one major change was all it needed to be transformed. A large iron-frame, glass-front double door was added to the wall and now provides natural light that spills well beyond the room, as well as a great view of the pool.

While the view has improved, the den remains mostly the same. On the wall are two blueprints of the 1952 renovation that Lisa found just recently in a drawer. The terrazzo floors were brightened up with a good cleaning.

“The terrazzo floor, even though it has a crack in it, we just wanted it to look like we lived here,” Lisa said, “not be brand new and perfect because it’s never going to be.”

The other major part of the renovation was at the front of the house where Lisa and Martin closed off a hallway to create a master suite. The master bathroom was completely revamped. Horizontal pine boards mix with large modern subway tiles in the shower and patterned cement tiles on the floor.

A bedroom between the bathroom and the master bedroom was used to create two closets. A window in Lisa’s closet still has old blinds that cover only half of the window. A canvas Lisa painted covers the other half. This is where her parents had put their first air conditioning unit when they brought Lisa home from the hospital in 1956 and used this room as her nursery.

“They just had window units. My poor mother, she hated it. She was always hot. Always,” Lisa says. “So a lot of this, I’m like ‘you know Mom, I finally did this for you.'”

One last piece of the renovation was a half-bath, where Lisa veered away from her more neutral palette and created a dramatic space with olive green floors and Hunt Slonem bunny wallpaper.

The renovation, which started in December 2015, was mostly concluded by August 2016, when Lisa and Martin moved in.

“We’re really happy with the way it came out. We just love it. We haven’t even traveled,” Lisa said. “We just like it here.”

A door to the past

In a guest bedroom at the back of the house is a door frame that is a bit shorter than the others in the house. This one is the product of a 1960s renovation Lisa’s mother did to add a bathroom and closet to Lisa’s bedroom.

A door here leads to an untouched part of the house — an apartment that feels like a step back in time, especially for Lisa, who remembers when her father’s mother, Audy, lived there in the ’60s. This is where memories hit Lisa the most.

On Saturday nights while her parents went out for dinner, Lisa would eat meals with her grandmother in the kitchen. On a little covered porch, Audy would nervously watch Lisa climb trees in the backyard.

After Audy passed away, Lisa’s mother turned the kitchen into her art studio.

“She would wake me up on Saturdays to come in here and sit,” Lisa said. “Not what I wanted to do.”

A portrait of a teenage Lisa wearing a yellow hat hangs on the wall, along with another her mother painted of her when they were at the beach — ocean waves in the distance and Lisa wearing a striped shirt, her face blurry because her mother never finished it.

Her mother’s art supplies are still here, and the space is now Lisa’s art studio. A new window will be added, but that’s all Lisa plans to do.

“I don’t want to do anything. It’s so special the way it is — falling apart and dirty,” Lisa says.

Tacked up on the wall are collages Lisa has been working on, along with colorful children’s art that her grandchildren made.

Lisa has a fourth grandchild on the way. She babysits on Tuesdays, and her grandchildren take swim lessons in her pool. So while the Woolfolk family has certainly changed in 70 years, the focus of the home on Lowerline Street is still family.

“We have great memories. So the fact that we get to continue it now with grandchildren, it’s so nice.”