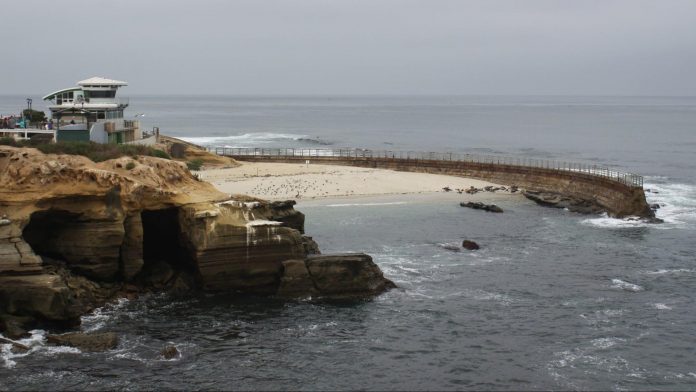 After two laborious years, Diane Kane held the completed nomination form for adding La Jolla’s Children’s Pool to the National Register of Historic Places in her hands, minutes before putting it in the mail bound for the State Office of Historic Preservation in Sacramento on May 7.

At 103 pages of findings and photos, she sighed and joked that the project “is a master’s thesis” and she feels “free” now that it’s done. This fall is the earliest time Kane could get an answer about whether the 1931 La Jolla landmark will be historically designated, but more likely the decision will come early next year.

The benefit for the Children’s Pool, should it be listed, she said is: “It would keep that property looking like we all enjoy it … rather than having to bring everything up to modern code. With the designation, it doesn’t mean you can’t touch it, it means you have to touch it with care. If a feature needs to undergo construction or renovation, engineers are required to bring it up to code; but if it’s designated historic, they weigh the safety factors with the historic factors. They try to find a balance between the two, so they maintain the character, but still keep people safe. The thinking is, just because something doesn’t meet current code, doesn’t mean it is inherently unsafe.”

Noting the Children’s Pool is almost 100 years old, Kane opined that some repair work might be in its future, so she began the designation process with the La Jolla Parks & Beaches advisory group as the project’s co-sponsor.

La Jolla Parks & Beaches chair Ann Dynes explained: “The Children’s Pool is already historic in the minds of the members of La Jolla Parks & Beaches, Inc. We hope that by co-sponsoring this effort, its much-needed repairs will qualify for historic preservation funding, and it will be clear that applicable building standards for those repairs shall respect its historicity. The City Parks & Recreation Department has no funding for what will be expensive repairs to both the retaining wall and the aging breakwater (sea-wall).”

A nomination form, essentially, asks two questions of a property: 1) What is it and 2) Why is it historic?

But for Kane and the Children’s Pool, neither proved to be as simple as they seem.

Funded by La Jolla benefactress Ellen Browning Scripps, the Children’s Pool was constructed at 850 Coast Blvd. by way of a breakwater and stairs, and opened in 1931 to provide a wave-free shoreline for children experiencing the ocean for the first time.

“What people thought originally was that Children’s Pool was just the breakwater and the stairs,” she said. “The interesting thing is that it is much bigger than anyone realized.”

“The real surprise was looking at the engineer (Hiram Savage’s) drawings and what was on the bluff-top,” she said. “Children’s Pool technically started on the curb across the street from Casa de Mañana and included all the landscaping, what is now the Children’s Pool Plaza; parking, where it is today; a walkway; a ramp to access the top of the breakwater; steps; and mentions of a restroom where the green belvedere is now on the north side of the area.”

There are also sea caves in the identified in the drawings that later had to be grouted with concrete so water wouldn’t get in and erode the bluffs.

Using a lines-of-force equation, Mangano was able to determine the appropriate amount of the reef to include, to keep the breakwater safe.

All said, according to the report: “Natural features within the district boundaries that constitute its setting include: 1) the top and face of the coastal sandstone bluff that encompasses the sea caves, anchors the stairways and supports bluff top improvements; 2) a sandstone reef that anchors the foundations of the engineered breakwater; 3) a small, shallow dredged marine pool between the bluffs and reef; and, 4) a sandy man-made beach.”

A year into the process, Kane drafted a version of her findings and put it out for a 30-day review. After the community supplied comments and suggestions, another version was drafted.

Why is it historic?

In the meantime, Kane focused on the second question — why is it historic? — which also proved to be a challenging one to answer.

Kane found the first three would “certainly” apply. Criterion A, because of Children’s Pool’s role in the beach life of La Jolla, Criterion B for its connection to Ellen Browning Scripps, and Criterion C because the esteemed team of William Templeton Johnson and Hiram Savage, and the fact that breakwaters are not very common.

She skipped Criterion A to focus on more concrete options.

When she called the State office of historic preservation for an initial review, the reviewer asked her, regarding Criterion B, “Who is Ellen Browning Scripps?”

Kane: “I said, ‘you mean the fairy godmother of La Jolla?! Saint Ellen?’ ”

And the reviewer looked at Kane and said, “What did she do?”

Kane explained that Ellen Browning Scripps was a philanthropist who paid for the breakwater wall.

“That won’t get you on the register,” the person told Kane.

So relying on Criterion C, she said they would focus on those that were involved in the design and the fact that similar pools are rare in the United States.

“Ellen got the idea for the breakwater from a public bathing pool in Old Lyme England, where she grew up,” she said. “It was a quaint seaside town for the well-to-do and they had a breakwater similar to this that she knew of growing up. It turns out, Ellen was from the previous century, so by the time we started doing this, people were discovering and creating public swimming pools. So in looking at this project, we had to look at how many of these things do we have?”

Further, in looking at the designers behind Children’s Pool, Kane said Hiram Savage was a hydrological engineer and he designed the City’s water supply and that “We would have no water if it weren’t for Hiram Savage.”

Also, William Templeton Johnson designed the simple, concrete stairway. “He was the go-to guy for big projects … and was at the top of his career,” Kane said. “He was doing a lot of Spanish style work, and to me, the stairs’ design was very Roman. But in the context of the pool, the Children’s Pool was very modern and streamlined for the time. And we don’t have a lot of ‘modern’ stuff from that period.”

Once the Office of Historic Preservation receives the report, a reviewer will be assigned to it, who will determine whether revisions need to be made or if it will be heard at the State Historic Resources Commission meeting. The Commission will decide whether to forward the report to another board that reviews items for the National Register. At that point, commissioners in Washington will review it and make findings.

He told La Jolla Light, “The National Register of Historic Places is the official list of America’s historic resources, and is administered by the National Park Service. The Children’s Pool attracted national attention for its engineering and design when it was first built, and both have stood the test of time. Further, the Children’s Pool was constructed under the patronage and advocacy of Ellen Browning Scripps, who was a national figure during the period, and it was the last of her many gifts to La Jolla before her death in 1932. So it is fitting that the Children’s Pool be listed on the National Register. Such designations recognize people’s connections to old places, and help develop a sense of community identity, memory, and belonging.”