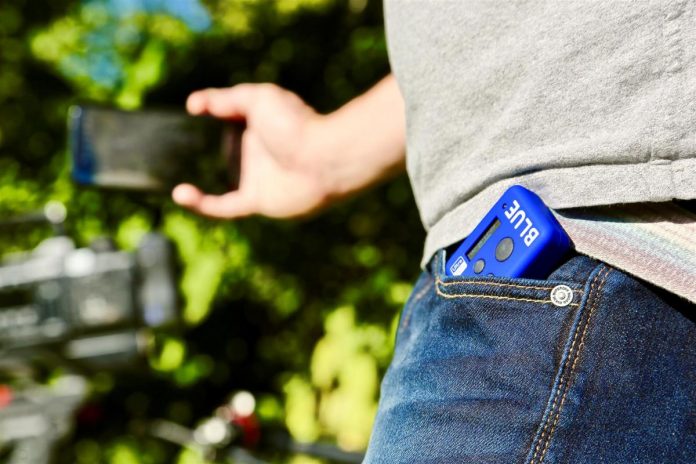 Advancements in camera and sound recording technology mean smaller, more affordable consumer devices, such as the iPhone, are now routinely used to capture additional content on professional shoots. The ability to accurately combine these creative camera angles with content from professional cameras and separately recorded sound is key to creating compelling, multidimensional content efficiently. However, without the benefit of extremely precise and robust external timecode, editing together footage from multiple iPhone devices is a time-consuming, manual process.

The latest releases of the MAVIS and MetaRecorder apps include compatibility with the new Timecode Systems protocol. Once these apps are connected to an UltraSync BLUE, timecode can be transmitted wirelessly over Bluetooth® to the iPhone, where it is embedded directly into media files generated from video shot on the MAVIS app or sound captured on MetaRecorder.

This allows crews to use one UltraSync BLUE to sync up to four iPhone cameras shooting in close range over Bluetooth. Alternatively, crews can use UltraSync BLUE to sync the iPhone over robust, long-range RF to other camera and audio recorders using Timecode Systems units, or even equipment containing a Timecode Systems OEM sync module (for example, the AtomX® SYNC extension module for the new Atomos Ninja V).

“Imagine you’re out on a reality shoot — there’s a pro camera filming the main content, a sound recordist capturing audio, a DSLR roaming, and GoPros rigged around the set,” said Paul Scurrell, CEO of Timecode Systems Limited. “Sync is under control with Timecode Systems units running on each device. You have a :pulse providing the master timecode from the sound mixer bag, an UltraSync ONE on the big camera, a Ninja V with an AtomX SYNC extension on the DSLR, and SyncBac PROs on the GoPros. Then the director asks for some last-minute additional angles using iPhones. What’s syncing the iPhone? We’re really excited to announce UltraSync BLUE with full compatibility with both the MAVIS professional camera app and Apogee’s MetaRecorder app. It fills a huge gap in the market by allowing us to provide a very accurate, neat, professional solution for crews who find themselves filming with iPhones in this situation.”

MAVIS is a free professional filmmaking camera app for the iPhone. It offers a range of professional-level filming tools (from focus peaking to waveform monitors) that can be purchased in bundles. Once paired with an UltraSync BLUE, the MAVIS timecode bundle is unlocked automatically for free, allowing timecode metadata to be embedded directly into media files generated from video shot on the MAVIS app.

“MAVIS support for UltraSync BLUE means you can literally walk onto set with your iPhone, shoot with MAVIS, and know it is in sync with everything else,” said Patrick Holroyd, CEO and co-founder of MAVIS Broadcast. “By combining the pro-level tools of MAVIS with UltraSync BLUE, we are bringing the outstanding picture quality provided by the iPhone into the professional shooting world.”

MetaRecorder is a two-channel audio recording app from Apogee that allows professional-quality sound to be recorded on an iPhone. It enables audio recording of the highest quality at 24-bit/96kHz and is designed to work seamlessly with Apogee products including MiC+, ONE, and Duet, as well as Apogee co-developed products such as Sennheiser ClipMic digital and MKE 2 digital lavalier microphones. MetaRecorder is free to download, with various in-app options to add features. (These can be added for free if a compatible microphone device is attached.)

“The addition of a timecode workflow to our MetaRecorder 2.0 audio recording app for iOS will be an exciting and valuable feature for our customers,” said Betty Bennett, co-founder and CEO of Apogee Electronics. “Adding accurate timecode metadata to the WAV file opens up huge possibilities for creating a multitrack audio recording that can sync with a multicamera iPhone shoot using the MAVIS camera app or a professional time-coded broadcast or digital movie camera using Timecode Systems’ other wireless sync products. The features of MetaRecorder already offer an intuitive and streamlined workflow for Final Cut Pro® with XML metadata tagging. Adding timecode metadata to our files is another step towards a world of synchronised collaborative content generated from a broad spectrum of creators and devices.”

Timecode Systems is working with other manufacturers and app developers to adopt its patented Bluetooth timing protocol and expand the reach of UltraSync BLUE across a wide range of cameras and sound recorders. Zoom Corporation is working on new releases of H3-VR Handy Recorder and F8n MultiTrack Field Recorder. When released later this year, both of these Zoom sound recorders will have the ability to receive timecode over Bluetooth from UltraSync BLUE.

Timecode Systems is now taking orders for UltraSync BLUE and will be shipping later this month.

More information is available at www.timecodesystems.com.

Timecode Systems designs and manufactures wireless timecode hardware and software sync solutions that make it easier to capture, log, and synchronise content captured during multicamera shoots and 360-degree virtual reality (VR) filming. Regardless of whether filming is on professional camcorders and audio recorders, action cameras, DSLRs, or smartphones, we have innovative products to bring a simple professional workflow across all devices. We are the ‘glue’ to a changing world of truly collaborative multicamera video content — for broadcast, movie, amateur filmmakers, and social media channels.

More information about Timecode Systems can be found at www.timecodesystems.com.

The Bluetooth® word mark and logos are registered trademarks owned by Bluetooth SIG, Inc. and any use of such marks by Timecode Systems Limited is under license. Other trademarks and trade names are those of their respective owners.