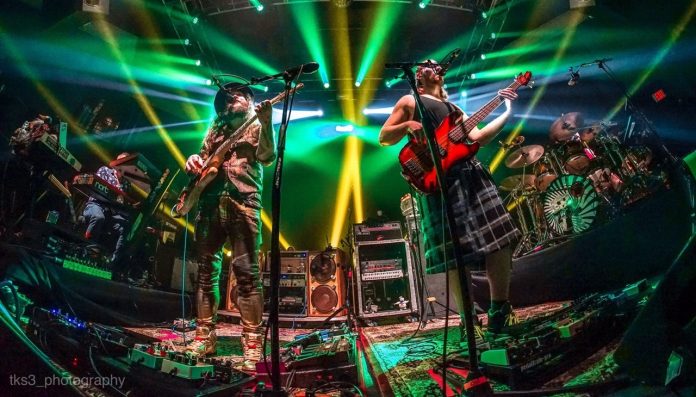 While Twiddle will team with Grateful Dead bassist Phil Lesh for the debut Phiddle performance on Halloween as part of a Phil-O-Ween concert at The Capitol Theatre in Port Chester, New York, the band celebrated the holiday this past weekend. Twiddle worked theme songs from movies and television shows into their concerts at the 9:30 Club in Washington D.C. on Friday and Saturday nights.

Twiddle weaved from originals into popular theme songs throughout the two-night stand in Washington D.C. On Friday, the group kicked off the action with “Nicodemus Portulay” and landed on the theme to the classic horror film Halloween. Twiddle’s “Night At The Movies” also featured music from Raiders Of The Lost Ark, Harry Potter, Jurassic Park, James Bond, Lord Of The Rings and Braveheart. Pigeons Playing Ping Pong guitarist Jeremy Schon joined the quartet for “Apples” as part of the festivities. Listen to a crispy soundboard matrix recording of Twiddle’s “Night At The Movies” thanks to Sam Johnson and Edmund Edwards:

Saturday’s concert saw Twiddle move from their own material to television theme songs. After opening with “Jamflowman,” the group jammed on the Game Of Thrones theme song within “Carter Candlestick.” Later, Twiddle covered the theme song from Aqua Teen Hunger Force out of “Latin Tang.” The band also fit music from The Simpsons within “White Light” and Duck Tales within “Gatsby The Great.”