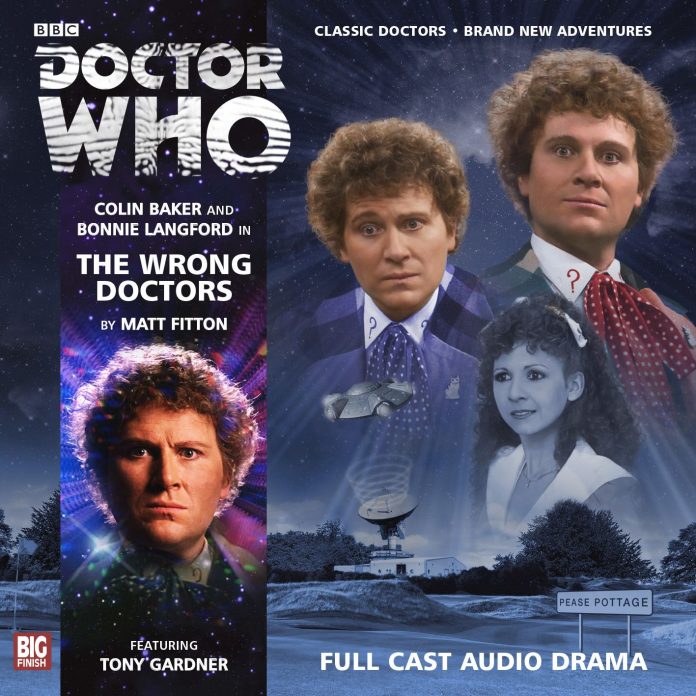 In Pease Pottage, the Sixth Doctor meets someone he never wanted to meet…his own younger self. Find out how the two get along in our review for The Wrong Doctors.

Every month, Big Finish chooses a story to put on sale for the whole month. For August, it’s The Wrong Doctors. And it’s a story I love so much that I need to let you know exactly why you should get it, especially for the bargain price it is right now.

The story begins with the Sixth Doctor, alone and missing his previous companion Evelyn Smythe, eager to meet his future companion Mel. So he heads off to her home village, Pease Pottage, for their first meeting.

However, he’s not the only Doctor to arrive there. Following his recent trial, his younger, more arrogant self has arrived to drop an older Mel home. But there’s a slight problem: he’s arrived far too early, before Mel has even met the Doctor, while a younger version of her is still living in Pease Pottage.

What’s really fantastic about this story is the idea of including two Sixth Doctors, but at different points in their lifetimes. So one’s essentially from his TV era, when he’s still pompous and arrogant in this incarnation. The other’s from much later, after his previous companion had helped him to mature.

This is a brilliant way of showing just how much Six changed because of the audios. Across his TV stories, he was loud, arrogant and pompous.

In his audios, while he still has some of those faults, they’re considerably reduced. He’s also kinder and more charming, too. So unsurprisingly, even the older Six finds his younger self difficult to deal with.

Colin Baker is absolutely fantastic as the two Sixth Doctors. You can obviously tell that they’re essentially the same person. But you can also hear the clear difference between the two, as well. The Sixth Doctor definitely isn’t the man he once was, so it’s great to really hear that when he meets his younger self. 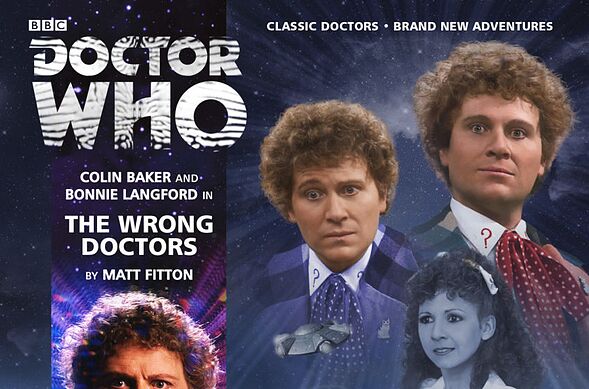 Matt Fitton does a great job at writing not just for the two Sixth Doctors and highlighting their strengths and faults. He also explores what makes Mel Bush such a great character (at least, when handled right).

We arguably didn’t see too much of that in her television stories. But in The Wrong Doctors, the story explores her intelligence, her brilliant memory, and what makes her so special. Bonnie Langford is great at portraying all of these different aspects to her character.

The Wrong Doctors is also a very clever script, too. There are real complexities with time in this story, and not solely because of the timey-wimeyness with the two Sixes. The Wrong Doctors is a story that explores the whole history of Pease Pottage in a short space of time.

More from Doctor Who Watch

If I’m honest, it took me a couple of re-listens to truly grasp everything. And that’s one more reason why The Wrong Doctors is worth checking out now: value for money. Buying Big Finish audios can be expensive, so if you do rarely buy them, then the ones you do get should be worth a re-listen, at least.

But even if you completely grasp The Wrong Doctors on the first listen, I still think it’s a story you’ll want to re-listen to. Filled with not just a clever plot, but also well-written characters and a great exploration of the Sixth Doctor’s development, The Wrong Doctors is an excellent celebration of two characters who didn’t have much luck on TV, but truly shine on audio. Highly recommended.

You can purchase The Wrong Doctors directly from Big Finish’s website here.

Next: Series Eleven: What promotion needs to focus on most of all

Have you listened to The Wrong Doctors? Are you a fan of the Sixth? Should the Doctor bump into himself more often, even in the same incarnation? Let us know in the comments below.