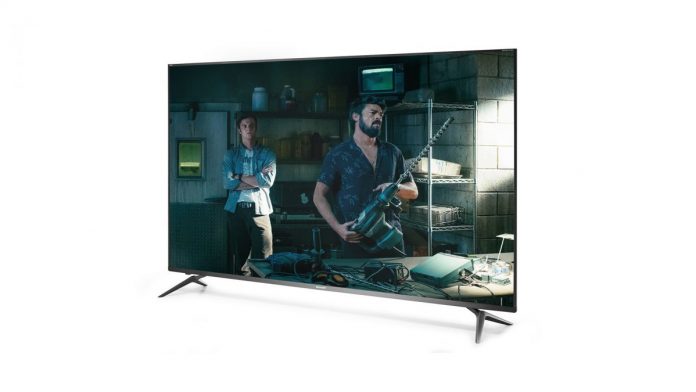 The 70in Sharp LC-70UI9362K is the first Sharp TV we’ve reviewed for some time. It’s not that we’ve been remiss, but because the Japanese manufacturer has seen hard times of late.

In 2012, poor financial results necessitated the introduction of a series of measures to save the company, including the sale of rights to manufacture and retail TVs under the Sharp name in Europe and the Americas. Two years ago, Sharp re-acquired those rights and the LC-70UI9362K represents its first attempt to get a foothold back in the market.

The previous Sharp television we reviewed back in 2012 was another 70in model costing £2,500, but it was a completely different proposition to the telly on review here. The LC-70UI9362K is an altogether more budget proposition. With 4K resolution, HDR technology and a set of Harman Kardon speakers, it’s set to have wallets a-flutter at well under £1000 for a 70in panel. Too good to be true? We pick up the remote and switch it on…

The Sharp LC-70UI9362K is a good looking TV. It’s not fancy, just sleek and modern; impressively thin at the top and sticking out about 8cm towards the bottom. The bezel is a tasteful 12mm. It stands 97cm tall and 156cm wide on two separate feet that require a fairly large surface around 140cm wide to accommodate it.

Around the back and to the sides you’ll find an array of sockets that include aerial (for the on board Freeview HD tuner), headphone-out, optical-out, three HDMIs and three USBs.

There’s also an SD card reader if you want to view photos or videos straight from your camera, or you can beam content direct from an Android mobile or tablet that supports Miracast technology. In terms of apps, you get Netflix in 4K HDR, YouTube, Rakuten, iPlayer, ITV Hub, 4oD and My5, but no access to a number of big hitters, including Google Play Movies, Amazon Prime Video or Now TV. Unsurprisingly, given its current exclusivity to Samsung, the iTunes Movies app is missing from this Sharp, too. It’s not Airplay-enables, either.

Net+ is Sharp’s smart platform, where you can find apps that aren’t already pre-installed, and under the Movies and Videos tabs you’ll also find on-demand recommendations pulled in from a host of different video apps.

The remote control is maybe a touch lighter in the hand than we’d like, but has all the buttons, functionality and shortcuts you need to skip a few menus and get straight to what you’re after. These include dedicated buttons for YouTube and Netflix.

One thing we like about the Sharp LC-70UI9362K is its out-of-the-box picture settings. If you take it out of the box, plug in your cables and switch it on, you’ll actually be fairly close to getting its optimum performance.

Bear in mind that although the TV does support HDR10, the HDR setting needs to be enabled manually. Head to Settings, then System, HDMI Settings and switch HDMI 2.0 Format to ‘Enhanced’. If you haven’t done that, you won’t be watching in HDR and the picture will suffer greatly for colour as well as contrast.

Once enabled, what we see is initially impressive. Watching Wonder Woman in 4K HDR, it’s clear that this TV punches way above its price tag. As the camera sweeps across the paradise island of Themyscira, there’s a richness of colour throughout the palette. The sea is Ionian blue, the vegetation a lush green and the golds, reds and browns of the Amazonian armour have all the tonal subtlety we could wish for.

Dark details are also generally well attuned. There’s good texture to the waves of Gal Gadot’s raven hair and there’s good differentiation between the black horses and their dark tack. It’s easy to appreciate the different thickness of the hair at the horse’s flank and the nose.

Contrast is impressive too, whether in the clouds or the complex shades of brown and blonde highlights in Hippolyta’s hair. The freckles of her sun-kissed skin, the imperfections of ageing and her battle scars are all rendered in good 4K detail. In straightforward, well lit scenes this Sharp TV delivers, but once we head to darker scenes or ones with complex movement, then the cracks begin to show.

Blacks really are a problem, even given the low price tag. During the moonlit scene as Diana sails away from Themyscira, black cloaks and dark waves are mostly a selection of greys, but the real crime is that the uneven backlight bleeds through at the corners of the picture.

You can lessen the effect by turning down the backlight intensity, but colour vibrancy suffers and the bleed effect never really goes. It isn’t particularly noticeable during bright scenes, but the light bleeding in at the corners is off-putting, and we’re disappointed to see it on this Sharp.

Another issue is with how this set handles motion. Sharp’s ActiveMotion 800 is similar to other motion processing technology, in that it’s supposed to sharpen moving pictures by creating additional frames and inserting them between those delivered by the source material.

Unfortunately, the end product still needs a bit of work. All that 4K detail begins to blur and the edges of objects suffer from significant judder as they move across the screen. There’s also an issue with fine detail when watching films with any graininess to them. Even with the picture enhancement settings switched off, the Sharp over-processes the image, causing the grain to shimmer.

It’s less distracting in darker scenes, but it can be noticeable in the close-ups when watching this kind of content. Even in 4K, it’s easily evident as Hippolyta and her sister discuss whether or not Diana should be trained.

That shimmer can be even more pronounced when dropping down in resolution. Bad Times At The El Royale in Full HD is supposed to be a grainy film and the shimmer becomes incredibly distracting as the bellboy greets the hotel guests at reception. Faces, clothing and walls all suffer.

However, this TV is far from a dead loss when it comes to upscaling. Watching 22 Jump Street in Full HD and everything looks fine. There’s no graininess getting in the way and faces look detailed and smooth. How much you get out of this set will depend on what content you watch.

But once down into the standard definition footage of live TV, it can be quite unbearable. The relatively low pixel density here means there are a lot of large gaps for Sharp’s Ace Pro Ultra Engine to fill in. While people in close-up are good, faces that are smaller on the screen, either in wide shots or the background, look rough and pixelated. If you are determined to watch SD content on this set, don’t to sit too close.

One big selling point of this TV is that it comes with Harman Kardon speakers, however, we’re not particularly impressed with the sound served up here.

In terms of its sonic staging, the audio seems very much centred around the TV itself. Wonder Woman’s machine gun-peppered advance across no-man’s land is distinctly one-dimensional, when it should feel like the bullets are coming from all angles.

Tonally, this set is not the best either. The mid-range notes are okay, with decent clarity to the vocals, but there’s a definite absence of bass to the shells and grenades on the Western Front as Wonder Woman and her team take on the Germans.

Watching Kingsman Golden Circle, it’s clear that the dynamic range on offer is limited. When Eggsy and Merlin meet in the pouring rain, there’s little distinction between the drops, and the sound of the downpour is more of a dishwater blur. There are some presets to play with, but the Standard mode is still the only one we think is worth using.

There are many problems with this TV, both in terms of the picture and sound. With upscaling and scenes that require finesse, it tends to underperform. But it is a 4K HDR TV and there’s just about enough fun factor to make UHD viewing worthwhile, provided you sit at a reasonable distance.

More to the point, though, there is no other TV around that’s going to give you this much screen for so little money. An older, cheaper 65in set might give you a better picture, but if you’re determined to go for a 70in TV on a budget and are prepared to accept a number of flaws to get it, then you may have found what you’re looking for.