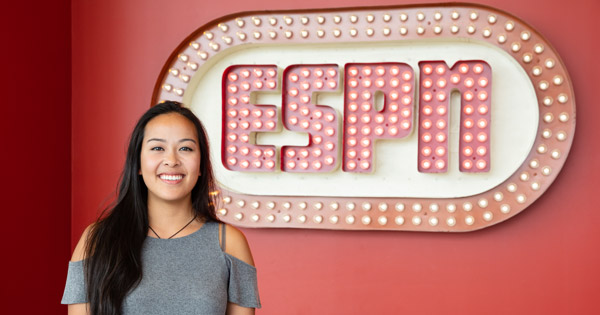 Tami Nguyen spent this summer interning in production operations at Bristol, Conn.–based ESPN, the global pay television sports channel owned by the Walt Disney Company and Hearst Communications. It’s the latest in the recent College of Communication film and television major’s string of high-profile gigs. As an undergrad, Nguyen (COM’18) was a web production intern for Live Nation Entertainment and worked the control room operations at TD Garden and Agganis Arena. As a member of BUTV10, she shot Terrier basketball games. She also spent three seasons filming game footage for the Boston Bruins, the Boston Celtics, and BU men’s ice hockey, and she attended the BU Los Angeles Internship program (BU in LA). And if that weren’t enough, she also has a side business managing social media and shooting photography and videography for clients involved in Boston’s nightlife scene.

We spoke with Nguyen about her summer working in ESPN’s control room and her advice for others looking for a similar internship.

Briefly describe the internship and your duties.

I was one of three interns within Production Operations at ESPN, and my official title was production operations intern. I was placed into the Production Control Room group, where we essentially took little puzzle pieces and put them together for television. This included adding cuts and transitions from one camera shot to another, mixing audio levels, incorporating game highlights, and more. My supervisor liked to phrase it: “We take content and put the bling on it for TV.”

I helped produce shows and live games and mix audio to add Spanish voice-overs. I also was trained in EVS and Dreamcatcher, which are used to produce game replays and in building video packages. I learned how to properly mix audio and the basics of cutting TV shows and using Quantel to edit video clips.

My application process was different from that of other interns. As a student member of the Asian American Journalists Association [AAJA], I was exposed to a few scholarship and internship opportunities. I applied to three and within a couple of months, I learned I was the recipient of the 2018 Al Young Sports Journalism Scholarship, which provided $2,000 towards tuition, the ESPN internship, and a Columbia School of Journalism Fellowship. The Columbia fellowship funded my trip earlier this month to the AAJA Convention in Houston.

For the internship, I submitted my résumé, work samples, and a cover letter. Several weeks later I received a phone call from a Disney recruiter, who informed me that although I had applied for the editorial internship, I might be a better fit for Production Operations. She sent my documents to both departments and I had several phone interviews. I ended up getting placed in Prod Ops, which has been one of my favorite internship experiences.

Describe a typical day on the job.

Most days I came in at 8 am. I added Spanish voice-overs to existing shows. I learned how to use the video switcher and audio board and how to record and edit video clips. I met with new trainers every day, which definitely helped me network. There was also free time, when I could observe other departments at ESPN, like the magazine or film departments.

The internship was what I made of it.

Being at ESPN helped me improve my networking skills and fine-tune my technical skills in producing television. I was not afraid of cold emailing or meeting people, including the new president and his team or the director of photography for ESPN the Magazine. I also got more comfortable running an audio board and doing basic replay. I see myself pursuing this direction further to better my skill sets back home in Boston.

What did you learn about the real world?

Working in television means working nights, weekends, and holidays. I also learned there’s more to television than just what is on camera. I found myself being very interested in ESPN the Magazine and the marketing side of ESPN. I truly see myself in helping a company grow, more so than running a camera.

What was the biggest mistake you made?

The most frustrating thing?

Truthfully, the most frustrating thing was not being close to home. BU was only 30 minutes away from home for me. At ESPN I was two hours away from home, and not really involved in family matters, including my oldest sister’s run for state representative in Massachusetts.

I was able to operate the video and audio boards on my own within three weeks. I learned that I adapt fast and ask a lot of questions. And I was able to help produce a show within a few weeks.

The most important thing you took away from the internship?

I learned that community matters. ESPN was one of the most welcoming companies, and it made coming into work more enjoyable. I looked forward to working with certain trainers because they had so much to offer and teach me. A proper learning environment is crucial, and ESPN was very inclusive.

What’s your advice for others seeking a similar internship?

Do not think you are underqualified for a position. I really didn’t know too much about sports, but I knew I wanted to work in a fast-paced environment. When I first came to ESPN, someone told me: “Shoot for the moon and hopefully you land amongst the stars.” Those words have stuck with me.