Home Audio & TV PewDiePie v T-Series: The battle to be king of YouTube 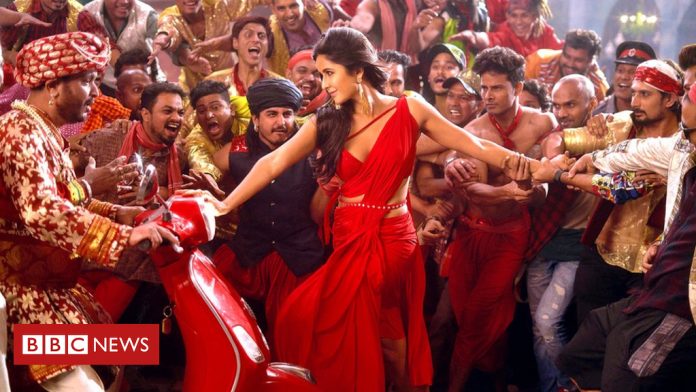 Bhushan Kumar says he hadn’t heard of PewDiePie until a couple of months ago.

That was when the 28-year-old Swede – real name Felix Kjellberg – mounted a challenge to Kumar’s Bollywood music label T-Series, to retain his status as the YouTuber with the most subscribers.

“I am really not bothered about this race. I don’t even know why PewDiePie is taking this so seriously. He’s getting his people to push him, promote him. We are not competing with him,” Kumar told me recently.

PewDiePie, who is the world’s highest-paid YouTube star, posts video game commentaries and vlogs on his eight-year-old channel. He has courted controversy by releasing videos containing Nazi references or anti-Semitic imagery, and apologised for using a racist slur during a video live stream.

T-Series is a 35-year-old Mumbai-based music label and film production company. Some 15% of the firm’s revenues of $100m come from its YouTube channel, which is run by 13 people out of the firm’s seven-storey headquarters in the heart of Mumbai’s entertainment district.

Both PewDiePie and T-Series have more than 75 million subscribers each on YouTube. That’s more than double the followers Ed Sheeran and Taylor Swift have on the video sharing platform, which has nearly two billion monthly users worldwide.

PewDiePie is gaining an average of 144,656 subscribers per day while T-Series is averaging 157,656, according to website SocialBlade.

Fans of PewDiePie have hacked tens of thousands of printers to print out messages and posters urging people to subscribe to him. Reports say they also hacked the Wall Street Journal with a note that the newspaper would be sponsoring PewDiePie in an attempt to beat T-Series in the race for subscribers.

The Swedish YouTuber’s fans have set up online petitions demanding the removal of the Indian label from YouTube “as it is a threat to individual creators” and described it as a “monolithic dictatorship of YouTube analytics” and a “greedy corporation”.

The kerfuffle over amassing followers on the Google-owned video sharing platform appears to have, at once, amused and befuddled executives at T-Series.

“I have not told my artists to put up supportive messages to boost our followers on our channel. We are not in that game,” says Kumar, a boyish-looking second-generation music baron.

“Thanks to this controversy, our label has now global eyeballs. Everybody’s approaching us. International artists want to work with us. Forget about the rankings – our reach is the highest,” he says.

And the dust up with PewDiePie couldn’t have possibly come for a better time for the label.

Next month, its YouTube channel will launch a music video of Guru Randhawa, one of its most popular singers, featuring the Florida-born rapper Pitbull.

The video – the label routinely spends up to $100,000 to shoot a music video – was shot in Los Angeles and has Randhawa singing a “romantic” Punjabi hip-hop track with Florida-born Pitbull rapping in English. And now, says Kumar, the label is negotiating with a “big international pop star” to do another “romantic fusion” number with a top Indian singer.

Over the years, Kumar claims, his label has launched a number of music stars like Randhawa, whose top three music videos on the channel have already grabbed more than 1.5 billion views. The music videos, which are often shot in foreign locations, feature the singers driving cars like Lamborghinis and slinky models dancing against exotic backgrounds.

The way music is often made at T-Series is a testimony to the label’s nimbleness of operations, and acute sense of the popular zeitgeist.

Twenty-six-year-old Punjab-born Randhawa, for example, will often hum a melody with a hook line and WhatsApp it to Kumar, who often plays the role of the label’s tastemaker.

“If I like the melody, I ask him to send the vocal hook with a beat and a drop,” says Kumar. A drop is a point in a music track when a sudden change of rhythm or bass line occurs.

“So he adds the beat and drop. If that sounds even better than I say, ok let’s go ahead and complete the song. We just have an ear for good music.”

T-Series was launched in 1983 by Kumar’s father, Gulshan, who began life by selling fruit juice before discovering there was a potentially thriving market in recording and selling devotional music. (Kumar was shot dead by assailants outside a temple in suburban Mumbai in 1997.)

According to company executives, Gulshan Kumar had noticed that many ageing Hindu devotees could not read the hymns and chants from holy books because of failing eyesight.

So he hired singers, recorded the chants and sold them as cheap cassettes, at a third of the market price for recorded tapes.

In another stroke of marketing genius, he decided to film major Hindu pilgrimages in India and sell them on VHS tapes and video cassette tapes for people who could not go on or afford the journeys. In less than a decade he had gone from producing devotional music and videos to making film music. The 1990 Bollywood hit Aashiqui (Love) was one of the firm’s first hits.

The label’s digital foray was as unconventional as its debut in music.

After being hit by music piracy at the turn of decade and amid court battles with radio stations and TV channels who were stealing their music for their shows and serials, the label decided to sell music clips for mobile phone ring tones and caller ring-back tones in the country’s growing mobile phone market. Caller ring-back tones – usually bites of songs, movie dialogues or greetings – is the sound that a caller hears while waiting for a phone to be answered.

“When we started some people came to us and said we need 10 bytes of 30 second music from our films for ring tones. In return they gave us 10 mobile phone handsets, which were pretty expensive in those days. We said just take it,” Neeraj Kalyan, the president of the label told me.

Kalyan says he went to a conference in Amsterdam and found out that going digital on YouTube would be “the next big thing”. So on New Year’s day in 2011, the label launched on the video sharing platform with a video from a film called Patiala House.

Seven years on, the label runs 28 channels in at least nine Indian languages on YouTube. These largely offer music videos and audio and video jukeboxes, but that is not all they do.

The channels include buzzing bilingual – Hindi and English – channels for children and health and fitness buffs. Curiously enough there is also a Portuguese cartoon channel for children.

Not surprisingly, T-Series has built up one of the world’s largest song and music video banks. The label has acquired film music and produced its own furiously, building up an enviable store of more than 160,000 songs. The video vault has more than 55,000 music videos. Now the firm aims to become Bollywood’s biggest film production company – it is producing a record 21 films next year.

Drawing on its stores of songs and music videos, and producing new content all the time – “Sometimes we drop two videos a day on our channel,” says Kumar – means that T-Series has become the most watched channel on YouTube. Its videos have been watched more than 55 billion times. More than half of the traffic to the channel comes from India, followed by Pakistan and the Gulf countries.

One reason for the meteoric rise of the label on digital platforms is improved internet access and cheap data in India.

This has led to massive consumption of online videos in the past two years and triggered a wave of new users to YouTube. The video platform, according to Comscore, now reaches 245 million viewers in India.

“T-Series embraced the platform early, and their position today is a testament to their commitment to our platform, to their team that truly understands the medium, and to their programming strategy of delivering content that reflects the rich diversity of India and its music scene,” Gautam Anand, managing director of YouTube’s Asian branch, YouTube APAC, told me.

In the end, says Bhushan Kumar, it is all about the music, and how it’s played, packaged and sold on the channel. Content is his favourite word.

“Some things have never changed in India. Melody, for one. The sound has changed, the rhythm has changed, and lyrics have become more contemporary,” says Kumar.

“In India, romantic and sad songs will never die.”

“Dance songs can be different sometimes – sometimes it could be related to liquor, sometimes to a girl, sometimes even a romantic track.”

I ask him once more about PewDiePie.

“We are a music label. He does something else. He’s playing games, vlogging and stuff – no comparison. I wish him all the best.”