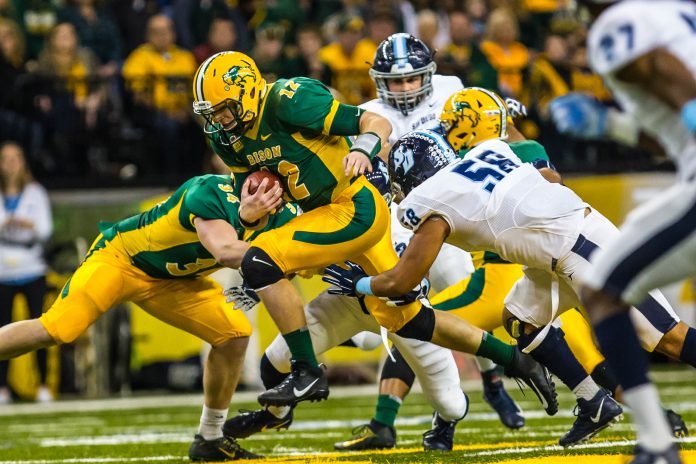 North Dakota State University football games in 2018 will be moving from ESPN3 to the new subscription-based ESPN+ available on ESPN.com and the ESPN app. All 11 regular-season games will be seen on ESPN+ in addition to continuing statewide television coverage on the NBC North Dakota network and more than nine hours of game day radio coverage.

KVLY-TV and the NBC North Dakota network will carry 10 of the 11 regular season football games statewide in high definition on KVLY channel 11 in Fargo and Grand Forks, KFYR channel 5 in Bismarck, KMOT channel 10 in Minot, KQCD channel 7 in Dickinson, KUMV channel 8 in Williston.

All 10 KVLY broadcasts will be available to ESPN+ subscribers. NDSU’s November 10 game at Missouri State is exclusive to ESPN+ as part of the Missouri Valley Football Conference television package.

The all-new ESPN app curates all of ESPN’s incredible content into a personalized experience unique to each fan. The app includes three core pillars of offering for fans:

Subscribe to ESPN+ online at ESPN.com or in the ESPN app, then link your subscription to any of these supported devices in the United States:

A seven-day free trial is currently available to first-time ESPN+ users. Subscribers get no display ads, pre-roll ads or post-roll ads on the ESPN App, ESPN.com and connected TV devices.

For questions about the new ESPN App or ESPN+, please contact the ESPN customer care team at support.espn.com or 1-888-549-ESPN.

Football radio broadcasts will be heard in Fargo-Moorhead on 107.9 The Fox, Bison 1660 and 92.7 FM.  Inside the Fargodome, listen to the game on 92.3 FM.  The Peterson Farms Seed Bison Radio Network has 24 stations across North Dakota and Minnesota. Jeff Culhane enters his third season as play-by-play voice of the Bison and will be joined again by NDSU and Buffalo Bills Hall of Famer Phil Hansen as color analyst and NDSU’s Jeremy Jorgenson as the sideline reporter. Network coverage includes a 30-minute pregame show and 30-minute postgame show.

NDSU All Access video streaming is available for Bison home games by subscription on GoBison.com/allaccess featuring the Fargodome’s five-camera HD video production and the NDSU radio call of Jeff Culhane, Phil Hansen and Jeremy Jorgenson. Subscriptions are $6.95 for one day, $10.95 monthly or $89.95 annually and each purchase supports NDSU Athletics. Postseason games are not included.

Audio streaming of the Bison Radio Network broadcast for every NDSU football game is available free of charge on GoBison.com/allaccess.

NDSU All Access is available through your Internet browser on any desktop or mobile device, and will be available on the soon-to-come GoBison.com mobile app for Android and iOS.

BisonStats.com is available for every home game with complete individual and team statistics and play-by-play descriptions. Select road games may be available. Visit the GoBison.com football schedule for links to each event.

Get all the highlights, feature stories and analysis from head coach Chris Klieman and host Jeremy Jorgenson live at 10:30 a.m. Sundays starting September 3 and throughout the season on KXJB channel 4 (CBS) in Fargo and Grand Forks, and statewide on NBC North Dakota network stations KFYR channel 5 in Bismarck, KMOT channel 10 in Minot, KQCD channel 7 in Dickinson, KUMV channel 8 in Williston. The show re-airs Sunday nights in Fargo and Grand Forks after the late local news on KVLY channel 11 (NBC).

Voice of the Bison Jeff Culhane and NDSU football sideline reporter and basketball color analyst Jeremy Jorgenson host The Insiders from 11:00 a.m. to 1:00 p.m. weekdays on Bison 1660 and 92.7 FM. The Insiders provide Bison fans with a behind-the-scenes look at NDSU Athletics interviewing all the coaches and players Bison fans want to hear from, while breaking down all angles of the sports world each and every day. If you’re a Bison fan looking for more, The Insiders is your show to talk NDSU Athletics.

Get your Bison fix when the work day is done with the BrakeDown! Keith Brake, NDSU football pregame and postgame host and women’s basketball play-by-play voice, is your guide through the biggest stories of the day from the Bison and beyond with insight, interviews, and your calls! Put the Brake on Monday through Friday from 4:00 to 6:00 p.m. only on Bison 1660 and 92.7 FM!