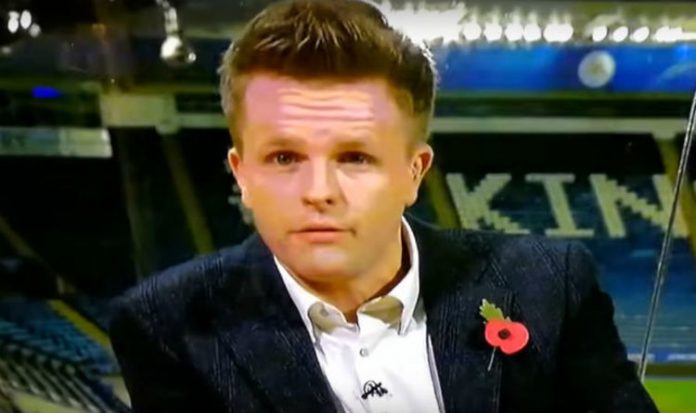 The BBC are reporting that Vichai Srivaddhanaprabha was in the helicopter when it came down at about 8.30pm on Saturday night.

It is not known how many other people were on board the helicopter.

Humphrey had earlier turned around in the BT Sport studio to watch the helicopter take off.

He joked to fellow pundits that they needed to consider their ‘life choices’ – a reference to the billionaire Thai businessman’s wealth.

But minutes later, the helicopter crashed – with audio heard on live TV.

A shaken Humphrey took to the camera and said: “Things have taken a very sad turn in the last few moments.

“Obviously it’s been a very difficult day already because we had the news this morning that our great friend and colleague Glen Hoddle was taken ill.

“It’s something that is a very regular feature for us. We often sit here after the games and see the helicopter take off, make remarks about owning a football club and flying in a helicopter.

“However, it’s suddenly got very serious because the helicopter that took off from here just about five minutes ago whilst we were live on air… has crashed.

“It’s crashed in the club car park just outside the window here. We were on air, we heard a commotion.

“No news on casualties, no news on who was in the helicopter, nothing’s been confirmed.”

There are fears there are ‘no survivors’ from the horror Leicester helicopter crash at the King Power Stadium on Saturday night.

Sky News reported this morning that ‘it’s not clear if Srivaddhanaprabha, a Thai billionaire, was on board but there are fears that there are no survivors’.

Sky News reporter Katerina Vittozzi said this morning: “As you can see behind me, there’s a police cordon in place all around the King Power Stadium.

“The car park where the helicopter crashed is just behind the stadium behind me.

“Leicestershire Police have told me this morning that the investigation is being led by the Air Accident Investigation branch.

“They will try and piece together exactly what led to this helicopter crashing just moments after it took off last night.

“Just in the last 10 minutes or so, we have seen a few people arrive with flowers. It’s testament to how important the owner is to the Leicester City Football Club fans.

“He is a man who, when he bought the club, oversaw the most successful period in the club’s history, leading it to the Premier League win in 2016.

“He was a man who loved England, loved football and loved all things British including polo.

“There is no confirmation he was on board this flight but we do know it was routine for him to use the helicopter both to get to games and to leave afterwards.

“But as yet there’s no details from the police about who was on board the aircraft and how it crashed.

“There are a few fans who have turned up with flowers to the stadium. We can expect many more over the course of the day to come and apy tribute as they discover more and more details about what happened here last night.

“Vichai Srivaddhanaprabha was not just a stand-alone owner of this club. He was someone who was very much involved with its life, he’d offer things like free beer to spectators when they were doing welll.

“He was from Thailand but he was very much an integral part of this club having bought it in 2010.

“Fans here have spoken about their deep shock at this and their sadness as well.”