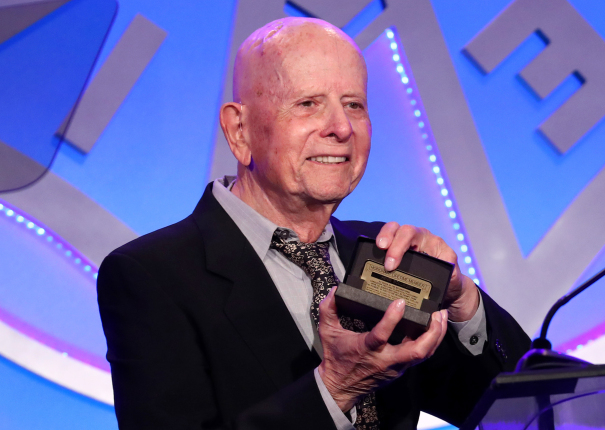 Henri Bollinger, a five-time president of the Publicists Guild and a fixture for decades at its signature Publicists Guild Award luncheon, died Monday at the Motion Picture & Television Fund campus in Woodland Hills of complications from surgery, Deadline has learned. He was 89.

Bollinger’s Hollywood publicity career spanned 60 years. He joined the then-Publicists Guild of America in 1957, the second year of its existence.

Recalling those early years to writer Ed Crane in the Publicists Awards’ 50th anniversary program, Bollinger said, “attendance at General Membership meetings ranged between 150-200 members. In those days you were fined $15 if you missed a meeting [held usually at the Hollywood Roosevelt Hotel] without a valid reason.”

He served for more than 55 years on the Publicists Awards Committee, which organizes the annual ICG Publicists Awards Luncheon held at the Beverly Hilton. He was chairman of the committee for 37 years, retiring from that position earlier this year, though remaining a committee member.

The Publicists Guild luncheon was launched in 1964, a more measured and appropriate event than its precursor, the annual Ballyhoo Ball. Usually held at a nightclub, the latter was known for getting rowdy and risque, thanks mostly to plenty of booze. “At one particular ball,” Bollinger told Crane, “I was present when Frank Sinatra actually challenged John Wayne to a fisticuffs in the parking lot. Needless to say, both of the guys were three sheets to the wind.”

Bollinger ran his own agency for 50 years and gained a reputation in the industry as an innovative and creative force in publicity, establishing high standards for publicity professionals in the entertainment industry. His contributions to the field came to a head in 1974, when he won the ICG Publicists’ Les Mason Award, the guild’s highest honor for a publicist. He was later honored with the Bob Yeager Award.

Bollinger worked on several film campaigns including The People Under the Stairs, Nightmare on Elm Street, Shocker, The Serpent and the Rainbow, and Friday the 13th. On the TV side, he worked on Major Dad, The Price Is Right, Deception: A Mother’s Secret, The Secret Files of J. Edgar Hoover, The Ann Jillian Story, The Kennedy Center Honors, Simon & Simon, The Ernie Kovacs Show and The Julie Andrews Hour.

Bollinger is survived by his wife Sandy; their children, Jennifer Goosenberg, Jeffrey Bollinger and Jeremy Bollinger; and their grandchildren.

The memorial service and interment will be August 30 at Groman Eden Memorial Park in Mission Hills.