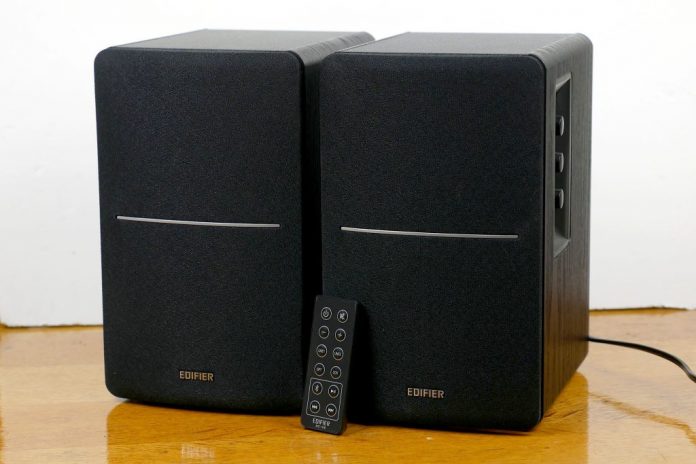 The Edifier R1280DB is a pair of powered speakers designed primarily for use with desktop PCs. However, they also lend themselves well to providing an easy audio boost for a TV or a one-stop Hi-Fi solution.

With analogue and digital inputs, Bluetooth connectivity and a remote control, they’re easy to set up and reasonably versatile too. And with a total power output of 42W, they have plenty of power on tap.

Costing just £120, they’re an affordable upgrade, whether you’re looking for a home entertainment system or just something to give your PC a bit of a boost.

Stick them next to a 24-inch or smaller monitor and they rather dwarf it, but they’re a good match for 27-inch and larger monitors.

They also sit nicely next to mid-sized TVs, although you’ll have to account for the extra depth a proper speaker like this comes with: if your TV’s mounted on a wall, these will stick out considerably further than the telly.

This middle-ground feel also applies when it comes to the styling of the speakers. Rather than the plastic of many desktop speakers, you get a proper, hefty MDF construction with a wood-textured vinyl wrap, just as you’ll see on a Hi-Fi bookshelf speaker. Said wrap can be either an all-black finish or a brown faux-wood one.

Whichever colour option you choose, these speakers look great. As well as simply being built to a high standard, Edifier has added some key subtle details that elevate them well above what you’d expect for the price. There are rounded corners, a subtle switch from the wood-textured sides to the mottled-textured middle and a neat chromed-plastic stripe across the middle of the speakers, all of which add that something extra.

Remove the fabric speaker grille and you’ll find the two drivers and single bass port of each speaker. The front firing bass port means you can mount these speakers in confined spaces and not lose any bass performance.

The drivers consist of one 4-inch (102mm) paper-cone woofer and one 13mm silk-dome tweeter. So, there are no particularly exotic and rigid materials used for either driver, but that’s as would be expected for the price of these speakers. The grille itself is attached by plastic pins that press-fit into holes on the front of the speaker.

As it’s a powered pair of speakers, you’ll find a different selection of features around the back of the left and right speakers. The left speaker is passive, so it just includes spring clips for its audio input.

The back of the right speaker is rather more interesting. As well as the output clips for the left speaker, you get two line-level analogue audio inputs that use a separate phono socket for each channel. Below these are the phono and optical digital inputs, while over to the left is the mains power switch.

This selection of inputs is what makes these speakers such a versatile option, especially when combined with the Bluetooth input. You can hook up a TV or PC, something like a Google Chromecast Audio and connect your phone through Bluetooth, all without any extra boxes or paraphernalia.

Also on the right speaker are the volume, bass and treble controls. The latter two are standard analogue dials that sit in a middle position by default and turn 120 degrees to the right or left. Meanwhile, the volume control is of the infinite-spin, notched variety. This means you can adjust volume on the speaker and via the remote without one overriding the other.

Next to these dials is an LED that indicates power, input and Bluetooth status. However, one thing to immediately note is that this LED isn’t visible from the front, making it a bit tricky to tell if the speakers have registered a button press on the remote.

You may think this a small issue but I found the volume adjustment to be overly smooth and subtle, such that it was quite difficult to immediately tell the difference, making it all too easy to press the volume button too many times before realising the volume had changed.

As to the remote, it’s as cheap and basic as you’d expect. It’s all plastic, with a glossy top that incorporates twelve popper buttons. As is often the case with this style of button, it’s difficult to tell if you’ve pressed them, with a fair bit of force required. So this again ties into why it’s a bit of an inconvenience not to have that visible LED indicator. By all means, the remote is still perfectly usable and very welcome – but it’s not without its issues.

Otherwise, the twelve buttons are all laid out logically enough – there’s only so much you can do with two identical rows – and the addition of Bluetooth playback controls is crucial for making the most of this feature.

Given the size and heft of these speakers compared with most PC speakers, it’s reasonable to expect a powerful and full sound – and sure enough the Edifier R1280DB deliver the goods. There’s more than enough volume for any PC setup and plenty to fill a modest-sized living room too.

That said, there is definite depth and warmth to the sound. The mid-range and upper bass are not forced, but there is a little bit of tail-off to the top end. It lacks that last little bit of sparkle that you get with more expensive speakers.

For this reason, I preferred to dial down the bass and boost the treble just a little. This brings out dialogue and other higher-range detail without making the overall sound too loud. For day-to-day TV watching, an overly forward bass presence can be distracting.

Even with this tweak made, you still get plenty of power from these speakers. Fire up some bombastic movies and you get all the impact and energy you’d hope for from explosions and other dramatic moments.

As for music, this is perhaps where these speakers excel the most – as their warm tone is so well-suited to a wide range of genres. If you’re really into your bass, then a separate sub will be needed, but for most users, there’s no need.

Compared with other modest audio upgrade solutions for a TV, you get far more depth and volume here than with basic all-in-one soundbars. However, it will depend on what you’re after. If you just want a smidge more depth and volume – but no rumbling bottom end that will disturb the neighbours – the soundbar approach may be preferable.

Overall, whether you do feel the need to tweak the EQ a little, the key thing is that these speakers have the range to provide the option. It’s this versatility that makes them so appealing.

If you’re after a significant upgrade in power for your TV or PC monitor speakers, the Edifier R1280DB are a great option. They deliver Hi-Fi-like levels of power and warmth, all without the hassle of any extra equipment, and for a bargain price.

Add in that you can also plug in several analogue and digital audio sources, connect your phone via Bluetooth and control the lot with a remote control, and you have a super-convenient one-stop audio upgrade.

There are just a couple of things to keep in mind. The first is that these are quite a hefty upgrade for a PC. If you’re only likely to listen at low volumes, then a smaller pair of speakers that emphasises high-end detail a little more may suit you better.

Likewise, if you’re not that fussed about a powerful bass response and just want a slightly warmer, clearer sound for your TV, then an all-in-one soundbar or smaller speakers may be a better option.

Power, versatility and a bargain price make this pair of speakers a fantastic choice.