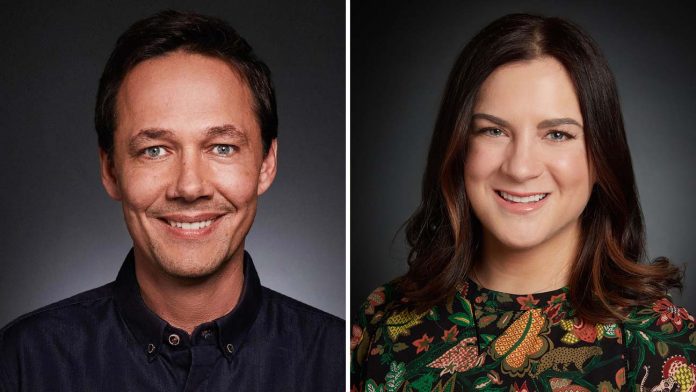 The duo will oversee all content on both the cable network and for the newly formed Comedy Central Productions.

Comedy Central has promoted Jonas Larsen and Sarah Babineau to co-heads of original content, overseeing development across all platforms for the cable network.

The duo, who have been executive vps and co-heads of talent at the Viacom-owned cabler since 2017, will also oversee content developed at the network’s recently launched in-house studio, Comedy Central Productions. Their purview also includes live events, audio and theatrical content. They will report to Kent Alterman, president of Comedy Central, Paramount Network and TV Land.

“Through their incredible eye for talent and innate ability to develop the right project for the right platform, Sarah and Jonas have helped build the Comedy Central brand into the strongest position it has ever been,” Alterman said Thursday in a statement. “Working closely with them often makes me feel a little less sharp, but in a good way. We are so lucky to have them.”

With the promotion, Babineau will relocate to Los Angeles and oversee all scripted content (narrative, sketch and animation), including projects from Comedy Central Productions for third parties. She also will work with Paramount Players on Comedy Central-branded feature films and continue as executive in charge of production of The Daily Show.

Larsen will be in charge of all unscripted content, including series, documentaries and specials, along with stand-up, live events and audio content. He, too, will supervise development of Comedy Central Productions offerings for other outlets.

“We could not be more excited and honored to continue building the Comedy Central brand and expanding its amazing legacy,” said Babineau and Larsen. “To come to work every day with the goal of making the world laugh is a dream come true.”

Over the past two years, Babineau and Larsen have helped reshape Comedy Central’s scripted lineup with series like The Other Two, the sketch show Alternatino With Arturo Castro and the upcoming South Side, Awkwafina and Robbie, from comedian Rory Scovel. The cabler has also signed a slew of overall and first-look deals with comics including The Daily Show‘s Roy Wood Jr., Jim Jefferies and Anthony Jeselnik. Broad City creators Abbi Jacobson and Ilana Glazer signed a first-look deal with Viacom in 2018.

Babineau and Larsen also were instrumental in getting David Spade’s Daily Show companion Lights Out on the air (it premieres July 29), hoping a turn away from politics at 11:30 p.m. will help stabilize the time period after Larry Wilmore’s Nightly Show and The Opposition With Jordan Klepper didn’t stick.