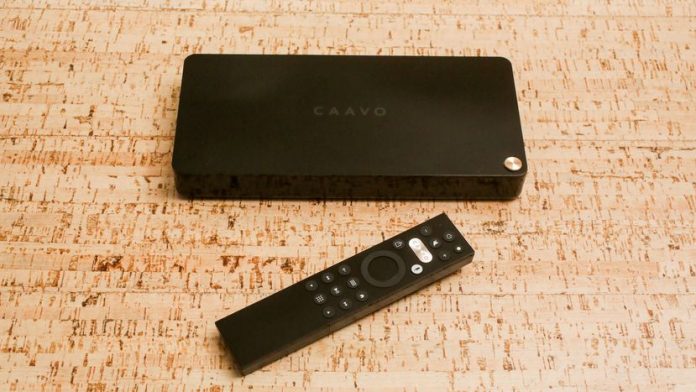 If you have an entertainment system with a nice TV and more than a couple things connected to it — like a DVR, game console, streamer and AV receiver — you probably own a universal remote. And chances are, that remote is a Logitech Harmony.

Harmony has held hegemony in the living room for more than a decade. Its clickers are my go-to recommendation to eliminate that dreaded coffee table-full of remotes. The Harmony Companion is my current Editors’ Choice, and I still consider it “the best universal remote experience for the money, making your home entertainment center easier to use than ever.”

I wrote those words more than four years ago and they still apply today. No remote released since can challenge Harmony’s utility and ease of use. But that could change soon, thanks to Caavo.

The Caavo Control Center, available today for $99, has “Harmony killer” written all over it. It’s actually the second system from Silicon Valley startup Caavo. The first, which came out in February and cost $400, was promising but fatally flawed because it wasn’t compatible with high dynamic range (HDR) video, which provides the best image quality to midrange and high-end TVs. It also didn’t work with Dolby Atmos audio.

The new Control Center is not only affordable, it’s HDR- and Atmos- compatible. The catch? You’ll need to pay a $2 monthly service charge to use the Control Center. You can get a slight discount if you prepay for a year, which costs $20, but there’s no “lifetime” option a la TiVo.

That input box, which Harmony doesn’t offer, is what separates the system from Harmony. It allows Caavo to overlay your TV screen with its own menu system, opening up a bunch of new capabilities and features.

In my original review, the Caavo home page made it dead simple to select devices to control. You can also go directly to apps like Netflix, Amazon, Hulu and more without having to remember which device they’re on. Caavo actually has its own built-in search, which looks for TV shows and movies across devices, complete with the ability to talk into the remote.

The final trick up Caavo’s sleeve is Watchlists. From my original review:

Perhaps the most unique and powerful aspect of the Caavo interface is Watchlists. It gathers all of the recently watched shows and movies across many of the the apps you’ve signed into, and also lists the contents of compatible DVRs. You can quickly resume and watch recent shows, and even access different profiles (e.g. “kids” on Netflix). Selecting one launches the app on your preferred device and immediately begins playing the show.

Since my review Caavo has been refining Watchlists by adding “Crowd Surfing.” In a call with CNET, company co-founders Andrew Einaudi and Ashish Aggarwal likened them to Spotify playlists. You can create and modify lists, share them publicly or privately with friends or family members, and browse Caavo’s own curated lists, including ones created by “influencers” enlisted by the company.

Physically the Control Center looks much less high-end than the original (featured in the video above). It lacks the beautiful woodgrain finish, the innovative HDMI-corralling posts and the volume buttons on the main unit, and is less than half as large.

Another downgrade the number of HDMI inputs, which dropped from eight to four — a potential sticking point for dudes with huge systems. I asked whether Caavo supported external HDMI switches to expand that number. Aggarwal said you could definitely add one but you’d have to handle the switching manually. He said the company was considering its own expander device that would cleanly integrate more inputs into the Control Center, but wasn’t more specific on timing or price.

Aggarwal claimed the Control Center is actually faster and more responsive than the original, thanks to new silicon and software tweaks. Its remote uses AA batteries (the original was rechargeable) that last four to six months.

Overall Caavo costs more than the Harmony Companion, especially when you consider the monthly fee, but it has the potential to ease two different hassles: Controlling your system and finding something to watch. I’ll be back with a full CNET review soon.