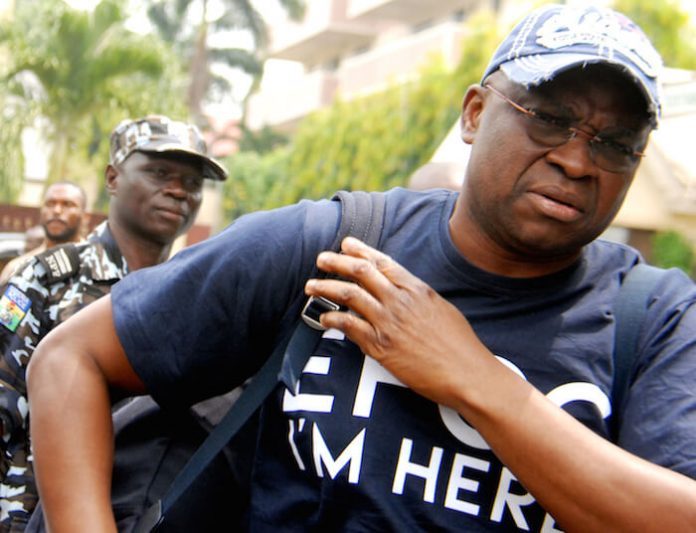 There are indications that former Governor of Ekiti state, Ayo Fayose may spend more time in the custody of the Economic and Financial Crimes Commission (EFCC) for more interrogation over alleged fraud of N4.7 billion slammed against the former governor by the anti- graft agency.

The spokesman of EFCC Wilson Uwujaren told BusinessDay in a chat on Thursday that the governor is still in their detention facility saying “it is not proper to talk about the matter now because it is still under investigation.”

Meanwhile the commission also debunked an audio tape circulating on the social media in which the Acting Chairman of EFCC, Ibrahim Magu, reportedly made comments suggesting that nothing will happen if former governor Ayo Fayose, dies in custody.

Uwujaren described the audio tape as fake adding that the place where the conversation occurred as well as the person that Magu was supposedly talking to was not disclosed. “Members of the public are advised to disregard this disingenuous creation as it is the handiwork of mischief makers intent on distracting the Commission from the serious work of wrapping up the investigation into the corruption allegations against the former governor of Ekiti state.

“The audio recording is fake as the comments did not emanate from the Chairman of the EFCC. Purveyors of this fake news especially a former spokesperson of a leading political party are warned to desist”, Uwujaren said.

Fayose, on Tuesday visited the old Head Office of commission in Wuse 2,  over alleged corruption charges slammed  against him by the Federal government.