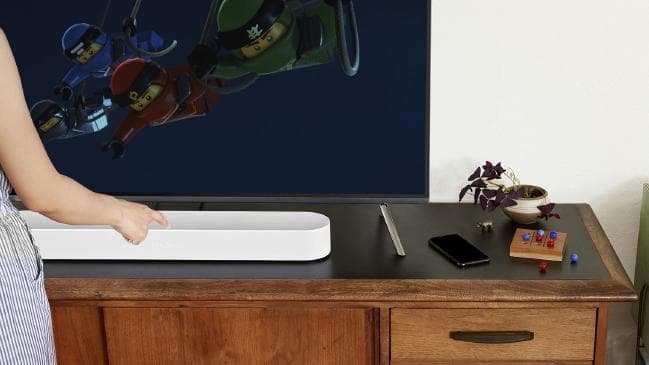 THE future of television is finally arriving but the best equipment will make it truly shine.

From the biggest of screens to the smallest of speakers, these are the tricked-out, 4K-ready, home-entertainment marvels you should consider when preparing your lounge to meet a new era.

This 75-inch monster is more than just a big 4K screen. It features full-array LED backlight, surprising levels of brightness, supports the new HDR 10+ format for greater colour and contrast on the screen, and its virtually invisible One Clear Connection cable attaches to a box that lets you hide the tangle of cords from view.

LG’s newest organic light-emitting diode television features a couple of advantages over its competition. The most notable is that screen that displays pure black thanks to OLED technology, but it’s also equipped with a new Alpha 9 image processor for upscaling, voice controls that replace the remote control, and Dolby Vision for HDR content.

This newly announced TV, arriving in October, is the first in Sony’s new Master series that represents the company’s best screens. This 75-inch model features the X1 Ultimate processor for 4K upscaling, X-Wide Angle that helps viewers see the screen from an angle, the latest Android TV software for smart apps, and local dimming.

Perhaps Samsung’s boldest TV to date, this unusual screen is designed to look like a picture frame and even displays famous artworks or your family portraits when it’s not screening 4K TV shows. You can even add a magnetic wooden frame to complete the look, and it features a brightness sensor to adjust its display to your room.

The top television from this Chinese firm looks a little like it’s levitating, thanks to an unusually designed metal base. The screen is conventionally high-end in quality, however, featuring local dimming, 2500 nit brightness, and smart TV software that will let you use your phone as an additional remote control.

This slick new Sonos product is designed to boost TV audio in small to medium-sized rooms with a minimum of fuss or wires. It features four woofers, one tweeter, and three passive radiators to deliver rich sound, but it can also connect to other Sonos speakers, stream music from Apple devices using Airplay 2, and be controlled using Amazon Alexa commands.

This one long column that sits beneath the TV looks basic but its facade hides 11 speakers and two tweeters that push the sound towards the ceiling to fill the room with sound. Distortion-cancelling technology also features as well as 32-bit upscaling to make even CDs sound better than their data intended. This soundbar can be paired with a floor subwoofer for extra bass.

This US audio brand is famous for its finely tuned bass and it delivers it to the lounge room in a slim package that sits beneath the screen. The SoundTouch 300 is perhaps best at delivering a wide sound that would complement epic movies, however, can be calibrated to suit your lounge room, and connects to smartphones by Bluetooth for streaming music.

This satellite-connecting set-top box is significantly faster than the models before it, allowing it do more than just switch channels, menus, and start recordings quicker, but process beefier 4K signals. The undercover set-top box was rolled out to about 300,000 homes before its true nature was revealed, but there are rumours of more features yet to come.

This new Apple TV doesn’t look like it fell far from the first model, but this little black box now streams 4K content and can help you when you feel like there’s nothing you feel like watching. It comes with a slick remote control with touchpad control to guide a pointer around the screen and a button to summon Siri so you can search for films. There are also plenty of catch-up apps available.

It may not be as convenient as sitting back and watching 4K TV broadcasts, but this 4K Blu-ray player will ensure you can play your favourite movies in the highest quality on the market, and also supports HDR vision in multiple formats and high-resolution audio.