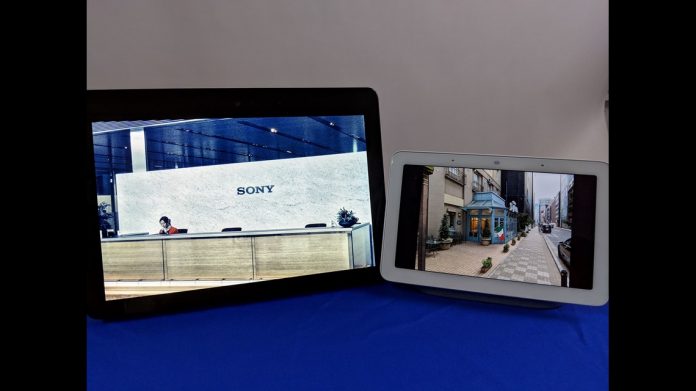 MANHATTAN BEACH, Calif. – The battle of the video speakers begins in earnest today.

Google officially released the Home Hub, a $149 digital photo frame, YouTube video player, and visual recipe reciter (among other things) that looks to take on the second edition of the $229 Amazon Echo Show, which has been in release but is sold out through Nov. 5.

The two are expected to be among the most heavily marketed new holiday products. Last season, Amazon’s entry level Dot was its best seller of the holidays, and Google discounted the Home Mini speaker so heavily it caught up to Amazon in market share. They will also compete with Facebook’s Portal, which starts at $199, and will be released in November.

So how do the two new video display units compare?

The Show is 10 inches, up from the 7-inch version originally released in 2017, and not available for sale now, compared to 7-inches for the Hub. The Show screen is bigger and brighter.

Home Hub has both the world’s biggest video site – YouTube – and all those millions and millions of videos, as well as YouTube TV, the cable TV alternative that charges $40 monthly for broadcast and cable TV channels without the bulk of a cable subscription. Amazon has Prime Video and the original shows like the Emmy-winning Magnificent Mrs. Maisel and Bosch, Hulu’s $40-monthly cable alternative Hulu with Live TV, and content from sites like Daily Motion and SideChef. Google won’t allow the YouTube app on Show because of a corporate spat. Amazon countered with a workaround (calling up YouTube on an Amazon browser), but getting specific video clips on command is very spotty.

Watching a music video on Amazon Echo Show, Google Pixel 3 and Google Home Hub. The video plays on the Google devices, while the lyrics play over an image on Echo Show

Amazon offers songs from the large Amazon Music collection and lets you view the lyrics while you listen. That’s cool, but Home Hub has YouTube, and you get to see the video of the song on a device built for video. Amazon has occasional music videos, and, of course, you can try to find the song within YouTube and the Amazon browser.

Amazon’s large collection of e-books and audiobooks is a natural fit here. Amazon offers “StoryTime,” professionally narrated stories that get read to kids, as well as the huge Audible library of audiobooks. Google has audiobooks available within Google Play Store.

Google Home Hub lets you shop for products from various partners, including Fry’s Electronics and Best Buy. And while it’s an improvement over non-visual shopping on the audio Home device, the selections are still limited, plus you’ll find a better experience on a bigger screen. Show, obviously, shows images larger, offers more sales information and has a way bigger selection.

You can make video calls to other Echo owners or phone calls to specific phone numbers, while the Hub is audio call only. The experience is more seamless on the Hub and it acts as a great speaker phone, which could put the final nail in the coffin for land lines.

Google Photos has long been my go-to photo app for many reasons: It automatically backs up every image I take on a smartphone, helps me find old photos through the magic of Google search, and allows me to do quick edits on the fly from within the app as well. I have hundreds of thousands of pictures and videos in Google Photos. So the idea of a digital photo frame showcasing either my most recent highlights, just family, or specific albums I’ve created on the Hub is ultra cool. With Show, you get images from Amazon’s Photos’ inferior Photos app, which, while it’s been improving, can be a monster to deal with. A collection of images were displayed upside down. And when I asked for specific photos, like my most recent images, I got a thumbs down from Alexa. Unlimited uploads are free to members of the Prime expedited shopping service. Google Photos has free uploads to all.

Amazon has more skills – specific tasks – available for the Echo, but most are audio only. Google has the world’s most popular and smartest search engine for seeking information. Still, both offer visual mapping, weather reports and calendar information.

The Home Hub wins in most categories due to its richer video content and ease of use for accessing photos. But it’s too small. The Show looks more impressive, with bigger and brighter screen but is weak on video content – unless you’re a devotee of just Prime Video. But really, when you’re buying a video device, you’re going to want more video content.

More: Google Home Hub would be the perfect TV

More: Top skills for Alexa: 6 tips for your Amazon Echo that will simplify your life