Back in 2006, a group of recent Ryerson University graduates thought — as most graduates do — “What now?”

Instead of spiralling into worry and despair, they started a podcast about basketball. They called it The Basketball Jones and for four years they created content without getting paid a dollar.

Eventually, the podcast was picked up by The Score, where the creators started dabbling in video. In 2013, the team was offered the opportunity of a lifetime: to turn that podcast into a show on NBA TV.

That show, The Starters, is a Canadian success story when it comes to taking podcasts to the screen. That move is just one example of a growing trend that’s seen broadcasters scooping up the likes of Lore, Up and Vanished  and Homecoming, to name a few.

But it hasn’t been easy, says J.E. Skeets, who has been with The Starters from the beginning.

Their team, for example, didn’t immediately understand just how many people and how much time it would take to make a quality TV show.

“They’re two different beasts. We were naive to think that we could just flip on cameras and make a podcast for television.”

According to The Canadian Podcast Listener, an examination of the Canadian audience for the format, 34 per cent of the country’s adult population have listened to podcasts in the past year, while 43 per cent have listened at some point.

The report released in summer 2017 by Ulster Media, Audience Insights and The Globe and Mail, is based on an online survey 2,518 Canadians aged 18 and over through Maru/Matchbox’s Angus Reid Forum.

As podcasts become more and more popular, it’s easy to see why there’s been a boom of screen adaptations.

A look at some of the hit podcasts getting adapted for film and television. 0:30

For one thing, they have already developed a fan base. In addition, many are by creators and voices “we’ve never heard before,” says Jocelyn Hamilton, president of eOne Television Canada.

“In the podcast world, you tend to find a unique point of view that is passionate, that is coming from someplace that is core to new content, that we can’t find anywhere else.”

eOne launched its podcast network in December 2017 and it’s already looking at the possibility of adapting that content for other formats.

There are three things Stuart Coxe, who heads up eOne’s podcast division, looks for when scouting new talent: the ability to grow an audience, a podcast’s potential when it comes to advertisers and possible adaptations to another medium, which could be “everything from live shows to books to TV shows,” he said.

But it’s not just podcasts making the move to screen — the movement flows both ways. With the rising popularity of the format, established television shows are getting in on the action as well.

One of the most successful examples is British reality TV series Love Island, which jumped onto the bandwagon with Love Island: The Morning After. It was clearly a smart move: the podcast spin-off of the TV hit was No. 1 on the iTunes charts in the U.K. regularly this summer, even rivalling BBC Radio 5’s podcast World Cup Daily as the international soccer tournament played out.

Adaptations from podcasts that have stayed close to the original material have often been the most successful. Desus Nice and The Kid Mero’s irreverent late-night news and pop culture commentary show Desus & Mero (based on their podcast Bodega Boys), is one example. Another is 2 Dope Queens, which started as a podcast hosted by Phoebe Robinson and Jessica Williams. The pair later joined with HBO to create hit comedy specials.

But success definitely isn’t guaranteed. There are production challenges, storytelling issues, budget battles and the risk that the intimacy that can make a podcast sound unique will be lost.

The TV show Alex Inc. turned StartUp — a well-received podcast about starting a business — into a sitcom about starting a podcast company. It only lasted one season. There was a similarly short run for Stuff You Should Know. In both of these cases, the TV version added storylines that went far beyond the podcast version.

Jeffrey Cranor and Joseph Fink are the creators of Welcome to Night Vale, a hit podcast that takes the form of a radio broadcast from a small desert town, where every conspiracy theory is true and people treat extraordinarily bizarre events as normal everyday life.

The pair started writing their podcast in 2011, posted their first episode in June 2012 and have made more than 130 episodes. At this point, they’re experts in their own form. But they are also well aware that there’s a whole lot they don’t know as they move their podcast into the TV market with Sony Pictures and FX. 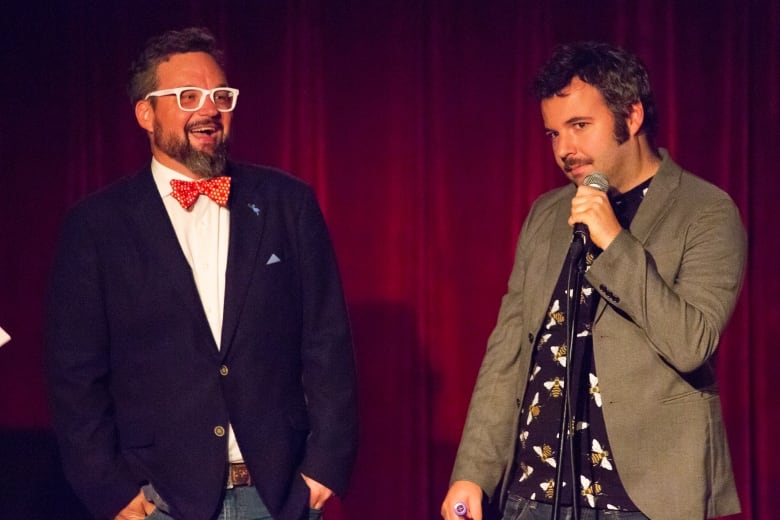 “Ninety-nine per cent of it I don’t understand,” Cranor said of the TV world — and so the podcast creators are bringing in some big name TV help.

Cranor and Fink partnered with Gennifer Hutchison, who is currently an executive producer on Better Call Saul, to develop the pilot.

Hutchinson knows the ins and outs of making top tier TV, but Cranor said another big factor is that she understood that their show is a comedy that is “weird” but also “deep and meaningful.” 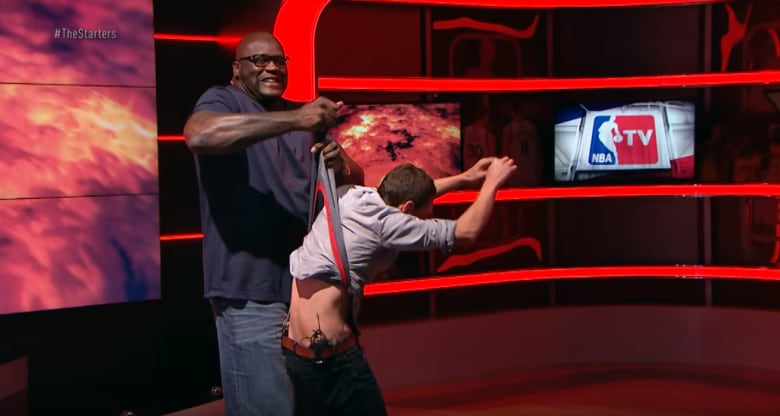 Shaquille O’Neal gives Skeets a wedgie on an episode of The Starters, in reference to basketball wedgies: when the ball gets jammed between the hoop and the backboard. (The Starters/YouTube)

Cranor and Fink know there’s a long road ahead. Skeets and the rest of The Starters crew, meanwhile, are living the podcast-to-screen dream. They’ve been on the air now for five years — longer than any other show that’s made the transition.

“I’m one of those few people who wakes up on Monday morning and thinks ‘Oh, I’m excited to go into the office to talk basketball with my buddies and get paid for it,” Skeets said.

“I still pinch myself every day.”