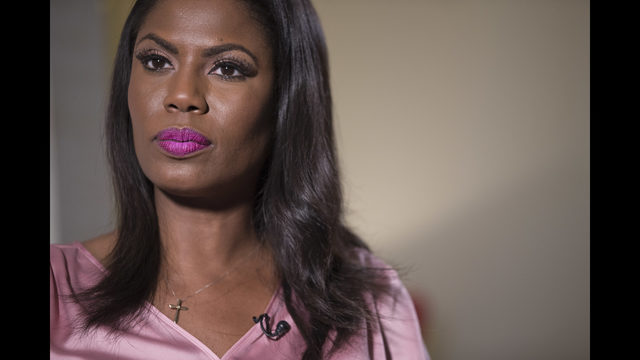 Omarosa Manigault Newman has a stash of video, emails, text messages and other documentation supporting the claims in her tell-all book about her time in the Trump White House, a person with direct knowledge of the records told The Associated Press Friday.

Manigault Newman has made clear that she plans to continue selectively releasing the pieces of evidence if President Donald Trump and his associates continue to attack her credibility and challenge the claims in her book, “Unhinged.” She’s already dribbled out audio recordings of conversations, and video clips, texts or email could follow, according to the person who described what Manigault Newman has called a multimedia “treasure trove.” The person was not authorized to discuss the issue publicly and asked for anonymity.

“I will not be silenced. I will not be intimidated. I’m not going to be bullied by Donald Trump,” the former Trump aide told The Associated Press this week as she seemed to dismiss a threat from Trump’s campaign. She spoke to the AP hours after Trump’s campaign announced it was filing an arbitration action against her alleging she’d violated a signed agreement with the campaign that prohibits her from disclosing confidential information.

She told PBS in a separate interview this week: “I have a significant amount, in fact, a treasure trove, of multimedia backup for everything that’s not only in “Unhinged,” but everything that I assert about Donald Trump.”

Manigault Newman claims Trump officials offered her a job on the campaign as a way of silencing her, after she was fired from the White House. She’s accused Trump of being racist and suffering from a mental decline.

The White House has countered by branding Manigault Newman as a disgruntled former staffer with credibility issues who is now trying to profit from a book based on false attacks against an individual she has called a mentor and has admired for more than a decade.

Trump has also lashed out at Manigault Newman, calling her a “lowlife,” ”wacky and deranged” and a “dog.”

Simon & Schuster this week also dismissed threatened legal action from Trump’s campaign. A campaign attorney told Simon & Schuster in a letter that “Unhinged” violated Manigault Newman’s confidentiality agreement, but the publisher responded that it was acting “well within” its rights.

“Unhinged” has spent the past few days at No. 2 on Amazon.com’s best-seller list, trailing only Rachel Hollis’ lifestyle book “Girl, Wash Your Face.”

Manigault Newman was director of communications for a White House office that networks with various constituency groups until she was fired last December by chief of staff John Kelly, citing “significant integrity issues.” Before joining the administration, Manigault Newman handled African-American outreach for Trump’s presidential campaign. She has known Trump since 2003, when she became a contestant on Trump’s TV show, “The Apprentice.”

She has already released several secret audio recordings, including of the meeting in which she was fired by Kelly.

In another recording, Trump’s daughter-in-law, Lara Trump, is heard offering Manigault Newman $15,000 a month – after she was fired from the White House – for a campaign job requiring her to be “positive.” Lara Trump is a senior adviser on Trump’s re-election campaign.

Manigault Newman also alleges that tape exists of Trump using a racial slur while working on “The Apprentice.” Trump has denied this, saying on Twitter that “I don’t have that word in my vocabulary, and never have. She made it up.”

Copyright 2018 The Associated Press. All rights reserved. This material may not be published, broadcast, rewritten or redistributed.